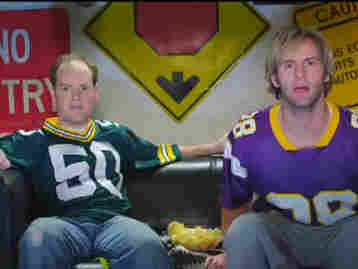 Each year, millions of people tune in to the Super Bowl to cheer their favorite team.

But some people watch just for the commercials, and for them, the 2010 game should be pretty interesting.

This year, CBS is airing an anti-abortion commercial featuring college football star Tim Tebow, with his mother. The ad is sponsored by the conservative group Focus on the Family. Within a few weeks of that ad's approval, CBS turned down a commercial for the Super Bowl produced by a new gay dating site called ManCrunch.com.

The Tebow and ManCrunch ads raise questions about not just what networks want in Super Bowl advertisements, but also what potential advertisers really want from the Super Bowl.

It's Just A Kiss, Right?

The 30-second ManCrunch ad shows two guys on a couch watching a football game. They're rooting for their respective teams. Then, they both reach for potato chips at the same time. Their hands touch. The music builds.

Then they kiss — rather comically.

Dominic Friesen, a spokesman for ManCrunch.com, sees no problem with the ad, which he says cost ManCrunch $100,000 to produce.

"We honestly did not think there would be any issue with the ad," said Friesen. "It's quite harmless. It's not controversial. It's not sensational."

He says CBS made his company wait almost two weeks for a decision on airing the commercial, when other companies screening ads for the game received approvals or denials much quicker. He also says that CBS told ManCrunch no ad spots were left for the game. Actually, CBS was still selling the last of their Super Bowl ads this week.

"I think the greatest disappointment is the discrimination and the anti-gay bias."

But CBS stands by its decision. A statement from the network says that ManCrunch didn't meet the credit requirements to pay for the ad, which would have cost up to $3 million. As a new corporation, the company has a limited credit history.

But ManCrunch says it offered to pay for the ad in cash. However, when asked by NPR to supply documents verifying that an actual cash advance was offered, nothing was provided.

CBS's statement also said the commercial's creative content is not within its broadcast standards. And they classify the ad as commercial, not advocacy, like the Tim Tebow anti-abortion ad.

What Do Fans Want?

Susan Stasney, of Alexandria, Va., says she'll be watching the Super Bowl — but more for the commercials than the actual game. She knows a bit about the ManCrunch controversy, and is not enthused by the ad:

"I wouldn't want to see that as a Super Bowl commercial," says Stasney. "And that really is pushing the envelope of what today's society would be down with."

When it comes to Super Bowl ads, she might actually have a point. A few years ago, candy maker Mars ran a Super Bowl commercial in which two men accidentally kiss while trying to eat the same Snickers bar. The kiss disgusted them both so much, that they started doing "manly" things to make up for the lip lock, like ripping off their shirts and violently yanking hair off their chests. That ad was denounced as homophobic.

The Bright Side Of Denial

This year, ManCrunch is calling on gay rights groups to boycott CBS and the Super Bowl. But the dating site is not the first business to have an ad denied. In fact, Brad Adgate, an advertising expert at Horizon Media, says that some corporations submit ads they know will be denied for the Super Bowl, just for the publicity of the rejection.

"Once in a while, you see companies who wanna get more bang for their investment in the Super Bowl by putting on ads they know are not gonna be accepted by the standards and practices of the network," said Adgate. But often, it's difficult to ever definitively know what an advertiser's motives really are.

Adgate says the big game is one of the last TV shows to reach men and women of all ages. He expects that upward of 100 million people will be watching the Super Bowl this Sunday. And even a denial, with an audience that big, can be good for business.

So, ManCrunch might not have it that bad after all. In fact, since the ad's rejection, Web information company Alexa says Web traffic to ManCrunch.com has almost doubled.