Accessibility links
Toyota Recalls Also Affect Some Older Vehicles Toyota's recall of more than 2 million vehicles involves mostly newer models, but the recall also affects some older cars and pickups, which may have changed hands more than once. Will Toyota be able to track down all those used cars? Turns out it's not as hard as it sounds.

Toyota's recall of more than 2 million vehicles involves mostly newer models, but the recall also affects some older cars and pickups, which may have changed hands more than once. Will Toyota be able to track down all those used cars? Turns out it's not as hard as it sounds.

Toyota's massive recall involves mostly newer models, just a year or two old. But the recall also affects some older cars and pickups, which may have changed hands more than once. Will Toyota be able to track down all those used cars?

NPR's Richard Gonzales say it's not as hard as it sounds.

RICHARD GONZALES: Adam Simms owns a Toyota dealership in Silicon Valley where his staff is getting ready for the onslaught of customers to get their accelerator pedals repaired. Simms says he anticipates operating 24/7 to service as many 7,000 customers.

GONZALES: Of course, some of those repairs will be on cars driven by people who never set foot in Simms' show operating 24/7 to service as many as 7,000 customers.

Mr.�SIMMS: With our case at Toyota Sunnyvale, we can repair probably 300 cars per day.

GONZALES: Of course, some of those repairs will be on cars driven by people who never set foot in Simms' showroom. Let's say you bought your Toyota from someone else, a private party or maybe your uncle's best friend.

Mr.�SIMMS: To make it easy, if you have a car, you can call into any of the Toyota dealerships with a VIN number, give them the year, make and the VIN number, and they'll check that car to see if it's involved in the recall.

GONZALES: The VIN, or vehicle identification number, is a 17-digit number stamped on a small metal plate where the windshield meets the dashboard on the driver's side. It's also on your car registration and filed with your local DMV. Simms says Toyota will use that number to track down used-car owners.

Mr.�SIMMS: Well, you have a license plate on the car, and it's registered at your current address, and most people keep their registrations updated. So they actually have access to that database for recall purposes only. So they will find you through your DMV.

GONZALES: And Simms says his dealership has already started contacting car owners. Toyota is also trying to reach out to customers in this country who may not speak English.

This week, when the company took out full-page ads to apologize for the recall, it included major Spanish-language dailies in Los Angeles, Miami and New York. And on its Spanish-language Web site, you can see Toyota's U.S. chief Jim Lentz repeating his apology, this time with Spanish subtitles.

Mr.�JIM LENTZ (President of U.S. Sales, Toyota): Toyota has always prided itself on building high-quality, durable cars that customers can depend on, and I know that we've let you down.

GONZALES: And tomorrow, Toyota says its video subtitles and translations of its English-language Web site will be offered in Korean, Vietnamese and Chinese.

But the nitty-gritty of what a non-English-speaking Toyota owner should do is still largely left to the ethnic media.

GONZALES: Here, Spanish-language WXTV in New York, who had a feature on how to respond to a malfunctioning accelerator pedal.

Mr. JOSE PUENTE (General Manager, autotrader.com Latino): Well, what we've seen is that the new and used Toyota shopping activity actually has gone up as the recall news has come out. The consequence of that is because maybe people are trying to get better deals. You know, Toyota's got a legacy of quality.

GONZALES: It's not unusual for consumers to go bargain-hunting when a product has a public relations problem, and that ultimately could work out for Toyota in the long run.

SIEGEL: Toyota is not the only automaker dealing with a fix. Today, Ford announced it will update more than 17,000 Mercury Milan and Ford Fusion hybrids whose brakes the company says can give drivers the impression of failing. The company assures drivers that they are never without brakes, though they may perceive a drop-off in braking power during a transition between two braking systems. The repair involves a software, not a hardware fix. 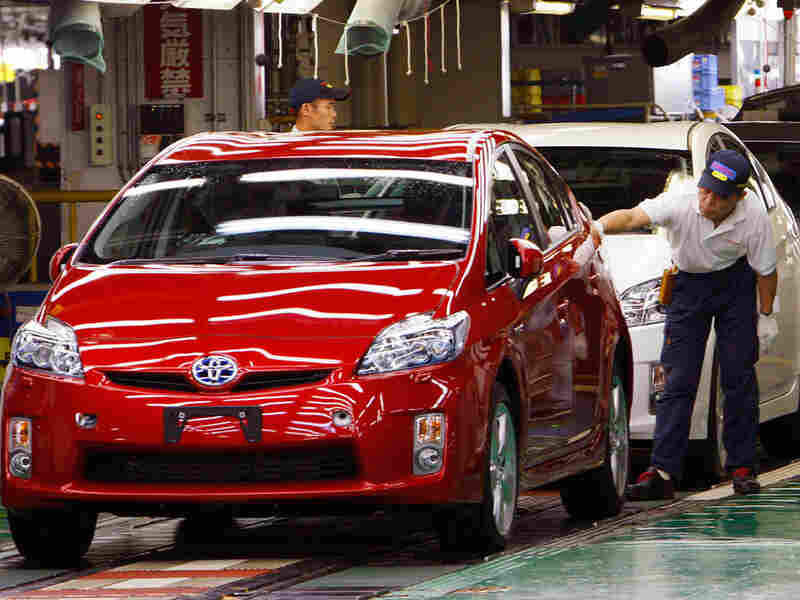 The Transportation Department has begun an inquiry into the 2010 model of the popular Toyota hybrid. Shizuo Kambayashi/AP hide caption 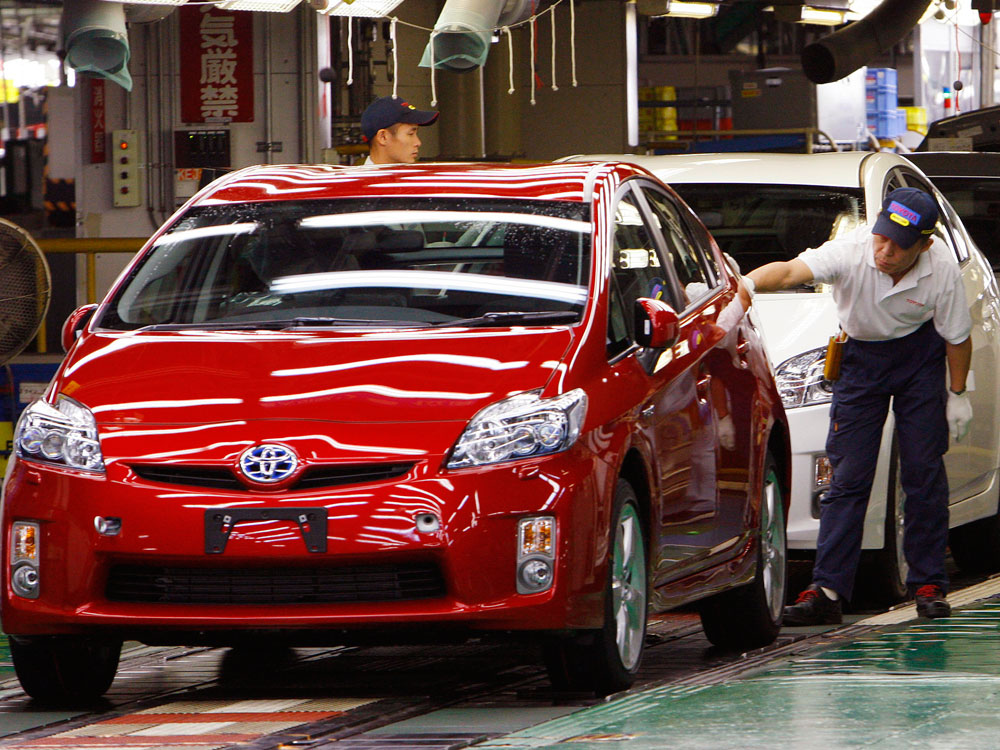 The Transportation Department has begun an inquiry into the 2010 model of the popular Toyota hybrid.

The Transportation Department said Thursday it will investigate brake problems in the 2010 Toyota Prius after the automaker acknowledged a defect and its recent recall of several of its most popular late-model vehicles for accelerator problems.

Toyota Motor Corp. confirmed that a design problem with the anti-lock brake system on its new-generation gas-electric Prius caused some drivers to experience a brief lag time when they hit the brakes.

"Safety is our top priority," said Transportation Secretary Ray LaHood. "We will continue to monitor these issues closely." On Wednesday, LaHood startled the public with a comment, which he later retracted, that Americans should park their recalled Toyotas unless driving to dealers for accelerator repairs.

There are reports that Toyota will recall 270,000 Prius hybrid vehicles over brake problems in the United States and Japan. Japan's top business newspaper, Nihon Keizai, said Friday that Toyota will soon notify Japan's transport ministry and the U.S. Department of Transportation of the recall.

The investigation is the latest in a series of headaches involving possible safety defects that have rocked the Japanese automaker and could ultimately cost it $2 billion.

The National Highway Traffic Safety Administration, or NHTSA, which would conduct the Prius investigation, says it has received 124 complaints from owners of the vehicle, including four allegations that crashes occurred as a result of the alleged defect. NHTSA officials say the reports allege a momentary loss of braking capability while traveling over an uneven road surface, pothole or bump. The Japanese government has announced a similar investigation.

Toyota officials say they have rewritten the software that controls braking to deal with the reported problems and are still considering what steps to take in fixing the problem. Whether a recall is necessary for the Prius was still undecided, according to Toyota executive Hiroyuki Yokoyama, but Japan's transport minister urged the company to consider it and is ordering an investigation.

Two congressional committees on Capitol Hill plan hearings this month on the recalls.

"I am in no way certain that Toyota's explanation for the cause of incidents of sudden acceleration in its vehicles satisfies me," Rep. John Dingell (R-MI) said on Wednesday.

Toyota for the first time gave an estimate of the costs of the global gas pedal recall. The $2 billion total represents $1.1 billion for repairs and $770 million to $880 million in lost sales. The automaker expects to lose 100,000 in vehicle sales because of the recall fallout — 80,000 of them in North America.

Toyota on Thursday reported a $1.7 billion profit for last quarter.

NHTSA has been criticized for failing to properly investigate complaints about Toyota that date to 2003. The agency opened several investigations but always closed them without a call for the company to act.

"I think they were behind the eight ball for a couple of years," Joan Claybrook, who headed NHTSA during the Carter administration, told NPR.

"There were complaints that came in, they opened investigations, Toyota gave them answers and they closed the investigations. I think as a result, some people have been killed and injured that wouldn't have otherwise," she said.

Also Thursday, Ford Motor Co. announced plans to fix 17,600 Mercury Milan and Ford Fusion gas-electric hybrids because of a software problem that can give drivers the impression that the brakes have failed.

The automaker says the problem occurs in transition between two braking systems and at no time are drivers without brakes.

The decision to fix the 2010 model cars came after a test driver for Consumer Reports magazine experienced the problem as he was driving a Fusion Hybrid.

Deep says Ford will notify the car owners to bring their cars in for a software fix. He said there is no safety problem with the cars. The automaker called the repairs a "customer satisfaction program" and said it was not a full-fledged recall. Deep said Ford reported the problems to a U.S. safety agency, the National Highway Traffic Safety Administration.

The move comes on the same day that NHTSA began an evaluation of braking problems on the 2010 Toyota Prius hybrid. With the Prius, antilock brakes can fail momentarily while the car transitions between its gasoline and electric motors.

Ford told dealers about a fix on Thursday. They already had the software to repair it in case it came up, Deep said.