Accessibility links
Adapting Vaccines For Our Aging Immune Systems Vaccines can be a crucial line of defense for older people, who are more likely to suffer complications from infections such as the flu. Our immune system weakens over time, and so does our response to vaccines. But researchers have found ways to create stronger vaccines that work better in older people. 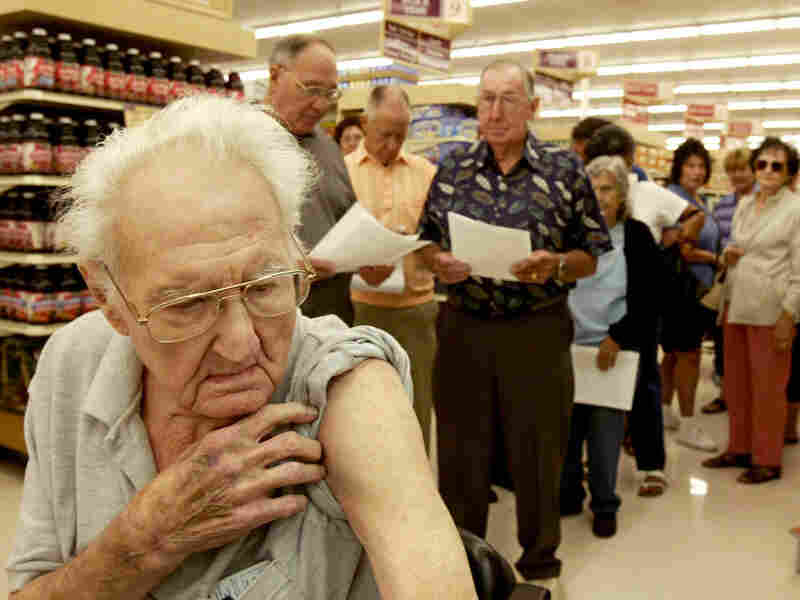 A weakening immune system makes inoculations both more important and less effective for the elderly. But scientists can "trick" the immune system into a younger response by adding a little extra oomph to vaccines for older people via chemicals called adjuvants or larger doses of the vaccines. Nick Ut/AP hide caption

Much of the talk of vaccines typically focuses on young children. But older adults can also benefit from the protective effects of vaccines. In fact, flu and pneumonia vaccines can be critically important for older people, who are far more likely than their younger counterparts to suffer severe complications from such infections. They are more likely to be hospitalized and even die.

Still, while vaccine protection can be even more important for older individuals, it's less effective than it is in children and younger adults. As we age, our immune systems wear out, just like our muscles and bones.

"As people age, their immune response isn't as robust," says Dr. Stefan Gravenstein, a professor of medicine at Brown University who specializes in geriatrics and basic biology. "The pieces of the immune system that need to be able to work are still functional, but they're just not as peppy" as they used to be.

How Our Body's Defense System Works

To understand what happens to the immune system as it ages, it's useful to understand how the younger immune system responds to a vaccine. The flu shot, for example, is made up of little pieces of one or more flu viruses. As soon as the virus enters our body, the body sends out special immune system cells to investigate.

VIDEO: How Our Immune System Works

If the immune cells recognize the virus or bacteria as foreign and potentially dangerous, they begin to mount an immune response, developing a way to make copies of the cells that recognize that same foreign substance. They make lots of copies, says Gravenstein, and then spread them throughout the body, sort of like a "refined surveillance system" searching the bloodstream for enemies.

At the same time, some of these immune system cells also begin to make antibodies, which are like little flags that literally attach themselves to the foreign invader, alerting the rest of the immune system to their exact location. At this point, the immune system "killer cells" go into action. There are a number of ways these cells can destroy an invading virus or bacteria.

Some perforate the surface of the virus or bacteria, literally punching holes in it and causing it to burst apart. Others absorb the remains of the foreign invader and use their enzymes to literally chew it up. A vaccine actually "trains" the body's immune system to build up defenses and be ready for battle should the "real" virus or bacteria invade.

Changing Vaccines For The Older Body

But somewhere between your 50s and 70s, the whole immune reaction begins to lose pep and make fewer cells: fewer surveillance cells, fewer antibodies and fewer killer cells. That isn't as gloomy as it sounds, says Gravenstein. "We now have biologic tricks we can play on the immune system" to make it behave as if it were young.

For starters, chemicals called adjuvants can be added to vaccines to stimulate the immune system to produce more antibodies and more killer cells. Vaccines can also be given in bigger doses. Infectious disease specialist Ann Falsey, with the University of Rochester in New York, recently headed a study of 4,000 people over 65. One-third got a standard flu vaccine, and two-thirds received a vaccine that was four times the usual dose.

"The group who received high-dose vaccine had significant better antibody response, about twice as good as the group who got the usual vaccine," she says. The side effects were minimal: "a little more in the way of a sore arm, a little more redness and a little more swelling, but generally it was quite well tolerated."

And there's one final strategy to better protect older Americans. Dr. Kenneth Schmader, chief of the division of geriatrics at Duke University School of Medicine, says getting younger people vaccinated against the diseases that harm older people can make a big difference. He points to recent experiences in communities where children were immunized against flu and pneumonia. In these communities, there was significantly less infection among seniors.

Schmader adds that health care workers, particularly those in institutionalized settings who work around older adults, should also be vaccinated.