Accessibility links
In New Orleans, Rise Of Saints Symbolic Of City Can a football team breathe life into a city? Saints fans think so. For many, their team's long climb to the Super Bowl is symbolic of New Orleans' ongoing struggle to recover from Hurricane Katrina. 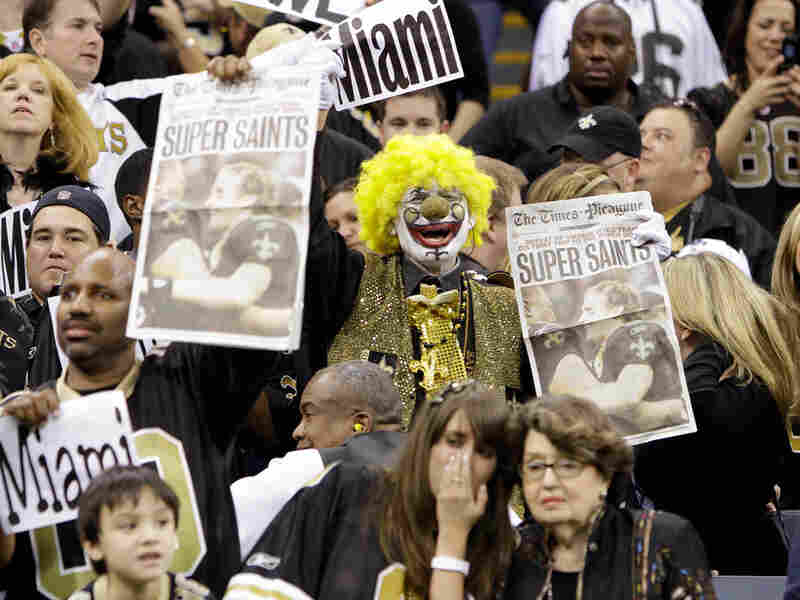 The New Orleans Saints are headed to the Super Bowl for the first time and excitement over the football team has raised the spirits of the city. Bill Haber/AP hide caption 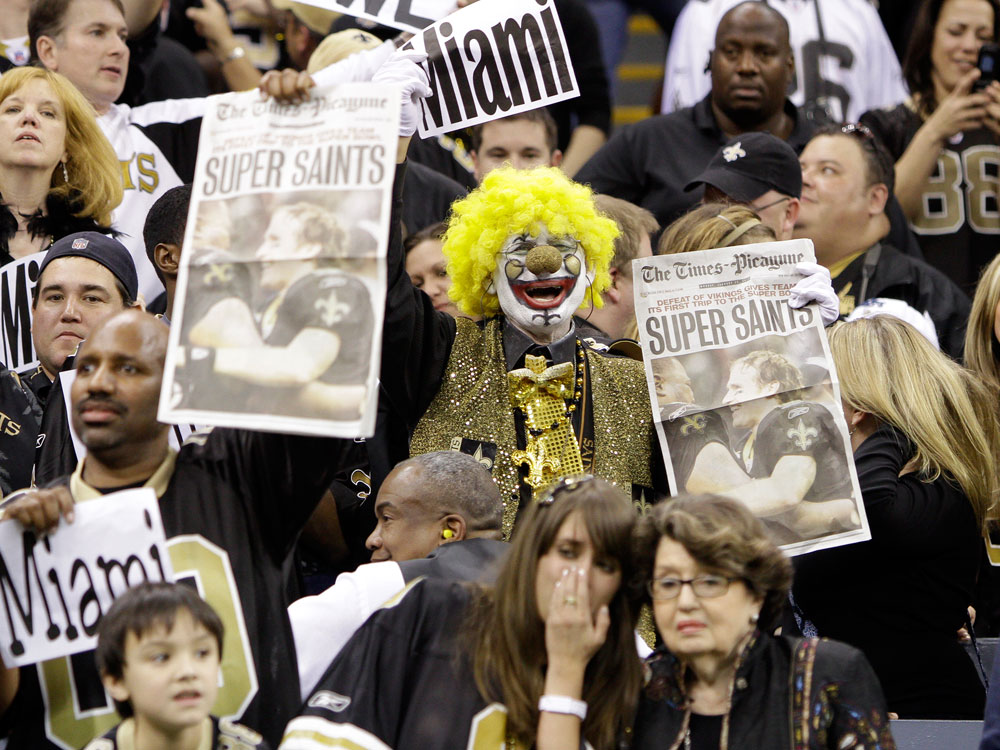 The New Orleans Saints are headed to the Super Bowl for the first time and excitement over the football team has raised the spirits of the city.

This might help you understand just how big the Super Bowl is in the Big Easy: some of New Orleans' finest restaurants are closing on Sunday evening.

And on the first big weekend of Carnival, parades have been rescheduled around the big game, which matches New Orleans' beloved Saints against the Indianapolis Colts.

And while voters here are choosing a mayor Saturday, even mayoral candidate Mitch Landrieu is still reveling in that overtime field goal that sent the Saints to Miami.

"Everybody without thinking about it reached out and held their neighbors' hands and the entire stadium was holding hands at the time that that ball actually went through the uprights," Landrieu recalls. "It was extraordinary. One of the greatest moments of my life. It was cathartic."

For many, their team's long climb to the Super Bowl is symbolic of New Orleans' ongoing struggle to recover from Hurricane Katrina.

Fans here have been wandering in the football desert for more than 40 years. They donned paper bags for a while — about the same time the paper-bag-masked Unknown Comic was a fixture on The Gong Show — but the "Aints" of old are no more.

Now it's a Who Dat nation.

Over lunch at the Cafe Reconcile this week — a training ground for inner city youth — diners contemplated what the Saints mean to the city.

"They have lifted our spirits," says Katie Hall, sharing a meal of crab cakes, collard greens and corn bread with her husband Joseph. "The spirit of the Saints becoming winners indicate that we as a city can become a winner."

One of those New Dats, as they're called is 18-year-old waitress Nyeshia Windsor.

She's no football fan, she says, but thinks the Saints' success has been healing for a city often divided by race.

"People don't care if you're black, white or Asian or whatever," Windsor says. " Everybody come together cause they happy about the Saints winning. "

The joy is contagious — from a pilot-led chorus of Who Dats on a flight bound for New Orleans, to the billboard on I-10 that counts down the days, hours and minutes until kickoff.

At a campaign event at the House of Blues this week, jazz pianist Alan Touissant shared the spirit.

"Who Dat? Who Dat? That's what I say! This is the next biggest news since Katrina," Touissaint says. "What a transition."

Touissaint says this celebration is "fitting and proper."

"We've seen some weird days following the Saints," he says. "But through it all it's been jolly and it's been a party. And of course, this is the biggest party ever."