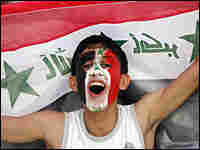 An Iraqi fan cheers for his team before the start of the final match of the Asian Football Cup 2007 between Iraq and Saudi Arabia at the Bung Karno stadium in Jakarta on Sunday. Adek Berry/AFP/Getty Images hide caption

This time, the rifle fire in Iraq was a sign of celebration, not violence. Iraqis also wept and honked their horns. It was all in response to a soccer victory yesterday in the final of the 2007 Asia Cup. It happened in Jakarta, Indonesia, against Saudi Arabia. Late in the game, an Iraqi Kurd kicked the ball to a Sunni Arab, who knocked it with his head into the net. Final score was one-zip.

Let's meet a fan of the Iraqi team known as the Lions of the Two Rivers. Hassan al-Khalidy is a 24-year-old doctor of oral surgery at Baghdad University.

Dr. HASSAN AL-KHALIDY (Oral Surgery, Baghdad University): Most of the Iraqi people get down to the streets, and celebrating in these events. The scene in Baghdad was so hopeful. Even there is a curfew in Baghdad, so the moving of the cars is prevented because of the bad events which happened before, after the match against South Korea when the Iraq team win, and there's two suicide car bombs in Baghdad.

INSKEEP: You're saying that in a previous event, when Iraq won a major soccer match, there was violence - almost a violent response. There were car bombs. There was a curfew this time, and despite that, people went out into the streets and celebrated again Iraq's victory against Saudi Arabia.

INSKEEP: Where do you watch this game, which was played in Indonesia?

Dr. AL-KHALIDY: We watched it by the TV.

INSKEEP: Did your whole family get together in front of the television set?

Dr. AL-KHALIDY: Yes. I am with my family, but I am talking about the celebration after the end of the match, after the winning of the cup.

Dr. AL-KHALIDY: Okay. After that, when we win, many people are crowded streets, celebrating by this great, great victory. And we are so happy. We didn't taste the happiness before four years. But especially in this day, we forget everything. We forget our sadness. We forget the differences between us, between the groups of Iraqi. All of us are celebrating.

INSKEEP: Why is it that this game - this one game would be so important to so many Iraqis?

Dr. AL-KHALIDY: Because it's through, the final match, and this the first time that we win the Asian Cup. And in this bad situation, everything is not prepared for us. There's no stadium. There's no preparation for the Iraqi team. But despite all of this, we win and we play, and this victory will make the Iraqi people unite.

INSKEEP: May I ask if it is important to you that the three frontline players were an Iraqi Kurd, a Sunni Arab and Shiite Arab?

Dr. AL-KHALIDY: Sure, sure. As a team, the Iraqi team, the players in the match, there are Sunni and Shia and Kurdi playing with each other to reach the victory, so this will give the (unintelligible) people, Iraqi people, to think more about how to rebuild Iraq, how to make this country strong, like the past.

INSKEEP: What will people look forward to now that the match is over?

Dr. AL-KHALIDY: I just - I have a hope in this, that there is not another killing, there's no destruction. But I see that we are united, my friends and my family and my neighbors are Sunni and Shia or Kurdi. We are just one family. But the problem, the enemy's outside Iraq, not inside Iraq.

INSKEEP: He's a 24-year-old doctor of oral surgery at Baghdad university, and one of many Iraqis who followed his country's victory in the 2007 Asian Cup Soccer Tournament.