New British Prime Minister Gordon Brown is meeting with President Bush en route to a stop at the United Nations. His first month in office has seen terrorist attacks, widespread flooding and change on the global political scene. Jonathan Freedland, a columnist for London's Guardian newspaper, tells Steve Inskeep how the prime minister has dealt with the challenges of his first month in office. 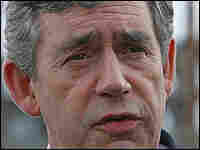 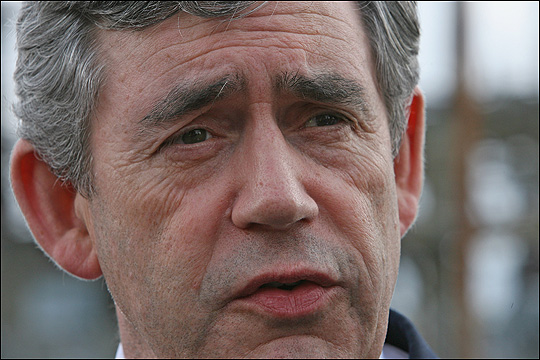 Gordon Brown, shown here July 25, will stop in Washington before moving on to the United Nations.

British Prime Minister Gordon Brown arrived in the U.S. Sunday as part of his first major overseas tour since succeeding Tony Blair a month ago.

He visited President Bush at Camp David Sunday and will meet other officials on Monday before he heads to New York.

The visit comes amid much speculation that relations between Britain and the United States may not be quite as warm under Brown as they were under Blair.

One of Brown's closest allies, Trade and Development Secretary Douglas Alexander, gave a speech in Washington earlier this month that appeared to be critical of the United States. Alexander called on the U.S. government to rely more on so-called "soft power" than on military might.

This accompanied Brown's appointment of the former deputy secretary general of the United Nations, Mark Malloch-Brown, to his Cabinet. Malloch-Brown has been publicly critical of the war in Iraq and of the Bush administration.

"Gordon Brown knows that his political future depends on being able to demonstrate that his government is different from his predecessor," Curtice says. "He knows that domestically, the invasion of Iraq is regarded as probably Tony Blair's biggest mistake. He knows he needs to distance himself for his domestic audience ... Gordon Brown will be wanting to demonstrate that his relationship is not as close as Blair's."

As well as being less keen on pre-emptive military intervention, Gordon Brown is known to hold different views than President Bush on other issues — such as climate change — that are likely to arise in the talks.

But despite the need to distance himself from George Bush personally, observers do not expect links between the two countries to suffer too much.

Brown has stopped using the phrase "War on Terror," but he has made clear that he will be no softer on terrorism issues than Blair — and he has refused to set a date for the withdrawal of British troops from Iraq.

Wyn Grant, a professor of politics at Warwick University, says Brown's natural leaning is certainly much more towards the U.S. than towards Europe.

"Clearly there are people in the Foreign Office who would like [Britain] to have a closer relationship with Europe, but Gordon Brown is not a great enthusiast for Europe. He's a person in the past has had close, personal links with the U.S., and it remains closest," Grant says.

"For a long time he used to go for his holidays to Cape Cod, and he used to meet there with members of what one might call the East Coast intelligentsia of the United States. And quite a few of the ideas which came into New Labour in terms of modernization — welfare-to-work and so on — were ideas that eminated from the United States."

In the end though, with just 17 months of President Bush's term left to run, Curtice says that this trip, and relations in the coming months, may not be so much to do with the Bush-Brown relationship anyway.

Nobody expected the left-of-center Tony Blair to become so close to the Republican President Bush, so who knows if a surprising chemistry could emerge between the dour Scot and the back-slapping Texan.

And while Iraq and Afghanistan are expected to dominate the conversation, there are other important issues — on trade and assisting Africa — that both men share.

But perhaps, symbolically at least, Gordon Brown's more multilateral instincts are best shown by his destination after meeting with President Bush on Monday: He goes to the United Nations in New York to meet U.N. Secretary General Ban Ki-moon.