Accessibility links
Who Needs A Running Back To Win The Super Bowl? One thing football fans hear over and over again is that a team must run in order to be successful. You can't win in the NFL without a ground game, TV experts still say. But that doesn't seem to be the case in the Super Bowl, and it doesn't seem to be the case overall in the NFL. Running, as a means to victory, is under aerial assault from the passing game. 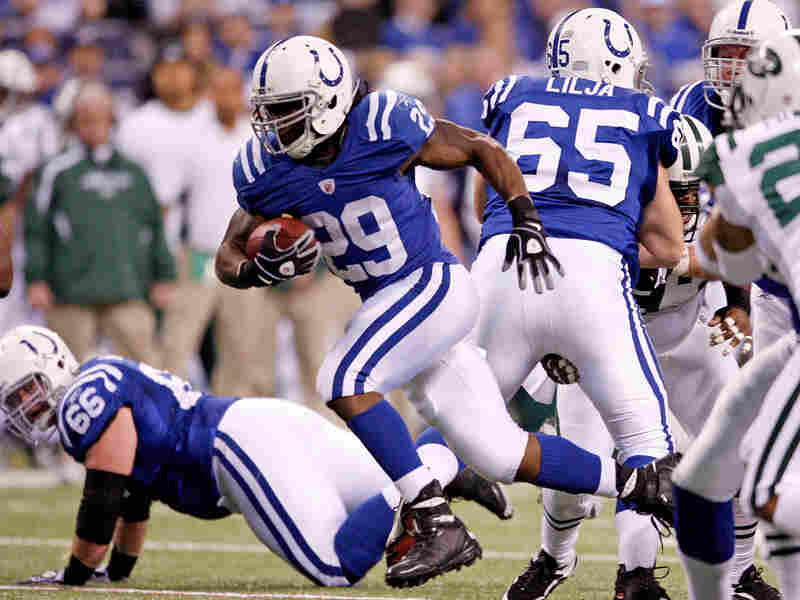 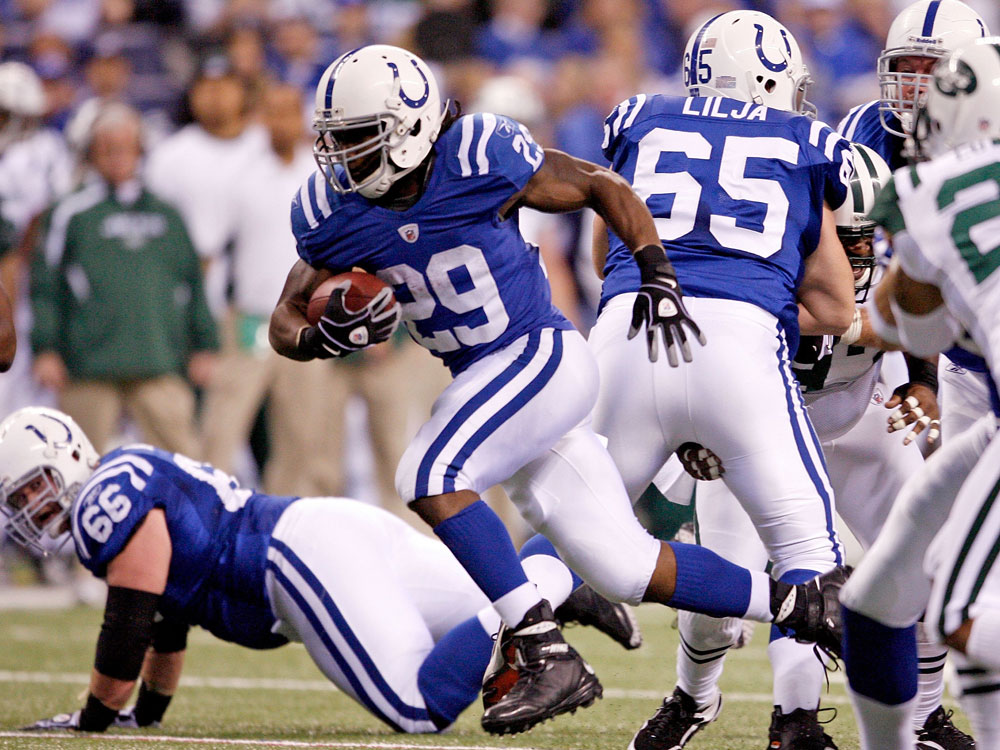 Indianapolis Colts running back Joseph Addai has only racked up 828 yards this season.

Ask any retired NFL player. The old guard always had it tougher, even if the old guards were a hundred pounds lighter than the current offensive linemen. So, this memory from Joey Browner, a legendary defensive back for the Minnesota Vikings in the '80s and early '90s, should be taken with a grain of smelling salt.

"If the quarterback got hit and knocked out, you had to go get the water boy," Browner says. The quarterback, in other words, wasn't quite as important back then.

However, Browner does have a point. Over the years, rule change after rule change has stymied the defense and emboldened the passing game.

Karl Mecklenburg, who played with the Denver Broncos during the same era as Browner, recalls his bag of tricks being gradually depleted.

"Back in the day ... you just put your arms up. You could run over the quarterback. It wouldn't be roughing or anything. My last year, I got caught and fined for that, so I stopped."

The rule changes didn't open up the passing games by themselves. But like clever investment bankers operating in the wake of deregulation, coaches began to find loopholes they could exploit. Green Bay Packers running back Ryan Grant sees it every day in practice.

"Right now, there's more emphasis on making plays more interesting because you have more guys. If you have a pass play, there's five guys you can get the ball."

Grant ran for more than 1,200 yards this year — or 50 percent more than any running back in today's Super Bowl. On the pass-happy Packers, though, he is still but a complementary piece.

"Passing is taking over, because it's the fastest way to get into that end zone," Grant says.

"I think we've seen as of late you don't need to run anymore," Tucker says. "I'm only 30, so I'm not exactly old school, but as a lover of the physicality of football, it's a little disheartening. It's a little bit upsetting."

Miami Dolphin great Mercury Morris is old school; he and his backfield mates ran into the record books as the only undefeated team in football history. He says the current aerial ways of the NFL isn't worse than the football played in his day, but he doesn't seem to mean it.

"The quintessential concept is to be able to run the football, and if you can't run the football now, you have to pass," Morris says. "Every time I see a team third-and-three, third-and-four, they don't think they have what it takes to handle a team upfront in the basic law of nature, which is fight or flight."

But now it's fight or take flight, which is still denied by a lot of the football commentators you see on TV. Merrill Hoge and Rich Gannon, both fine players in their day and now excellent analysts, said a team has to be multidimensional, and put the Colts in that category. That's the Colts — the worst running team in the NFL. If they can run enough, then anyone can.

But there's an appeal to the running game that strikes at the heart of the football man. Former Steelers quarterback Jim Miller hints at it.

"It's kind of the old last frontier, where men can be men and we're just out there getting physical, playing our sport, and they couldn't stop us — and that it's demoralizing for a defense when you beat them physically."

Miller notes he recently heard the architect of those demolitions, his old coach Bill Cowher, say he'd rethought the importance of the running game.

"I hate to say this," Cowher said on CBS, "but the running game is a complement." If Cowher's given up on the ground, you know change is in the air.