Accessibility links
Connecticut Gas Power Plant Explosion Causes Deaths, Injuries At least five people died and 12 more were injured after a massive gas line explosion at a power plant in Middletown, Conn., the city's mayor said. But officials acknowledge they don't yet have a clear idea of the death toll. 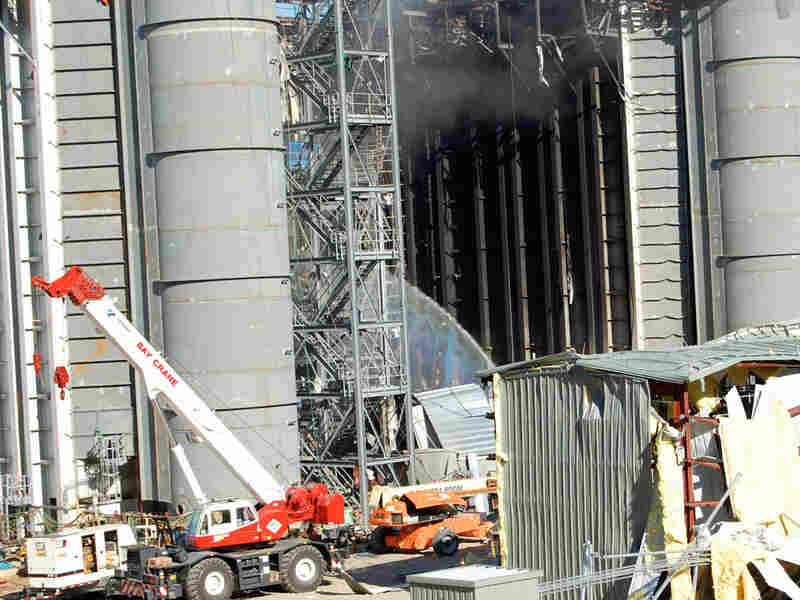 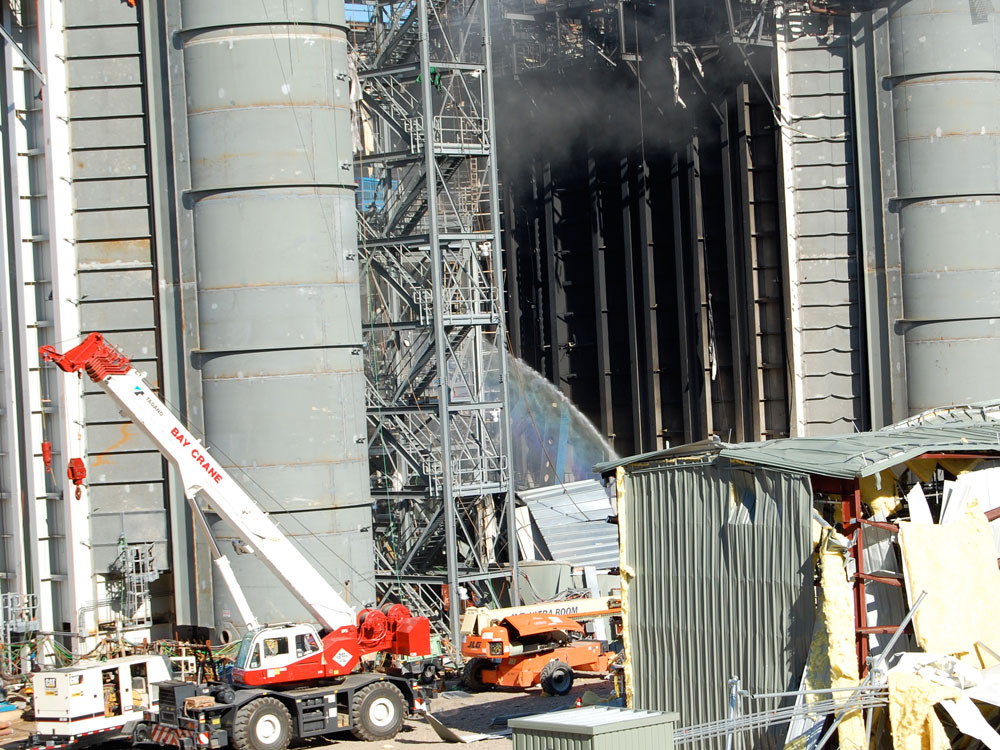 An explosion that sounded like a sonic boom blew out walls of an unfinished power plant and set off a fire during a test of natural gas lines Sunday, killing at least five workers and injuring a dozen or more.

The explosion at the Kleen Energy Systems plant in Middletown, about 20 miles south of Hartford, could be heard and felt at least as far away as 10 miles from the plant.

Deputy Fire Marshal Al Santostefano told The Associated Press on Sunday night that no one was known to be missing amid the rubble from the damaged plant. Still, crews planned to spend all night going through debris in case there were any more victims. The cause of the gas explosion was unknown, and the investigation was to begin Monday morning, he said.

The explosion left huge pieces of metal that once encased the plant peeling off its sides. A large swath of the structure was blackened and surrounded by debris, but the building, its roof and its two smokestacks were still standing. Rescue crews had set up several tents alongside the site, which is a few miles from Wesleyan University on a wooded and hilly 137-acre parcel of land overlooking the Connecticut River.

"It felt almost like a sonic boom," Giuliano said at an evening news conference.

Hilary Phelps was in her garage about a mile away from the site when she heard the boom.

"It sounded like the garage door had fallen off their tracks, and I felt the windows in the garage shake," she said. "I found out that several people in town had windows that were damaged and things knocked off of walls as a result of the explosion."

Santostefano said 50 to 60 people were in the area at the time of the explosion, and multiple contractors were working on the project, making it difficult to quickly account for everyone.

One of those killed was Raymond Dobratz, a 58-year-old plumber from Old Saybrook, said his son, Erik Dobratz, who called the elder man "a great dad."

The 620-megawatt plant — a mid-sized, gas-fired facility — is located along the Connecticut River in an industrial area of Middletown. It is being built to produce energy primarily using natural gas. Santostefano said workers for the construction company, O&G Industries, were purging the gas lines, a procedure he called a "blow-down," when the explosion occurred.

Officials had not released the conditions of the other injured people by Sunday evening, although they said at least a dozen people had injuries ranging from minor to very serious.

Sky-high flames and billowing black smoke were seen coming from the plant. Neighbors say windows were blown out from the impact, and blinds were knocked off walls.

The Rev. Dave Franklin was at the Emmanuel Tabernacle in Christ Church, about a mile and a half down the road.

"It felt like an earthquake," he said. "We knew something tragic was happening."

Work on the plant was 95 percent complete, the mayor said. Kleen Energy Systems LLC began construction on it in February 2008. It had signed a capacity deal with Connecticut Light and Power for the electricity produced by the plant, which was scheduled to be completed by mid-2010.

Gov. M. Jodi Rell visited the scene Sunday and announced late in the day that the state had imposed a temporary no-fly zone for a three-mile radius around the site to ensure that the safety of the search and rescue workers would not be jeopardized. The restrictions were put in place until Monday evening.

The state's Emergency Operations Center in Hartford also was activated, and the Department of Public Health was called to provide tents at the scene for shelter and medical triage.

Daniel Horowitz, a spokesman with the U.S. Chemical Safety Board, said the agency is mobilizing an investigation team from Colorado and hopes to have the workers on the scene Monday.

Material in this report comes from The Associated Press; NPR's Tovia Smith in Boston; and WNPR's Diane Orson in New Haven, Conn., and Nancy Cohen in Hartford.