Accessibility links
Safety Risks At Regional Airlines Detailed By PBS The crash of Continental Flight 3407 last February — in which 50 deaths were attributed to pilot error — sparked an inquiry that found safety problems. Among them: long hours and low pay at regional carriers, where some pilots become captains with less than a year of experience. 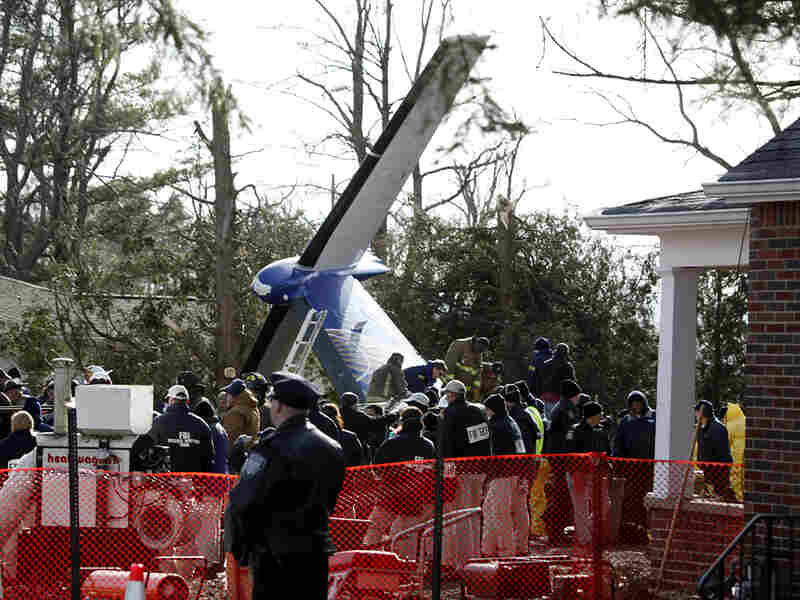 Workers clear debris from Continental Connection Flight 3407, which crashed Feb. 12, 2009, in Clarence, N.Y. The plane crashed as it approached the Buffalo airport, killing all 49 people on board and one on the ground. David Duprey/Getty Images hide caption 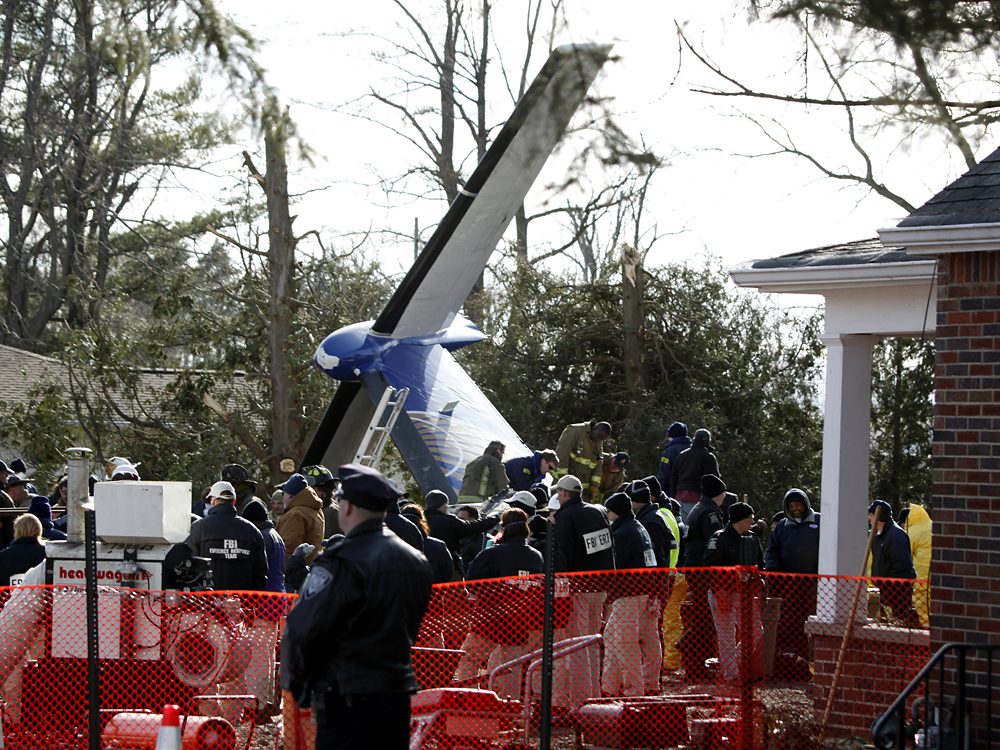 Workers clear debris from Continental Connection Flight 3407, which crashed Feb. 12, 2009, in Clarence, N.Y. The plane crashed as it approached the Buffalo airport, killing all 49 people on board and one on the ground.

The crash of Continental Connection Flight 3407 last February — in which 50 deaths were attributed to pilot error — exposes widespread safety problems linked to lax regulation, according to an investigation by PBS.

Among the risks found in the Frontline report: long hours and low pay at regional carriers, where some pilots become captains with less than a year of experience.

As PBS correspondent Miles O'Brien tells NPR's Renee Montagne, the incident highlights the dangers of a trend that has grown in the past 15 years: the outsourcing of short routes from large carriers to more obscure local airlines. The problem, he says, is that large airlines do little to ensure their business partners' safety standards.

For instance, Continental 3407 was operated by Colgan Air. But the relationship between the two partner airlines — one large and well-known, the other small and regional — is mostly symbolic.

"Continental may put its logo on those planes," O'Brien said, "but it does not get involved in how those airlines run their operations. How they do safety, how they schedule crews, how they pay their crews is all left to the smaller company."

And if things do go wrong, O'Brien said, the relationship also gives large carriers a safety net: All liabilities for outsourced flights are assumed by the smaller airlines.

Big Problems At A Small Airline

In the case of Continental 3407, the captain piloting the flight lacked experience, and had previously failed performance tests. And the first officer on the flight was likely exhausted from commuting from Seattle to her base of Newark, N.J.

New to the job and making less than $20,000, the co-pilot was living with her parents to save money, O'Brien said. And to work the Buffalo flight, she had slept on a chair in the pilots' lounge at Newark after traveling all night from Washington state.

"It's not exactly the scenario that makes a pilot bright-eyed and bushy-tailed, and as alert as they could be," O'Brien said.

The Frontline piece also includes an interview with Chris Wiken, a former Colgan Air captain who says that his first officer on one flight was a man who had been in his "new hires" orientation class.

"We were brand-new to the airline game," Wiken says in the interview, "nine months in."

The Federal Aviation Administration has one set of rules for both large and small carriers, O'Brien said. The difference is that the large airlines exceed federal standards for work rules, pay and safety.

But the small carriers are operating at the lower limits of those rules, O'Brien said.

The FAA says it is working on improving its standards for preventing pilot fatigue and other safety risks. But, O'Brien said, critics often accuse the FAA of having a "tombstone mentality," where rules are changed only in the wake of a deadly crash.

The agency is also seen as being in a position where it serves as both a booster and a regulator for the aviation industry — "which is an inherent conflict of interest, of course," O'Brien said.

Still, in the wake of the crash of Flight 3407, rules changes may soon come, "so that we can make these smaller carriers, these outsource carriers, a little more safe," O'Brien said.