Accessibility links
Storm Socks Midwest, Takes Aim At Mid-Atlantic The second major snowstorm in less than a week was bearing down toward the region, where plows still hadn't touched some roads, utility workers were struggling to restore power, and shovels were in short supply. The storm could dump more than a foot of snow on top of the nearly 3 feet already on the ground in many areas. 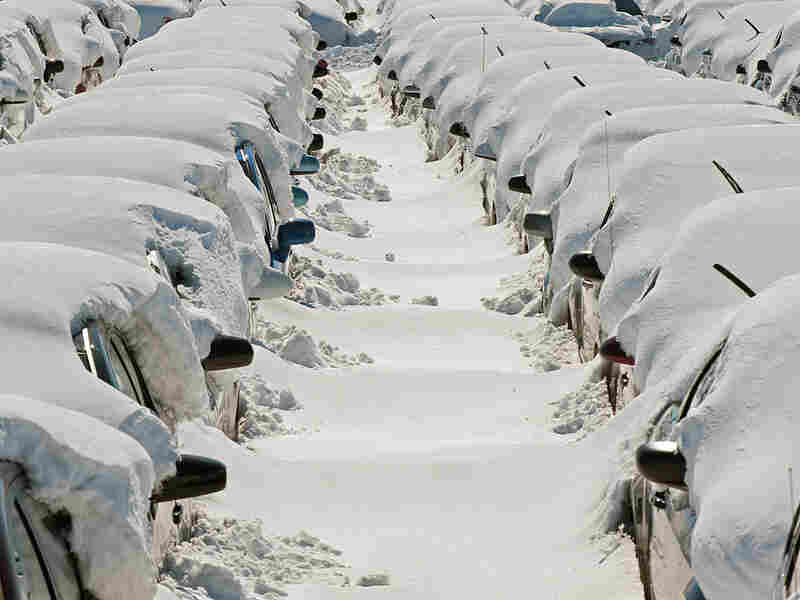 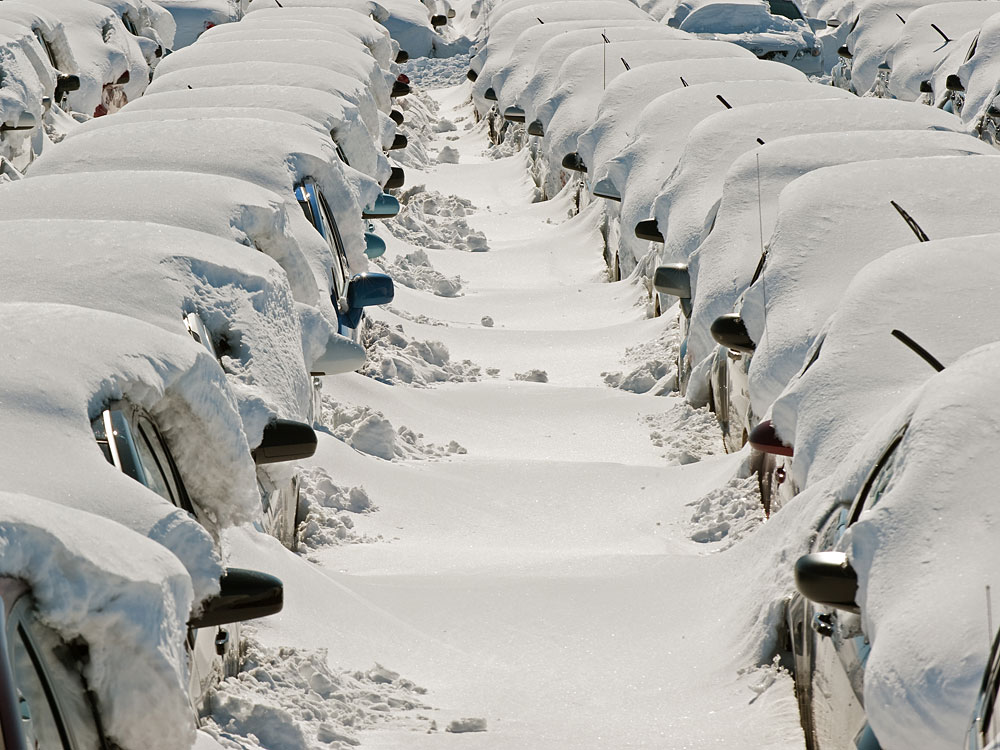 Rental cars buried deep in snow waited to be dug out at an auxiliary lot at Dulles International Airport, one of Washington, D.C.'s two main airports. The airports warned of more flight cancellations Tuesday.

A major snowstorm socked the Midwest and took square aim at the mid-Atlantic states Tuesday, where it was expected to intensify and dump more than a foot of snow on top of the nearly 3 feet already on the ground in many areas.

The latest storm hit the Midwest early, closing schools and greeting commuters with slick, slushy roads from Minneapolis and Chicago to Louisville, Ky. Hundreds of flights were canceled at Chicago's airports as the storm moved across Illinois, where up to a foot of snow was forecast.

Powerful winds and snow were expected to hit mid-Atlantic states by the evening and could leave as much as 20 inches of new snow in Washington and 18 inches near Philadelphia — a Northeast travel hub — by Thursday morning. New York City announced students would have a rare snow day Wednesday, only the third in six years.

For several major cities, the new storm should ensure that this year's snowfall surpasses anything recorded for a single winter since 1884, the first year national weather records were kept.

With hundreds of thousands of residents in the East still digging out from this weekend's massive storm and tens of thousands still without electricity, many people were losing patience as they girded for the next round of what has been dubbed "Snowmageddon" or "Snowpocalypse."

"Getting around is a pain right now as it is, so slushy and sloppy," said Meghan Garaghan, 28, as she stocked up at a supermarket in Philadelphia, which got 27 inches of snow. "I don't want to think about what it's going to be like with another foot and a half of snow dumped on top of this mess."

The storm that began Friday closed businesses and schools and shut down the government for two days running. Some 230,000 federal workers in Washington were told not to report to work Monday and Tuesday; the Senate met for only a few minutes Monday, and the House called off floor votes Tuesday.

Utility companies said the deep snow was hindering some crews trying to fix damaged power lines before the next storm hits.

Planes and trains out of many cities were still difficult to come by, while those traveling by automobile encountered roads still choked with snow and ice. Hundreds of flights were canceled at Chicago's O'Hare Airport. In Washington, there were long lines at the region's two main airports as carriers struggled to accommodate the huge backlog of people whose flights were scuttled over the weekend. Airports warned of more cancellations Tuesday.

The Metrorail subway system in the Washington area was running, but officials warned that the system could close early Tuesday in anticipation of the latest storm. In Baltimore, the city's subway was running regular service again and there was limited service on some bus routes. Commuter trains between New York and New Jersey were also running limited service.

Many local governments say this storm will put them over budget for the year on snow removal.

Snow shovels, road salt, propane and other emergency items were still flying off the shelves at hardware stores across the region.

"I have to say, it's almost impossible to keep up with this," said Gordon Clement, owner of Clement Hardware in Severna Park, Md.

Clement said he had an inventory of 1,000 snow shovels on hand since 2006 that have all been snapped up since the weekend storm. Propane and kerosene heaters, fuel, wood logs and generators were also going faster than he could restock, he said.

"We're expecting a truck about noon," Clement said. "I expect people will be waiting in the parking lot for it to arrive."