Accessibility links
Remembering Director Ingmar Bergman The Swedish film director, widely regarded as one of the great masters of modern cinema, has died at the age of 89. Fellow director Woody Allen described Bergman as "probably the greatest film artist ... since the invention of the motion picture camera."

The Swedish film director, widely regarded as one of the great masters of modern cinema, has died at the age of 89. Fellow director Woody Allen described Bergman as "probably the greatest film artist ... since the invention of the motion picture camera." 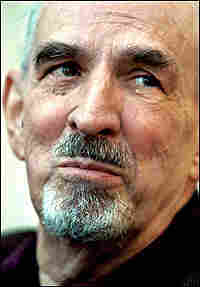 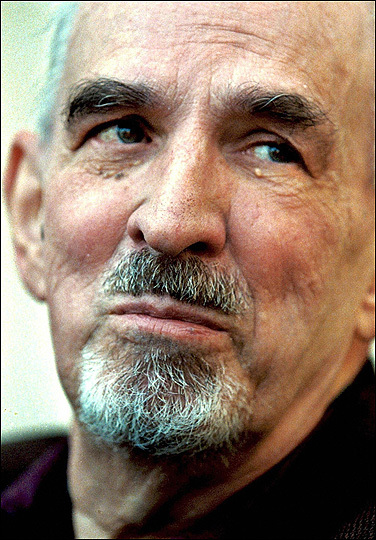 Ingmar Bergman, photographed in May 1998 in Stockholm.

Sixty years have passed, nothing has changed, it's still the same fever.

Ingmar Bergman in 1987, on his passion for filmmaking 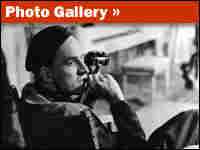 Bergman In Others' Eyes

Clues to a Life?

Bergman wrote the script for Bille August's The Best Intentions; it's the story of his own parents, and Bob Mondello says it's 'a clue to a life and a lifetime of brilliant work.'

Bille August on the Film

Human loneliness was one of Bergman's chief themes, as was a fascination with death — Death personified, sometimes, as in The Seventh Seal.

Fantasy and memory became one fabric in Bergman's films, perhaps most beautifully in Wild Strawberries. 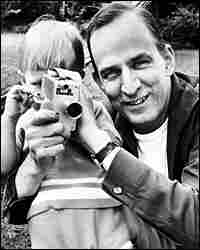 An undated photo from the 1960s shows Ingmar Bergman teaching his son Daniel how to handle a camera. Daniel later worked as a film and theater director. Lennart Nilsson/AFP/Getty Images hide caption 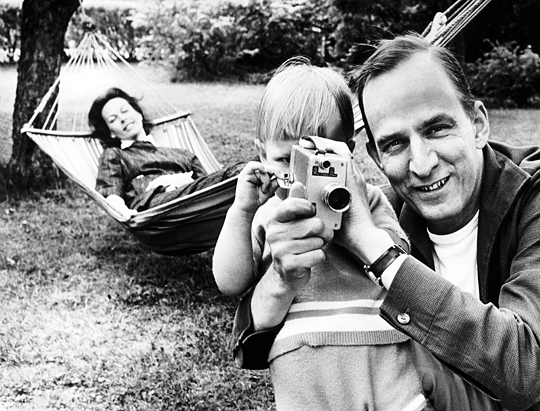 An undated photo from the 1960s shows Ingmar Bergman teaching his son Daniel how to handle a camera while Bergman's wife and mother of Daniel, Kibi Laretai watches.

The NPR News Blog: Learning From Bergman, at One Remove

At the beginning of Ingmar Bergman's 1957 film The Seventh Seal, the figure of Death stands on a rocky beach and presents himself to a knight just returned from the Crusades. Death is entirely cloaked and hooded in black, in stark contrast to his doughy white face. The image is still one of the most haunting pictures ever put on a movie screen.

Bergman, who died Monday at the age of 89, took on the biggest subjects — life, death, the existence and the silence of God.

"Ingmar Bergman was probably the nearest equivalent to a Shakespeare or a Rembrandt that the cinema has produced," said film historian and critic Peter Cowie, who is also Bergman's biographer.

"He uniquely was able to produce tragedies, comedies, historical works and chamber works which really delved deeply into the human condition. He really was able to get below the surface of the human mask."

Cowie said that like many great artists, Bergman also had a unifying theme in his work: humanity's need for metaphysical belief.

"It started as orthodox Lutheranism, in some of the films," Cowie said. "But over the years that changed to a much wider, nagging concern about man's place in the universe — why we're here, and if we're here, why aren't we better behaved with each other?"

Bergman often used events and images from his life, and his difficult childhood led him to look at how families malfunction. In a rare television interview with Dick Cavett in 1971, Bergman described a beautiful early childhood of making puppets and living in his imagination.

"Suddenly I didn't know if I had dreamt things, or if they existed," he said. "Sometimes life could be very strange, very hard and very cruel. And suddenly, you know, the parents came to me and said, in a very strange way, 'Why did you do that?' Or — and I didn't know why — or 'You have been lying.'

"That was most difficult thing. I didn't know I had been lying, because I mixed things."

One of the most beautiful examples of mixing dreams and reality comes in Bergman's Wild Strawberries, a film from 1957 that many consider his best. After a hard day of memories and self-evaluation, an aging doctor dreams of seeing his parents across a pond. The scene ends with a close-up of the doctor, played by the venerable Swedish filmmaker Victor Sjostrom. The outdoor light was perfect, but Sjostrom was angry about working overtime. Bergman was sure the shot would be a catastrophe, but it turned out to be his favorite close-up.

"We didn't rehearse — we didn't try it, you know, we didn't press it out," he said. "It was not created under pressure. It just came, suddenly. And that is, that face has so much about experience, about tenderness, about an old man's sadness for life's going away."

Bergman directed some of the greatest films ever made — Summer with Monica, The Virgin Spring, Persona, Cries and Whispers and Scenes from a Marriage were among his other titles. He directed his first film in 1945, and first gained international attention with 1955's Smiles of a Summer Night, a romantic comedy that inspired the Stephen Sondheim musical A Little Night Music.

And although he "officially" retired from theatrical filmmaking in 1984, he continued to make movies for television, to work in the theater — he was also a prominent stage director and the onetime head of Stockholm's Royal Dramatic Theater — and to write, until recently.

He was "probably the greatest film artist, all things considered, since the invention of the motion picture camera," director Woody Allen said in a 70th birthday tribute in 1988.

Devoted viewers agree that for the past six decades, Bergman's films have defined the possibilities of the art of film.