Accessibility links
Toyota Recall A Test Of Loyalty For Prius Lovers The famously liberal and environmentally conscious city of Santa Monica leads the country in sales of the Toyota Prius. But analysts say Toyota's recall of 437,000 Prius and other hybrid cars could push Californians toward other gas savers. 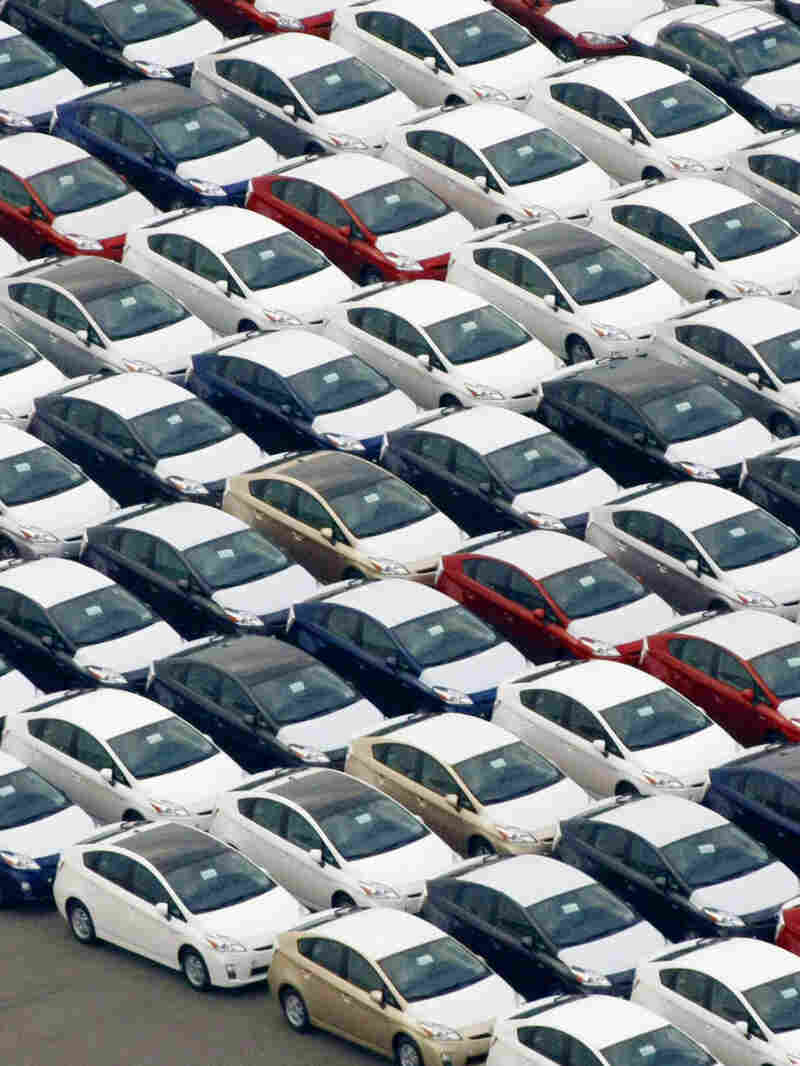 Toyota announced early Tuesday it would recall about 437,000 Prius and other hybrid vehicles to fix brake problems. AP hide caption

As Toyota crafts its message to the U.S. market in response to its recall of 437,000 Prius and other hybrid cars for faulty brakes, it should have Santa Monica, Calif., foremost in mind.

The famously liberal and environmentally conscious city leads the country in Prius sales.

Embraced By A Green Culture

Santa Monica made a point of being green at a time when other cities were just starting to think about it. The coastal community even has a taxi company that runs nothing but hybrids, most of them Toyotas.

"We have 14 Priuses, three Camrys — which are hybrids — and two flex-fuel vans which also run on alternative fuels," says Fuad Saneh, the general manager of Metro Taxi.

He says people in Santa Monica use his service specifically because it is eco-friendly.

According to Saneh, customers said: "When we saw you going on the street with the idea of Think Green, we wrote your number down. We used to call another company, but we love the design and the green idea."

He says Toyota's recent problems have done nothing to change his mind. Many others in the city that put the Prius on the map seem to agree.

Daniel Brondi, a retired French professor, stopped on Montana Avenue, a chic shopping district in Santa Monica, to enthuse about his Prius.

"I love everything. I love the car, the line, the way it drives. I like all the high-tech that I don't understand, but I love to use it — I'm still learning," Brondi says. "I love the back-up camera, my solar roof ..."

"I love the Prius," he says. "I can't think of a car that can get the same gas mileage. I drive a lot, so that's been a great option."

The 'Prius Coast Highway' No More?

The commuter mindset is another big reason California is the most Prius-studded state in the nation. Karl Brauer, the editor in chief of the car research site Edmunds.com, says he can relate — he does his own daily commute on the Pacific Coast Highway.

"I have a pretty long commute up and down PCH every day, and I've come to call it Prius Coast Highway," he says. "There are lots of Priuses in the area, to be sure."

I have confidence in Toyota. My God, for years and years, they've been fabulous. It's a little mistake, that's all.

Even so, Brauer says that glow of satisfaction has faded for some Toyota owners. Tuesday's Prius recall, he says, may separate the environmentally devoted from the gas-conscious.

"This is going to be a test of the loyalty, because I think most people who bought the Priuses, certainly early on, were so enamored of the philosophy of the car that nothing could have impacted their appreciation of the design and engineering of the car, which is impressive," he says.

Toyota's lag time in admitting the problem might hurt, though, he adds. And now that other companies are producing gas-efficient models — including hybrids — Brauer believes people who bought Priuses solely for the better mileage might go elsewhere.

"So there might be more risk for Toyota," he says. "Those buyers might consider other options if the reliability, the dependability or the safety issue is being raised."

Brondi says he has driven Toyotas for decades, and if his is one of the Priuses that is recalled, he'll just get it fixed.

"I have confidence in Toyota," he says. "My God, for years and years, they've been fabulous. It's a little mistake, that's all."

No doubt Toyota is hoping that is the typical response to Tuesday's recall news.