Accessibility links
In Anbar, A Familiar Face Again In Iraqi Politics: Saddam Hussein Ahead of national elections in March, residents of Anbar province say they're disillusioned with the current government and look back on the late Saddam Hussein with nostalgia. For all of his shortcomings, they say Saddam was a leader who inspired fear and respect. 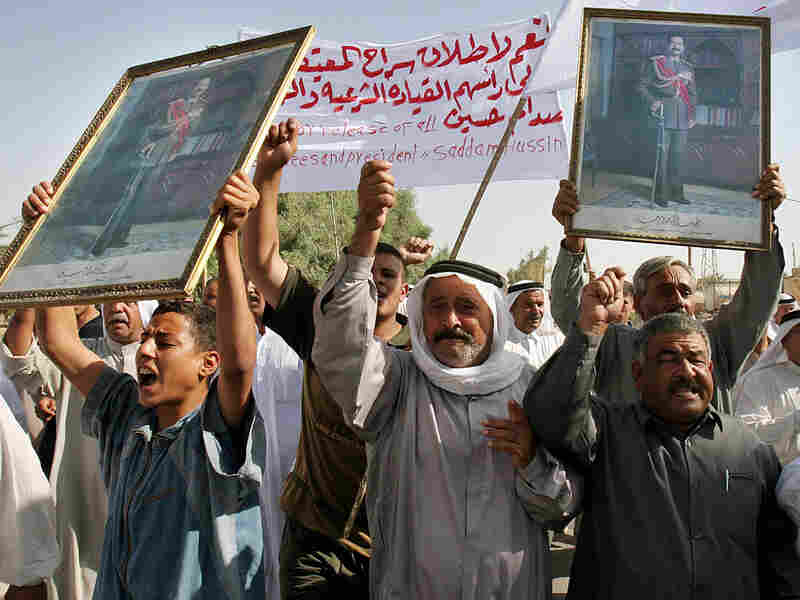 Iraqis holding pictures of Saddam Hussein march during a protest against the new constitution of Iraq near Ramadi in 2005. Bilal Hussein/AP hide caption 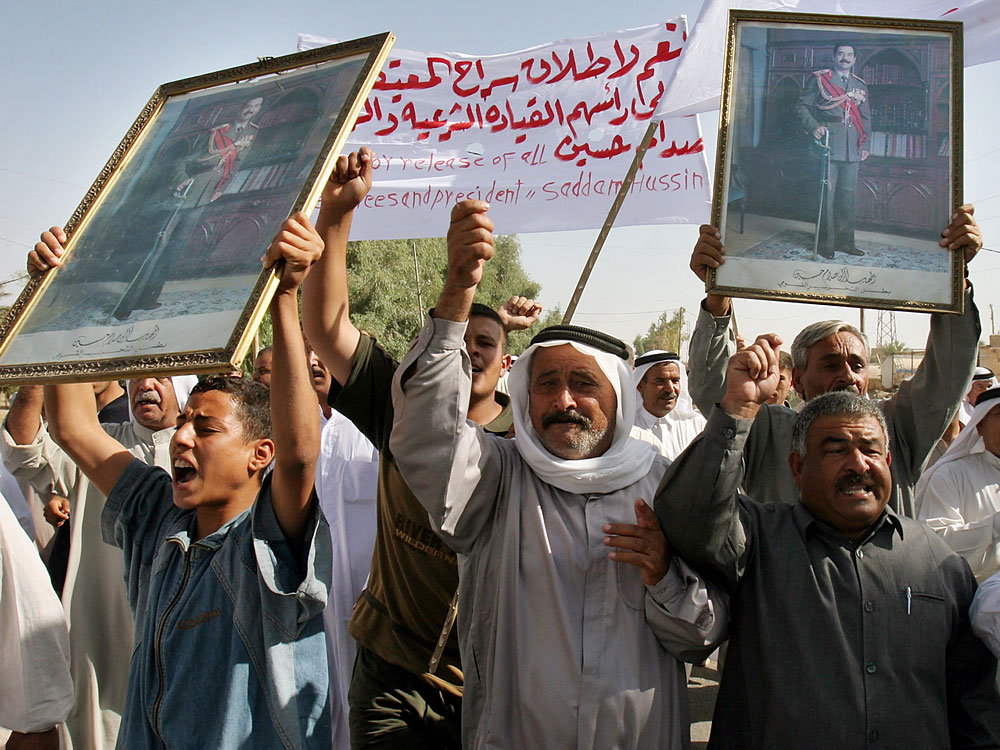 Iraqis holding pictures of Saddam Hussein march during a protest against the new constitution of Iraq near Ramadi in 2005.

A familiar face has re-emerged in Iraq's Anbar province ahead of parliamentary elections March 7. Though he won't be a candidate in the polls, Saddam Hussein is again a popular figure.

In the provincial capital Ramadi, the cult of Saddam is back in vogue.

His face, with its ink-black moustache, is blown up to the size of a wall in a mobile phone shop in Ramadi. Smaller pictures of Saddam hunting or making speeches are hung up behind the counter.

Shop worker Zaid plays a recording of Saddam saved on his cell phone. He says Saddam — who was executed in 2006 — is making a comeback.

It is only now that we have discovered how valuable Saddam was to us. People have compared the situation before to the situation now. And then was better.

a shop worker in Ramadi

"Many people are putting up his picture and keep videos of him on their mobile phones and praise him and talk about him," Zaid says.

The reason, residents say, is disillusionment with the current Shiite-led government and the local Sunni provincial council. Anbar suffered years of brutal war that pitted U.S. forces against al-Qaida and other insurgents. Now, it's less violent. But people like Zaid say life is still hard, with few services and no jobs.

"It is only now that we have discovered how valuable Saddam was to us," Zaid says. "People have compared the situation before to the situation now. And then was better."

Since the Americans have pulled out, Zaid says, people have become bolder in displaying Saddam's image.

"We couldn't put the picture up before because of the Americans," Zaid says. "If they passed by and saw a picture of Saddam, they would arrest us, suspecting us of being insurgents."

While for many Iraqis, Saddam and his Sunni-dominated Baath party inspired loathing, Anbar produced many of the officers in Saddam's army and senior members of his toppled regime.

At a nearby barbershop, 35-year-old Hameed Salim says that has left a sense of nostalgia for the Saddam era.

Frankly speaking, there are people who are suspicious that fraud will take place in the elections, and we say to them, 'you are right.'

Saddam, for all his faults, was a leader who inspired fear and respect, many residents told NPR.

Salim, like many here, says he won't vote in the upcoming elections.

Sunnis largely boycotted the 2005 elections. Last year, in a provincial poll, Anbar still ranked lowest in terms of voter participation, with only around 40 percent of people going to vote amid charges of fraud.

At a recent meeting in Anbar, Khalid Muhammad Rajab from the Independent High Electoral Commission sought to convince the gathered crowd that elections this time will be free and fair.

"In these elections, everybody knows that they must be impartial, and we want to make sure that all the people of Anbar participate," Rajab said.

A member of the audience, Sheik Ammash al-Ubeidi, stood up to express his skepticism: "Frankly speaking, there are people who are suspicious that fraud will take place in the elections, and we say to them, 'You are right.' "

Residents of Anbar don't have to travel far to see the promises of the electoral commission ring hollow.

At a checkpoint on Anbar's main highway, Iraqi soldiers recently were handing out calendars emblazoned with a picture of Iraq's Shiite Prime Minister Nouri al-Maliki.

One soldier said he was ordered to distribute them by his commander.

Another soldier smiled and pressed more fliers through the window of the car, saying, "This is Maliki. May God preserve him for you."

At the mobile phone shop in Ramadi, owner Abu Mohammed says at least when Saddam was in power, people knew what to expect.

He says today Iraqis hear promises from politicians to make changes and to rebuild. But the next morning, he says, Iraqis wake up to the same situation or even worse.