Accessibility links
Beating Charges Split La. Town Along Racial Lines Six black high school students could face decades in prison if found guilty in the beating of a white student in a dispute over a "whites only" tree. Their supporters say the charges are disproportionate to the crime and charge prosecutors with racism. 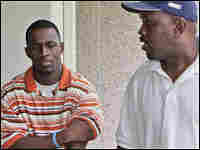 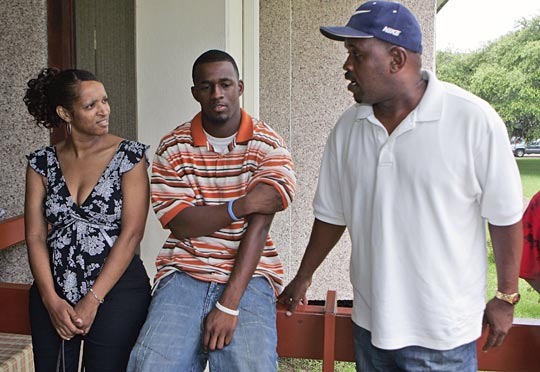 Carwin Jones, (center), talks to his father, John Jenkins, outside the LaSalle Parish Courthouse in Jena, La. Jones is one of five black students still facing attempted second-degree murder charges for beating Justin Barker, who is white, last December. Tina Jones, left, is the mother of Bryant Purvis, another student charged. A sixth black student has already been convicted on lesser charges.

As at hundreds of other high schools across America, black and white students at Jena High School in Jena, La., rarely sit together. The white students gather under a big shade tree in the courtyard, while black students congregate near the auditorium.

But last year, a few days into the first semester, a new student, a freshman African American, asked the principal at an assembly, if he, too, could sit under the tree. He was told he could sit anywhere he liked.

Three white boys on the rodeo team apparently disagreed. The next morning, there were three nooses hanging from the shade tree in the courtyard.

Anthony Jackson is one of two black teachers at Jena High School. He laughs ruefully, as he recalls watching the nooses swaying in the tree.

"I jokingly said to another teacher, 'One's for you, one's for me. Who's the other one for?'"

Many in Jena's black community wanted the three white students expelled. But when the white superintendent and other school administrators investigated, they decided the nooses were a prank. Instead of expulsion or arrest, the three received in-school suspension.

"White students can do things and receive a slap on the hand," Jackson says. But authorities "want to throw the book at blacks," he adds.

A few of the black athletes, the stars of the football team, took the lead in resisting. The day after the nooses were hung, they reportedly organized a silent protest under the tree.

The school called an assembly and summoned the police and the district attorney. Black students sat on one side, whites on the other. District Attorney Reed Walters warned the students he could be their friend or their worst enemy. He lifted his fountain pen and said, "With one stroke of my pen, I can make your life disappear."

That evening, black students told their parents that the DA was looking right at them. Walters denies that. Billy Fowler, a member of the school board, doesn't believe it, either.

"He said some pretty strong things," says Fowler, "but I don't think he was directing it to anyone in particular. I think he just wanted people to calm it down."

But things didn't calm down. Some whites felt triumphant; some blacks were resentful. Fights began to break out at the high school. But that year, the football team was having an unusually good season and the black athletes were a major reason why. So while there were fights throughout the fall, nobody wanted to take any action that would hurt the team.

When the season was over, so was the truce. On Nov. 30, somebody burned down Jena High. Whites thought blacks were responsible, blacks thought the opposite.

The next night, 16-year-old Robert Bailey and a few black friends tried to enter a party attended mostly by whites. When Bailey got inside, he was attacked and beaten. The next day, tensions escalated at a local convenience store. Bailey exchanged words with a white student who had been at the party. The white boy ran back to his truck and pulled out a pistol grip shotgun. Bailey ran after him and wrestled him for the gun.

After some scuffling, Bailey and his friends took the gun away and brought it home. Bailey was eventually charged with theft of a firearm, second-degree robbery and disturbing the peace. The white student who pulled the weapon was not charged at all.

The following Monday, Dec.4, a white student named Justin Barker was loudly bragging to friends in the school hallway that Robert Bailey had been whipped by a white man on Friday night. When Barker walked into the courtyard, he was attacked by a group of black students. The first punch knocked Barker out and he was kicked several times in the head. But the injuries turned out to be superficial. Barker was examined by doctors and released; he went out to a social function later that evening.

Six black students were arrested and charged with aggravated assault. But District Attorney Reed Walters increased the charges to attempted second-degree murder. That provoked a storm of black outrage.

"Jena has always been a racist town," says Bailey's mother, Caseptla Bailey. "We've understood that....It has been that way since I've lived here."

As far as racial problems, our community is no different than any other community," Fowler says.

Fowler is one of the few leaders with the school administration or local law enforcement willing to talk to the media. The principal, the school superintendent and the district attorney all declined repeated calls for comment.

Fowler says he is appalled at reports by outside media outlets that he claims portray Jena as a racist community. But he and many other white leaders agree that the charges are unfair.

"I think it's safe to say some punishment has not been passed out fairly and evenly," Fowler says. "I think probably blacks may have gotten a little tougher discipline through the years.

"Our town is not a bunch of bigots. They're Christian, law-abiding citizens that wouldn't mistreat anybody."

But the black students and their families feel mistreated. The first to go to court was Mychal Bell, the team's star running and defensive back. Bell's court-appointed lawyer refused to mount any defense at all, instead resting his case immediately after two days of government presentation. An all-white jury found Bell guilty.

A talented athlete, Bell had a real shot at a Division I football scholarship. He now faces up to 22 years in prison. The other five black students await trial on attempted murder charges.

Over the weekend, Jena High School had the big shade tree in the courtyard chopped into firewood.