Accessibility links
Sudden Love: A Very Improbable Gorilla Valentine : Krulwich Wonders... Part of the art of being a field scientist in Africa is to make the animals think you're not watching them. So Barb Smuts had to learn to make herself very dull, and to never look a gorilla in the eye. Then one day, the strangest thing happened.

Hear Why Barb Smut's Glasses Got All Steamy

Hear Why Barb Smut's Glasses Got All Steamy 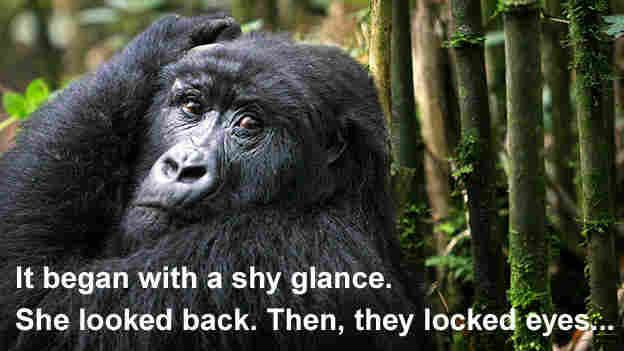 It began with a shy glance. She looked. They locked eyes.

She was a gorilla. Barb was a human. And between them, the strangest thing happened.

This story is best told first person, as it unfolded, in conversation. So here's the script of my conversation with animal behaviorist Barbara Smuts. You can listen to it by pushing the button up above, or you can just follow along:

Barbara Smuts: Hi, this is Barb!

Robert Krulwich: Hi Barb. Barbara Smuts is now a psychology professor at the University of Michigan, but years ago, she was a field biologist in Africa where she studied chimps and baboons. And to do that she had to learn to make herself uninteresting to the animals around her so they'd go about their business.

Robert: So she practiced being dull ...

Robert, giggling: So she never looked an animal in the eye, or ...

Barb: Yeah, you don't give anybody a hard stare. And if you are looking at someone and they look at you, don't continue to look at them. You turn your head away.

Robert: All of which made it very interesting one time when she was up in the mountains of Rwanda, visiting a wild gorilla preserve with her friend Dian Fossey. And she was led to a group of female gorillas -- wild gorillas sitting together in a patch of forest. So she carefully approached.

Barb: You walk and move as gently as possible.

Robert: So keeping a safe distance, she sat down to watch.

Barb, laughing: Well I caught the eye of this young adult female who was sitting across from me. It was kinda almost like a circle, and she was on the other side, maybe 12 feet away. So we, umm, locked eyes for a few seconds. She kept looking at me, and I kept looking at her and, uh, I was, inside, inside I was making this enormous effort to beam her way my feelings about her which were entirely positive.

Robert: Cause you kind of liked her from a distance, yeah?

Barb: I did. I did. I loved her from a distance.

Robert: Why? Because she was such a big animal and you were ...

Barb: Uh, well, they're beautiful animals, mountain gorillas, and she had a sweet expression on her face, and I just thought she was terrific. [laughing] And she'd been looking at me.

Robert: This is so eighth grade. So then what happens?

Barb, laughing: She got up and she walked over to me. I was sitting on the ground. She stood right in front of me, and, uh, she pressed her forehead up against mine. I remember this very clearly because I was wearing glasses and they got all steamed up from her ... her breath. And then she wrapped her arms around me. And she held me for a moment. Just a few seconds. And then she let go, and she sat down. And I felt like, gee I must be OK. I'm not a bad person.

Barb: Oh I just felt so lucky. And honored. And thrilled. And I asked Dian Fossey later, I said "Is she in the habit, does she go around hugging, um, women?" And she said, "No, that's not something she does." So ....

Robert: So to this day, Barb has no idea what happened, why she was chosen, why it felt so right, so strangely welcome. Barb is a scientist, yes, but in this situation there was nothing to measure, there was no data, no pattern, no history, just a sudden rush of feeling and then it was over.

Barb: Things happen when you, when you spend time in wild places and you tune into the animals. Things ... things happen that you can't explain.