Accessibility links
East Coast Digs Out From Record Snow The beleaguered mid-Atlantic will now resume digging out after logging 3 feet of snow in a week. The second major storm within days roared through the region Wednesday, leaving a fresh blanket from Washington to New York. 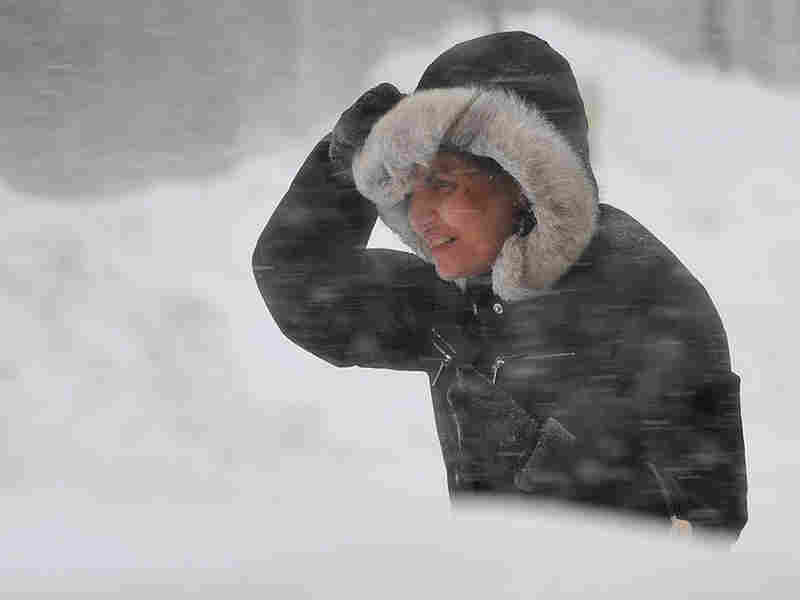 A woman struggles through a blizzard in Washington, D.C. A second major snowstorm struck the eastern U.S., paralyzing travel for millions, shutting down the U.S. capital, and forcing school closures from Virginia to New York. Mandel Ngan/AFP/Getty Images hide caption 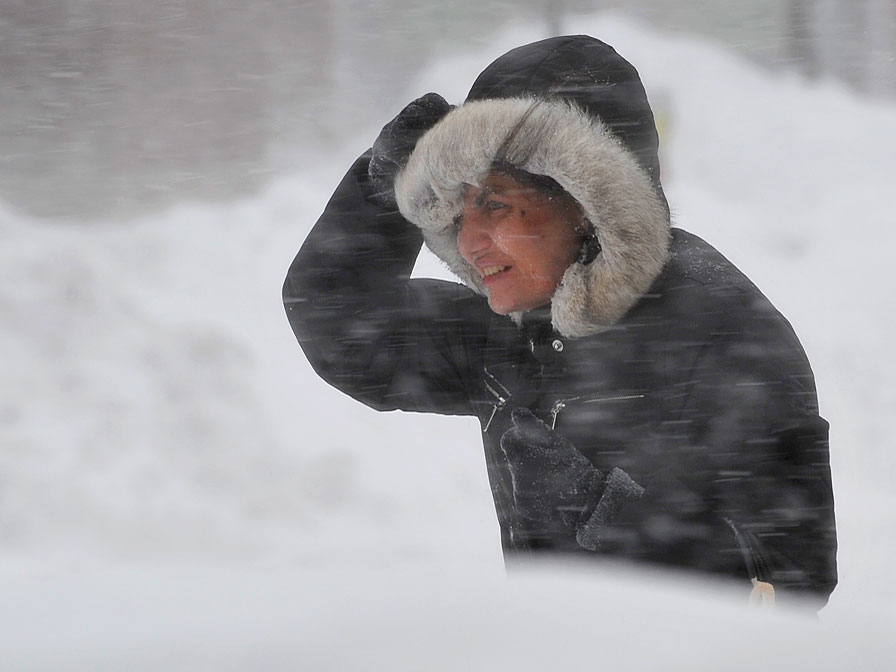 A woman struggles through a blizzard in Washington, D.C. A second major snowstorm struck the eastern U.S., paralyzing travel for millions, shutting down the U.S. capital, and forcing school closures from Virginia to New York.

More than a month remains in winter but already Washington D.C., Philadelphia and Baltimore logged their snowiest winters in history.

The second of back-to-back snow storms smothered the East Coast and easily eclipsed record seasonal snow totals. Most of the effects of the second storm had tapered off by Thursday.

In Washington, D.C., the federal government planned to be closed for a fourth straight day, while city agencies and schools in the hardest-hit regions also scored snow days.

The National Weather Service issued blizzard warnings in cities from Washington, D.C., to New York. It predicted that as much as 16 inches of snow could fall in New York City, and that Philadelphia could get nearly 2 feet as the storm makes its way up the Atlantic coast. As conditions rapidly deteriorated, local officials in some areas pulled snowplows off the roads because of whiteout conditions and gale-force winds.

Several days of clearer weather are expected in the mid-Atlantic, but forecasters are already warning of possible snow showers returning by Monday.

It's hard to find anything in the history books of these types of storms back to back.

Sales of shovels, groceries and booze mounted with the snows, but for airlines and department stores, the region's wintry weather meant millions of dollars of lost revenue.

Airports were closed from Washington to New York City, a further blow to an industry that has been forced to cancel thousands of flights in the past week.

Travelers were stopped in their tracks at airports far outside the snow zone. But the major airlines said it was too early to put a dollar figure on the storms' impact, in part because carriers typically reduce the number of available flights anyway in February.

Robert Herbst, an aviation consultant, said many customers will ask for credits toward future travel instead of refunds, which should also work in the airlines' favor.

Travel on the ground wasn't any easier. Amtrak announced it was limiting service along its Northeast Corridor.

Pileups involving 50 or more vehicles were reported on I-64 near Williamsburg, Va., and in western Pennsylvania's Clearfield County. The crash in Pennsylvania left one motorist dead.

For shopping malls and department stores, the loss of revenue may be permanent.

Dan Hess, CEO of research firm Merchant Forecast, said a snowstorm of this magnitude can knock down sales by 10 to 25 percent for the week. When it happens in the slow months of January and February, "you don't make that business back up," he said.

Records Fall With The Snow

The previous records for snowiest winters were 62.5 inches in Baltimore in 1995-96, and 54.4 inches in Washington in 1898-99. As of Wednesday afternoon, Baltimore had 72.3 inches so far this winter and Reagan National Airport on the D.C./Virginia border had 54.9.

The National Weather Service said 12.6 inches of snow fell in parts of the Chicago area Tuesday. That total shatters the daily snowfall record for February. The last record was 8.9 inches on Feb. 9, 1885.

In Philadelphia, Wednesday's snowfall had pushed the city past its previous winter snowfall record of 65.5 inches by early afternoon. "It's incredible," NWS meteorologist Tony Gigi told the Philadelphia Inquirer. "I never would have thought I would see another '95-96. This is going to leave '95-96 in the dust — I mean, in the drifts."

The blizzard shut down the city's schools, businesses, roads and public transit.

Citing low visibility, among other conditions, Pennsylvania Gov. Ed Rendell closed major highways across the state and three interstates within Philadelphia, leaving the city of 1.5 million people with one driving choice: I-95.

Public transit officials halted all bus service across the city and rail lines were delayed.

Downed trees and power lines cut electricity to thousands of people, and officials said the extreme conditions could delay efforts to restore power.

Schools throughout the city and suburbs were canceled through Thursday.

Much of New York City seemed like a ghost town early Wednesday, but the financial district continued to buzz with activity. The New York Stock Exchange remained open, and workers trudged through snow and slush on Wall Street.

Alex Rosenthal, a broker at 44 Wall Street, said he waited 45 minutes for a subway in from Brooklyn, only to find that many of his colleagues didn't make it at all. "The people that live in Brooklyn, they had to come in. Long Island and Jersey, they stayed home today. Hopefully, the boss will let us out early," he said.

New York's commuter trains warned that they might have to shut down in the afternoon, and the city's 1.1 million schoolchildren had a rare snow day — only the third in six years.

Baltimore officials banned all nonemergency traffic, and Maryland Gov. Martin O'Malley appealed to drivers to stay off the road as visibility neared zero in many areas.

"Stay at home for the duration" of the snowstorm, O'Malley said at a news conference. "We're experiencing blizzard conditions in every county in every part of Maryland."

O'Malley said there is growing concern that roofs may collapse under the weight of so much snow. The venerable Smithsonian Institution reported that part of the roof and a wall at a support center in Suitland, Md., had collapsed.

"It's hard to find anything in the history books of these types of storms back to back," said National Weather Service meteorologist Stephen Konarik.

Thousands of workers along the East Coast were scrambling to plow and salt roads. Plows and salt spreaders fought heavy snow in Pennsylvania and New Jersey, where the flakes briefly turned to rain to make a slushy mix. Maryland officials said salt supplies used by road crews were dwindling in some parts of the state. A spokesman for Pennsylvania's Department of Transportation said drivers' shifts were running as long as 16 hours.

"It can be exhausting, mentally and physically," said Jerry Graham, a state plow truck driver in Pennsylvania's Lehigh County.

Thousands of residents remained without power from the last storm in parts of western Pennsylvania, Maryland and other areas. Utilities said deep snow was hindering some crews trying to fix damaged power lines even before Tuesday's storm arrived.

D.C. Mayor Adrian Fenty said his city has spent millions on snow removal, and he has asked the federal government to help pay the mounting costs.

In Washington, officials were tallying up the cost of the double-barreled snowstorms after the federal government shut down yet again. About 230,000 federal workers in Washington have been off since Friday afternoon, when the first storm began.

Norton said the city does not have a state government's financial reserves to fall back on in an emergency.

The U.S. House announced it is scrapping the rest of its workweek. Several hearings and meetings in Congress and federal agencies were postponed, including one planned to address Toyota's massive recalls.

Officials estimate that the cost to U.S. taxpayers is around $100 million a day in lost productivity. But the effects of the federal government's closure are negligible because about 85 percent of federal employees work outside the Washington region. An IRS spokeswoman said tax returns should not be affected.

From NPR's Deborah Tedford, Richard Gonzales and Robert Smith, with contributions from Susan Phillips and Peter Crimmins of WHYY and material from The Associated Press