Accessibility links
Verdi's 'La Traviata:' The Original 'Pretty Woman' Like the Julia Roberts movie Pretty Woman, Verdi's La Traviata tells the tale of a good-hearted call-girl who meets Mr. Right, only to give him up in the end.

From Théâtre Antique In Orange, France 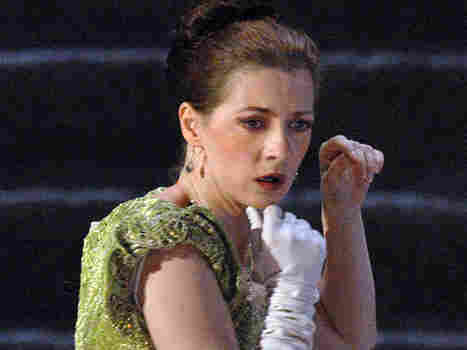 If you spend any time at all reading about opera, you've probably seen comparisons between operas and movies — and those comparisons are easy to make, as the two genres share any number of common traits.

In 18th- and 19th-century Europe, operas were a popular form of large-scale, mass-market entertainment. They featured compelling drama, dazzling effects, stirring music and superstar performers — just like movies do today. And the adulation showered on today's Hollywood stars has been enjoyed by great opera singers for centuries.

So it's not surprising that we often see operas in the movies. Remember Cher attending La Boheme in Moonstruck? Or Richard Gere taking Julia Roberts to La Traviata in Pretty Woman?

Sometimes, when operas show up in the movies, it's simply because their music seems to enhance the films. But in the examples just mentioned, there's more to it than that. In Moonstruck, the two main characters are lovers who seem just about perfect for each other — except when they're not. Much the same could be said of the lovers in La Boheme.

In Pretty Woman, Vivian — the Julia Roberts character — goes to the opera for the very first time. Even so, La Traviata moves her to tears. And that's hardly surprising, as Vivian has more than a little in common with opera's tragic, main character — not least, her occupation.

The character of Vivan in the film is an old, Hollywood staple — the "hooker with a heart of gold." Verdi's La Traviata is the story of Violetta Valery, a glamorous Parisian courtesan. Both Violeta and Vivian meet up with just the right guy — and they both have to think seriously about the difference between their place in polite society, and that of their new paramours.

Vivian, in true Hollywood style, is swept away by her new lover, amidst the promise of a brand new life of luxury and bliss. And if Verdi had lived, say, in the Baroque era, when operas nearly always had happy endings, Violetta might have done just as well for herself.

But in Verdi's day, fiery romances at the opera often didn't turn out so well. The heartbreak of La Traviata has been drawing tears from it's audiences for more than a 150 years — and not just in the movies.

On World of Opera, host Lisa Simeone presents La Traviata in a production from the Théâtre Antique in Orange, France. The stars are soprano Patrizia Ciofi as Violetta and tenor Vittorio Grigolo as Alfredo, with conductor Myung-Whun Chung.

The Story of 'La Traviata' 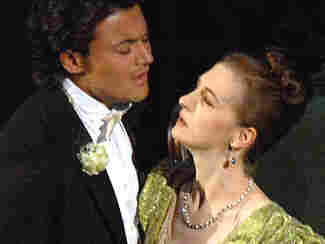 ACT ONE: The action begins at a party in Violetta Valery's Paris home. The setting and music are lavish, but the action is simple. Violetta is introduced to a young man named Alfredo Germont. He's been watching her from afar, and he's fallen madly in love with her.

When the rest of the guests go off to dance, Violetta stays behind. Alfredo approaches her, and declares his love. The young man seems quite sincere in his feelings, unlike Violetta's current protector, the Baron Douphol. But Violetta enjoys her present lifestyle — unlimited pleasure with no commitment. She's not ready to give it all up just for love, and says so in her brilliant aria "Sempre libera." Alfredo is disappointed and leaves, but he hasn't given up hope. After he's gone, Violetta hears him singing under her balcony.

ACT TWO: It's two months later, and things have changed. Violetta did give up her licentious ways for Alfredo, and the two are now living together in a small country house outside Paris. They're definitely not enjoying the sort of the lavish life Violetta led as a courtesan in Paris. Without a wealthy benefactor, she has sold many of her possessions just to pay the rent. When Alfredo discovers this he's humiliated by his inability to support her, and he leaves for Paris to raise some money.

Once he has gone, Violetta's maid announces an unexpected guest. It's Giorgio Germont, Alfredo's father. He appeals to Violetta to leave Alfredo. Germont says his son's involvement with a courtesan has been bad for his family's reputation — even his young daughter's marriage is in jeopardy.

The scene is one of Verdi's finest. At first, the music emphasizes Germont's coldness, the cruel superiority of his attitude and Violetta's indignant response. Why would a woman with Violetta's strength and independence even consider his request? Yet, as Germont's admiration for Violetta increases, his arguments soften.

Finally, Germont's appeal is given in music so pure and moving that somehow, Violetta's ultimate resignation rings true. She agrees to leave Alfredo, despite the happiness they've shared. When Alfredo returns from Paris, Violetta can barely face him. Alone, she writes him a letter, gives it to her servant Giuseppe to deliver to Alfredo, and leaves for the city.

When Alfredo finds her gone he falls into his father's arms, heartbroken. Germont comforts him with one of Verdi's greatest baritone arias, "Di Provenza il mar." Then, when Alfredo discovers a note from Flora, inviting Violetta to a party in Paris, he assumes that she's left him to go back to the high life. Heartbroken and furious, Alfredo defies his father and rushes off to find her.

The next scene takes place at Flora's party. Alfredo is there, and so is Violetta. She's gone back to Baron Douphol. Alfredo has had too much to drink, and confronts Violetta. He takes the money he's won gambling and throws it at her feet, calling it "payment for her services." Violetta, who still loves him, collapses in humiliation and grief. As the act ends, Alfredo's father arrives and condemns his son's crass behavior. Alfredo is remorseful, but the damage is done.

ACT THREE: A month has passed, and Violetta is gravely ill with consumption. She's lying in bed attended by her maid, Annina. A doctor has been called but as he leaves, he tells Annina that Violetta could die at any time. They keep this news from Violetta, but she senses the truth.

Recently, she received a letter from Germont, and now she reads it aloud. It says that Alfredo wounded Baron Douphol in a duel over Violetta, and was forced to leave the country. Since then, Alfredo has been told about Violetta's illness and is hurrying to return. Now, it seems, he won't make it in time. There's a religious celebration outside, beyond the closed shutters — but inside there's little light, and little hope.

In Violetta's final moments, Alfredo returns. They remember their brief happiness in the country, and for a moment Violetta seems to gain strength. She tries to get up, but it's too much for her. She urges Alfredo to find another, more innocent lover. As Alfredo weeps at her side, Violetta dies.