Accessibility links
Iraqi Factory Struggles to Survive in a Free Market The Iskandariyah bus factory was Saddam's pride and joy, at one time employing thousands, but as the open market drains away its once guaranteed business, the factory has been forced to remake itself.

Listen
Iraqi Factory Struggles to Survive in a Free Market 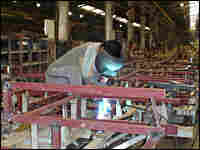 A welder works on a bus at the factory in Iskandariyah. The factory once employed more than 3,000 people, but now has fewer than 500 on its payroll. Major Craig Whiteside hide caption 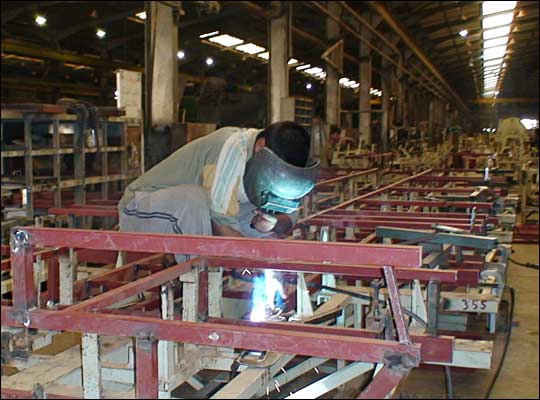 A welder works on a bus at the factory in Iskandariyah. The factory once employed more than 3,000 people, but now has fewer than 500 on its payroll. 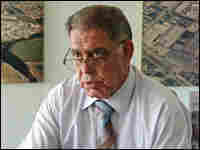 Sheik Sabah al-Khafaji has pushed the factory to diversify its capabilities to maintain competitiveness in the open market. Major Craig Whiteside hide caption 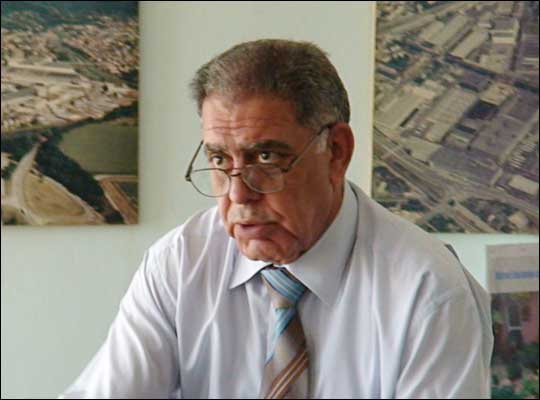 Sheik Sabah al-Khafaji has pushed the factory to diversify its capabilities to maintain competitiveness in the open market.

Iraq's state-owned factories were once the backbone of the country's economy, but after nearly four years of war, most remain shuttered.

The State Company for Automotive Industry, which manufactures buses, is one of the few survivors.

Located 30 miles south of Baghdad in the town of Iskandariyah, the factory produced six to 10 buses a day during boom times in the 1980s. Now, they manufacture just six to 10 a month.

"Because they import buses and they don't buy from our factory. The ministries and the open market and they can do what they want," explains Sheik Sabah al-Khafaji, who runs the factory.

To survive, the bus factory has diversified. Workers now build towers for refineries and fabricate steel to repair blown bridges. Under a $6 million contract with the U.S. government, they also assemble modular buildings and armor big, yellow buses, built on Swedish chassis. Sabah has also just signed a contract to maintain transport trucks from Kuwait.

But the bus factory is an exception. After the regime change four years ago, the highly centralized Baathist government that placed orders for cigarettes, bicycles, detergent, milk and tomato paste collapsed. Then the factories' cash balances were depleted to pay for reconstruction.

Today, according to the U.S. military, four out of the nearly 200 state-owned companies have reopened albeit at lower production — a clothing factory in Najaf, a porcelain sink plant in Ramadi, a leather facility in Baghdad and the bus factory.

Currently, the bus factory employs about 450 people. The other 3,000 workers from the Saddam years have been furloughed, collecting 40 percent of their salaries — which Sabah says is not enough to keep them from joining the insurgency.

With unemployment in Iraq thought to be 60 percent, the Pentagon is eager to occupy an idle work force and keep them from attacking U.S. troops.

As the first Deputy Undersecretary of Defense for Business Transformation, Paul Brinkley, a former hi-tech executive, has been tasked with reinvigorating Iraqi industry.

"That's a factory I can bring businessmen to. They see a skilled work force. They see a people who can manufacture buses and tractors and irrigation equipment and all the things they can do in Iskandariyah, and suddenly they're interested in potentially taking advantage of this work force to access this market," Brinkley says. "That's the philosophy we're applying. Now it's difficult."

Still, the bus factory struggles to stay above the country's deepening political crisis.

What they need most, workers say, is new equipment. Ali Oweid Fayel, a 28-year-old welder, stands near his torch, in a dirty denim shirt and sandals.

"We are using antiquated, outdated machinery in this factory. We still use an old hand welder. We don't have anything innovative," he says.

For workers living in nearby Iskandariyah, a violent town right on the Sunni-Shia fault line, earning a living can be a dangerous business.

"Every day we risk our lives when we come to work. We could expect a suicide bomber to blow us up at any time," Fayel adds.

The bigger question for the bus factory, and every other state-owned factory, according to Major Craig Whiteside, industrial liaison at the nearby U.S. military base, is whether in post-Baathist Iraq the plants will privatize or perish.

"At what point do they make a break from the Socialist underpinnings of their factories and their business models and say we're going for it? Otherwise they'll die off because they cannot compete with free market that's out there," Whiteside says.