Accessibility links
Movie Review - 'Valentine's Day' - This One's For The Lovers (And The Haters) Director Garry Marshall, he of Pretty Woman and The Princess Diaries, is back with a big, fluffy holiday film about relationships, breakups and female vengeance. But critic Ella Taylor says this Valentine's Day is surprising — and more sincere than you might expect.

A 'Valentine's Day' For Lovers — And For Haters

A 'Valentine's Day' For Lovers — And For Haters 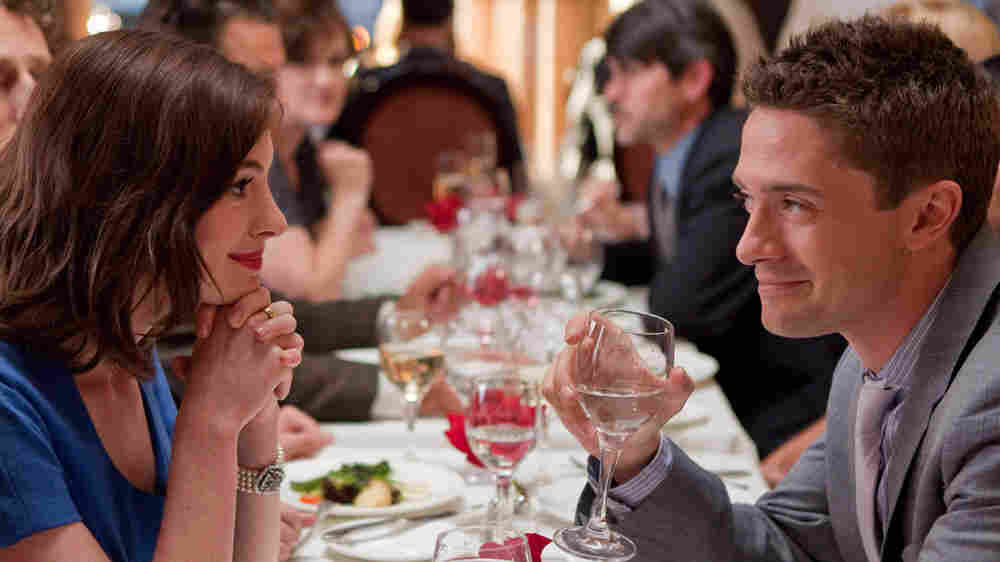 Love At First Bite? Valentine's Day follows a group of Angelenos — including a receptionist (Anne Hathaway) and the new flame (Topher Grace) who doesn't know she works a phone-sex line by night — through one fateful Feb. 14. Warner Bros. Pictures hide caption

'Is There A One-Course?'

'Why Do You Hate Heart-Shaped Candy?'

One day 20 years ago, I was on the phone ranting at an editor at a now-defunct women's magazine for the seasoned demographic. She had assigned me a think piece on Garry Marshall's Pretty Woman.

"What's to think?" I snapped. "The movie has nothing to propose except that the answer to all of life's problems is shopping." There was a pause, then a stage sigh, then I swear I heard a wicked grin taking shape.

Whether the soaring box office of Pretty Woman, which now celebrates its anniversary with a modest re-release, did in fact draw its power from American shopaholism we'll never know. But it certainly made a brand out of Julia Roberts' smile, and in the interim Marshall has become one of Hollywood's cheeriest boosters of the culture of capitalism.

With his impressive output of really terrible movies (Beaches, Runaway Bride, Georgia Rule come to mind) and a couple of surprisingly good ones (Frankie and Johnny, The Princess Diaries), Marshall is dependable enough at putting bums in seats that he can pretty much do as he pleases. And what pleases him is pleasing us girls — all of us. And so Marshall has packed his endless but genial new popcorn comedy, Valentine's Day, with ladies of every marketable (and to his credit not-so-marketable) age group, thrown them a few hapless hunks to rehabilitate, and tied up all of their troubles in a shiny, pink bow — all just in time for that special day we love to hate.

I wouldn't presume to call Marshall a feminist, but he likes his pretty women, from the teen idol Taylor Swift to Emma Roberts as a hyper-responsible teen planning her first sexual encounter to her fab Aunt Julia (a soldier on leave of absence to visit her man) to Shirley MacLaine, flirting with her husband (Hector Elizondo) and her own earlier screen self at the Hollywood Bowl. For dessert, Marshall puts some of the biggest names from the 30-something A-list on parade — Jessica Biel and Jessica Alba as hardcore career women, Anne Hathaway as a receptionist who moonlights as a phone-sex worker, Jennifer Garner as a teacher who loves too much. All that's missing is Penelope Cruz as a sex-starved nun. And naturally everyone is lovelorn and primed to have their dots connected with the fewest possible degrees of separation. 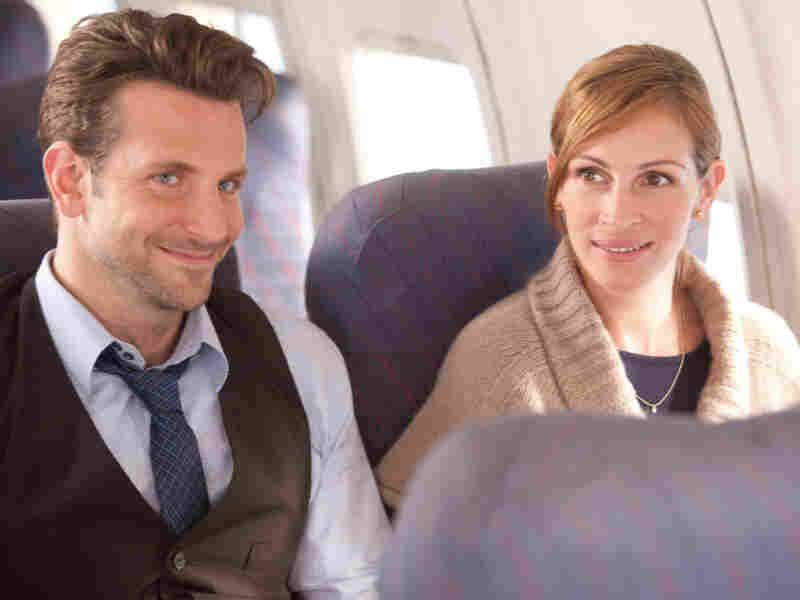 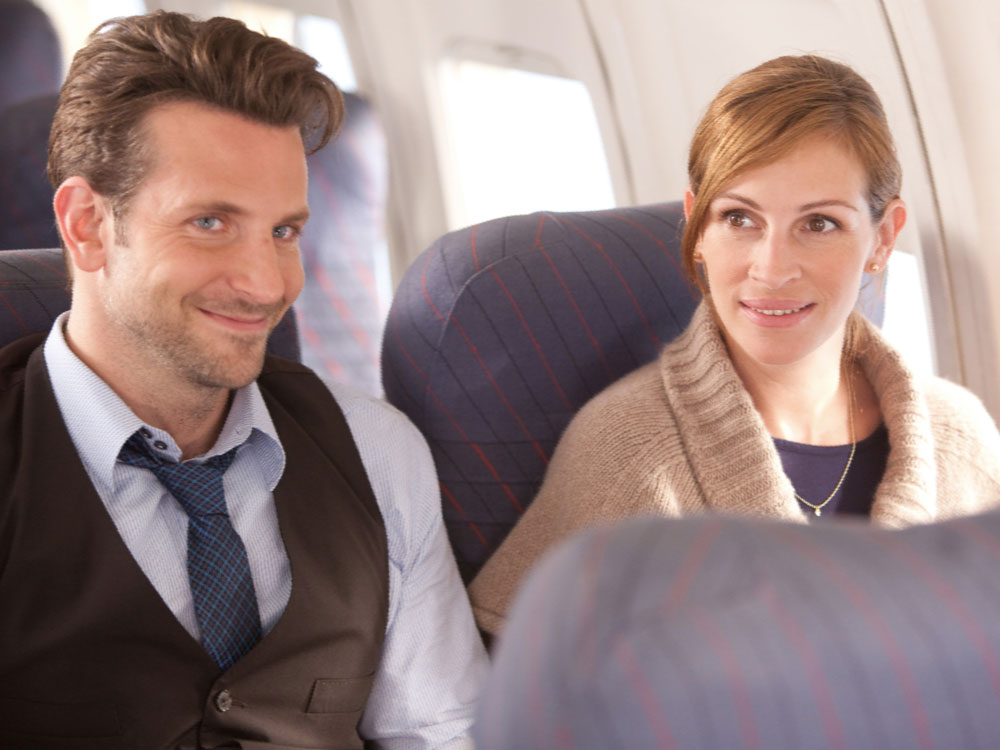 Soldiering On: On leave of absence to see her man, Capt. Kate Hazeltine (Julia Roberts) meets a newly single stranger (Bradley Cooper) on her flight to Los Angeles.

Marshall directs as if he's putting together dinner from whatever's in the fridge. He drags us around the usual L.A. tourist spots — a pinch of Venice here, a slice of downtown there (with comedian George Lopez doing the proletarian honors), then back to the swank Beverly Wilshire. He splashes gobs of pink and red on the production design, plonks an unabashedly literal score ("Amor") on the soundtrack and loses no opportunity to wedge in whatever gag line — "You know what Moorpark spells backward?" — has crossed his mind lately.

And still I come to defend this indefensible movie, retro values and all. If Marshall is an unrepentant Tory on some issues — Valentine's Day stumps for teen abstinence and marrying your best friend, and warns that career women may end up alone — he is open-hearted and generously conciliatory on gay rights, and he implies quite casually that multi-culti coupling may be the surest way to dispose of racism.

Best of all, Marshall genuinely loves women, the more fire in their bellies the better. He bestows on Garner as satisfyingly crass a female revenge scene as I've seen since The First Wives Club. Hathaway gets to rip the flavorless Topher Grace a good one for applying a double standard. And when Julia Roberts, who plays a rather sad woman in Valentine's Day, lets loose one of the famously unladylike snorts of laughter that have enchanted audiences of both sexes since Pretty Woman and on back to Mystic Pizza, I wanted to thank Marshall for reminding us how happy she made us in her radiant youth, while also freeing her to display the formidable middle-aged self she's grown into.

In a suspiciously neat outtake that accompanies the closing credits, Roberts muses while cruising in a cab through Beverly Hills, "Yes, I once shopped here." Those of us who took umbrage then may forgive her now. So have yourself a lovely pink heart of a Valentine's dinner — or a no-holds-barred I Hate Valentine's Day party if you prefer. In this good-hearted piece of ephemeral fluff, you get to choose.