The Mekong River, one of the world's longest waterways, has a long and turbulent history. From its source in China's central highlands, it passes through six countries as it makes its way to the South China Sea — a journey of nearly 3,000 miles. In a five-part series, NPR's Southeast Asia correspondent Michael Sullivan journeys the length of the river and tells the story of the people who live along its banks.

In Part 3, he travels to Thailand and Laos, which are on opposite sides of the river known in their local languages as Mae Nam Khong. The two countries found themselves in different camps after the communist takeover of Laos in 1975. Now, they face different challenges.

Part of northern Thailand is so closely linked with drug production and drug trafficking that it boasts an official museum, built under royal initiative, chronicling the illicit trade.

The Hall of Opium is in the Thai province of Chiang Rai in the "Golden Triangle," a drug-producing area that overlaps the borders of Thailand, Burma, Laos and Vietnam.

A short film at the Hall of Opium explains that large-scale production of illegal opium and heroin started in the area less than 60 years ago. 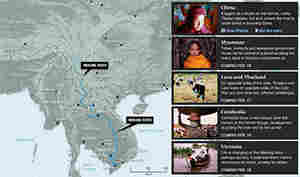 Interactive: A River And A Region Transformed

"Early government efforts to control drug production and trade met with little success. Traffickers moved freely along the long, ill-defined and insecure borders, and opium was the sole cash crop for poor hill villages remote from markets and roads," the film's narrator says.

As history lessons go, it's not bad. But for pure visuals, the museum can't compete with the view from the top of a hill less than a mile away in Sop Ruak: directly below is Thailand; to the left is Myanmar; to the right, just across the Mekong River, is Laos.

Yuthana Thungkaburee, a longtime resident of the area, says opium was produced in Thailand, Myanmar and Laos, and often transported down the Mekong River for export — opium that found its way to the U.S. and Europe in its more refined form as heroin.

But Afghanistan provides most of the world's opium these days. The Thai government, with help from abroad, has put a major dent in the opium trade here, and re-branded the Golden Triangle — in Thailand at least — as a tourist destination.

The Mekong In Thailand And Laos

Hordes of travelers — mostly Europeans — now pack the tourist boats and souvenir stands along the stretch of the Mekong at Sop Ruak.

Smaller boats take gamblers — mostly Asian — to casinos across the river. Thai tourists prefer the casinos on the Myanmar side while the Chinese flock to the new, gold-domed casino on the Lao side. And not everyone in Laos is happy to see them.

"In casino, all Chinese. That area is Chinese, this area is Lao," says one souvenir vendor, who declined to give her name. "It's not good if many Chinese come."

Antipathy toward China and the Chinese is heard frequently in Laos. In the past century, Laos was a French colony; in this one, some fear, perhaps it is becoming a Chinese colony.

Many Laotians were proud when their country hosted the Southeast Asian Games, a regional multisport festival, in December. But others wondered whether the honor came at too high a price: The games were held in the capital, Vientiane, at a new stadium complex built and paid for by China.

In return, many Laotians say, the government promised China a good chunk of land in Vientiane for a satellite city to accommodate some of China's growing population.

It's a sensitive topic in Laos, and talking about it openly all but guarantees a visit from the police — even as the government strenuously denies making such a deal. But many Laotians are quietly seething and embarrassed.

"We are helpless," one businessman says bitterly. "Our ideological brothers China and Vietnam are strong, and we are weak. What can we do?"

It's a problem largely of the government's own making. After the communist takeover in 1975, many of the country's best and brightest fled. It was a time when the Lao People's Democratic Republic — still the country's official name — was plunged literally into darkness and when Soviet-style planning made an already poor country even poorer.

The Laotians don't have to look far to see how things could have been different. 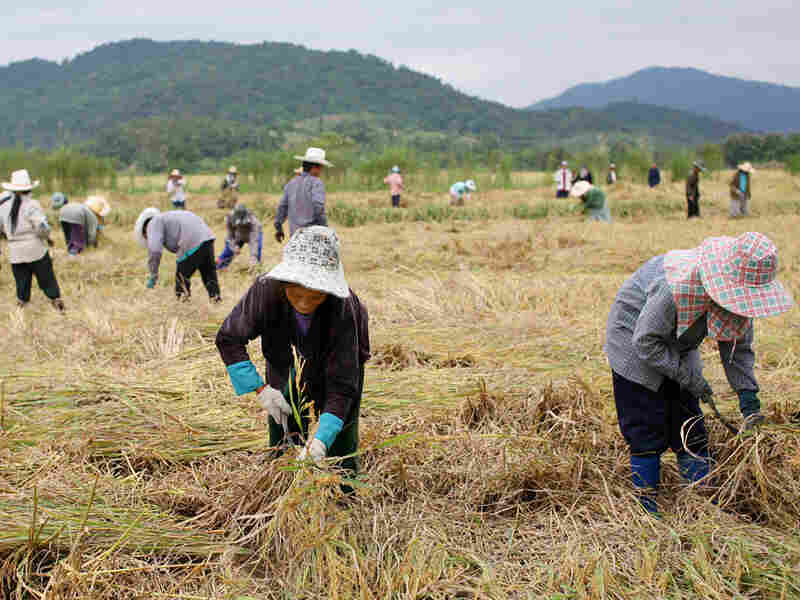 Thai farmers cultivate rice near Chiang Saen, near the Mekong River. Thailand is the largest rice exporter in the world. Christopher Brown for NPR hide caption 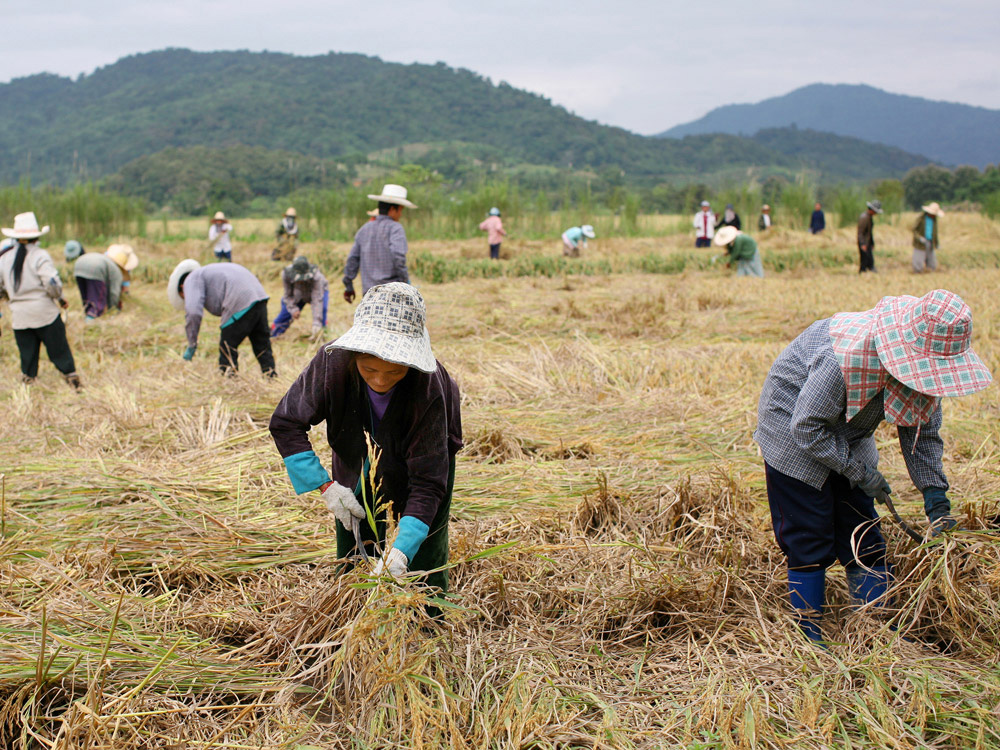 Thai farmers cultivate rice near Chiang Saen, near the Mekong River. Thailand is the largest rice exporter in the world.

On the Thai side of the Mekong, the electricity is constant, the roads modern, and rice farmers such as 28-year-old Chinawat Manoma are happy with their lot.

Chinawat, who lives further downriver near the city of Chiang Khong, says things are much better than they were in his parents' time. New farming techniques, new seeds and easy loans have helped make Thailand the world's largest rice exporter.

And that has helped make Chinawat solidly middle class, with a new house, two TVs and two tractors — which he rents out to other farmers. His 7-year-old daughter is already in an elite school, he says proudly, thanks to a strong showing in a nationwide exam.

He predicts she will be the first in the family to graduate from university. Not bad, considering her grandparents didn't finish grade school.

Back on the Lao side of the Mekong, Thai music blares from the speaker at a riverside bar in the southern town of Thahkek. The Laotian patrons nurse their beers as they stare, with some envy, at the new cars, new motorcycles and new businesses on the Thai side. It's clear Laos lags far behind Thailand in terms of development; it's also clear it's not entirely the government's fault.

In the soaring limestone formations of Khammouane province near the border with Vietnam, some 40 miles to the east of the Mekong River, bomb disposal teams try to clear leftover ordnance from the Vietnam War.

The U.S. was never officially at war with Laos. But it dropped more bombs on the country than it did on all of Vietnam, an estimated 1.6 million tons. The goal was to disrupt Vietnamese supply lines along the Ho Chi Minh trail, but not all of the ordnance did what it was supposed to.

David Hayter, country director for the Mines Advisory Group in Laos, estimates that about 30 percent of all ammunition of that period did not detonate.

He says leftover ordnance still kills or maims dozens of Laotians every year: farmers plowing their fields, children playing with the rusted, tennis-ball-sized cluster bombs they find in the forest, or poor villagers trying to sell the metal — even the explosives inside — to scrap dealers.

In addition to the human cost, Hayter says, there is the economic cost of unexploded ordnance.

"A lot of agricultural land is denied to people because of the presence of [unexploded ordnance], and this is the main problem with it. ... It promotes and prolongs poverty because people can't do what they need to do. And even if they farm it, knowing that [unexploded ordnance] is present, they will not farm deeply enough to get the best quality crops," he says.

The U.S. government is now one of the most generous donors to programs such as this one. But it will take many decades — and many millions of dollars more — before the problem of unexploded ordnance is solved.

Back on the Mekong River, a few hours to the south of Khammouane, lies an opportunity for Laos at a place that was not kind to the colonial powers here in the past.

The French had big plans for the Mekong when they ruled. They were going to use it to extend their political and economic reach all the way into southern China. The river was going to be a major transportation link and a way for French naval vessels to get upriver and extend their military power as well. 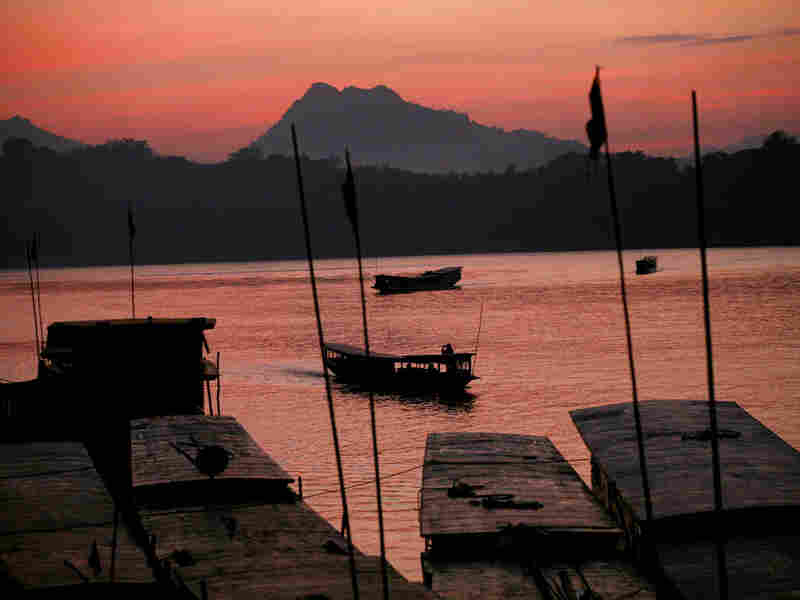 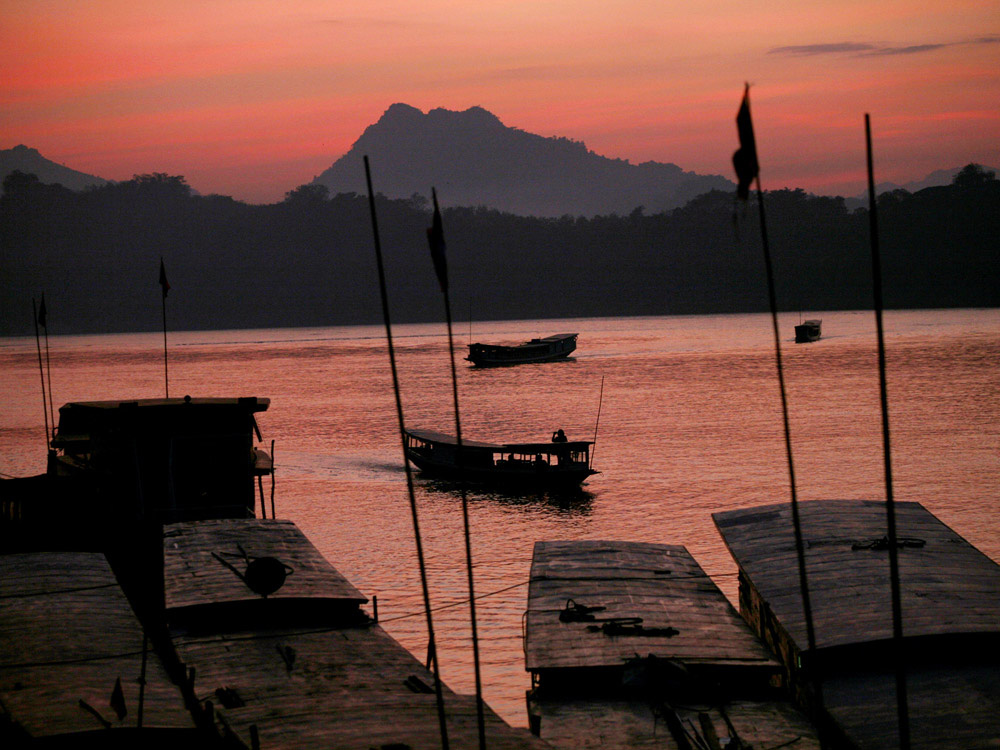 But when they reached the Khone Phapheng Falls at the border with Cambodia, they realized their plan wasn't going to work. The series of waterfalls — some as high as 45 feet and almost three-quarters of a mile long — was too high, too fast and too rocky to get up or to get around. The French tried for years to figure out a way to do so, but they never did.

The Laotian government hopes to do better with its plan. It wants to dam one channel of the falls to generate hydropower. It's part of a larger scheme to turn Laos into what the government calls "the battery of Southeast Asia," selling power to its energy-hungry neighbors, Thailand and Vietnam.

The Laotians and Cambodians are planning 11 dams on the Mekong and its tributaries. And that alarms some, who worry about what damming might mean for fish migration in one of the world's most productive fisheries.

Jeremy Bird heads the Mekong River Commission, an advisory group based in Vientiane and created by several countries along the river.

Unlike in North America, Bird explains, where the issues relate to six or seven species of salmon, there are about 60 to 70 commercially important migratory species in the Mekong.

"This is not just an issue of conservation of species," he says. "This is an issue where it is directly linked to the social well-being and the livelihoods of people who depend upon it."

Next: Cambodia, where 70 percent of the population depends on fish as its main source of protein.