Accessibility links
Ga. Billboards Spark Debate Over Abortion And Race Across Atlanta, a billboard campaign that calls black children "an endangered species" is raising questions over whether abortion providers target minority communities. Critics say the campaign fails to recognize the tough circumstances facing many black women when they decide to end a pregnancy.

An image of an Atlanta billboard with a caption that reads "Black Children Are An Endangered Species." TheRadianceFoundation.org hide caption 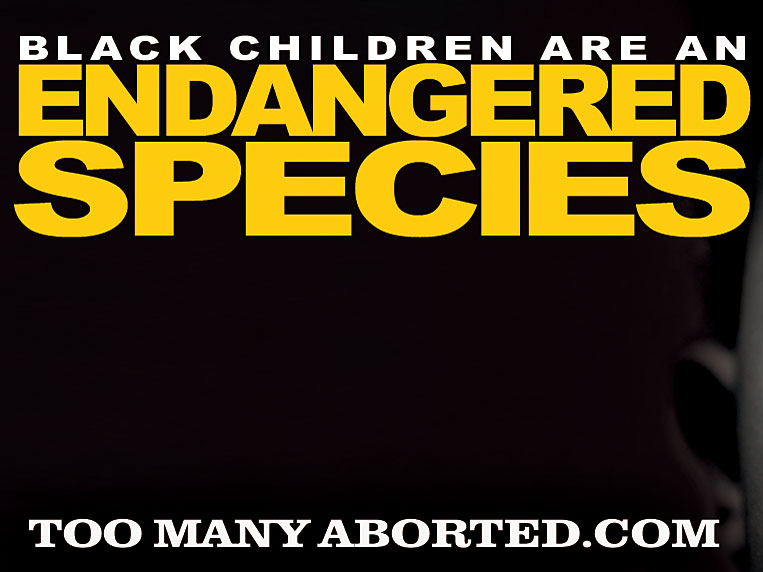 An image of an Atlanta billboard with a caption that reads "Black Children Are An Endangered Species."

A billboard campaign in Atlanta has raised questions over whether abortion providers target minority communities.

On the billboard is a black-and-white photo with a close-up of a black toddler's face. He looks troubled, nearly in tears.

The caption in bold letters reads: "Black Children Are An Endangered Species."

'We Wanted To Awaken The Community'

Catherine Davis with Georgia Right to Life says that the billboards are meant to grab people's attention.

"They don't know the impact that abortion is having on the black community," Davis says. "And so we wanted to awaken the community to the holocaustic impact abortion has had."

The billboards have raised the ire of some who live nearby.

"It's incredibly offensive," says Heidi Williamson of SisterSong, a reproductive health group for women of color. "And it's just horrific to have to drive by it everyday."

According to the Centers For Disease Control and Prevention, more than 50 percent of the abortions in Georgia in 2006 were performed on black women — though blacks make up about 30 percent of the state's population. While Williamson acknowledges the numbers, she sees the billboards as an attack on black women.

'The Enemy Is Poverty'

Williamson says making the choice when and whether to have children is a woman's right.

About 60 billboards have gone up in Atlanta so far. An additional 20 are expected by next week. They direct people to an anti-abortion Web site that calls abortion an assault on the black community — and says that Planned Parenthood and other clinics are targeting minorities to exterminate them.

"I believe the abortion industry is advertising; they're making it attractive," says Davis. "They're framing it in terms of civil rights in order to pull this particular demographic into their abortuary."

Abortion-rights activists deny the allegations. They say 86 percent of Georgia counties do not have an abortion provider. Of the 15 providers that exist, just four are in predominantly black neighborhoods.

Along With Billboards, A New Abortion Bill

In addition to the billboard campaign, a bill filed this week in Georgia would make it a felony to solicit or coerce a woman to have an abortion based on the race, color or sex of a fetus or parent.

Leola Reis with Planned Parenthood of Georgia says the law is just another attempt to restrict abortion.

"I think that these kinds of bills are a real distraction from the overwhelming issues that we have in this state," she says. "I think the community is going to become quickly tired of this kind of tactic."

Lynn Hogue, a law professor at Georgia State University, says the bill violates the First Amendment rights of clinics, as well as women's right to privacy.

While the debate continues in Georgia, The Radiance Foundation, which created the billboards, says it is in talks to expand the "endangered species" campaign to Washington, D.C., and perhaps to other cities.