Accessibility links
'Percy Jackson' Filled With Classical Mythology It's a proven movie formula: Take a popular series of books for kids, turn them into movies and watch the dollars roll in. It's worked for Harry Potter and Twilight. Now, Percy Jackson and the Olympians gets its turn on the big screen. There's a lot of classical mythology that can be learned from the movie but that may be the best thing that can be said about it.

It's a proven movie formula: Take a popular series of books for kids, turn them into movies and watch the dollars roll in. It's worked for Harry Potter and Twilight. Now, Percy Jackson and the Olympians gets its turn on the big screen. There's a lot of classical mythology that can be learned from the movie but that may be the best thing that can be said about it.

It is a proven movie formula: Take a popular series of kids books, turn them into movies, and watch the dollars roll in. Its worked for "Harry Potter" and "Twilight." Now, Percy Jackson and the Olympians gets its turn.

Critic Kenneth Turan hopes there wont be a sequel.

KENNETH TURAN: Here we go again. A boy goes to a prep school, and a teacher tells him he has magical powers.

(Soundbite of "Percy Jackson and the Olympians: The Lighting Thief")

Mr. PIERCE BROSNAN (Actor): (As Mr. Brunner/Chiron) There are 12 Olympian gods. The big three are the brothers Zeus, Poseidon and Hades. On several occasions, they would come down to our Earth and...

Unidentified Man: (As character) Hook up?

Mr. BROSNAN: (As Mr. Brunner/Chiron) They would hook up with mortals.

TURAN: Once Percy realizes hes a demigod - the son of Poseidon, one of the Olympians, and a mortal woman - he sets off on a quest to rescue his mother. She's somehow became trapped in the underworld. Along the way, he eats of the lotus, fights the many-headed hydra, and meets up with Uma Thurmans chilly Medusa.

(Soundbite of "Percy Jackson and the Olympians: The Lighting Thief")

Ms. UMA THURMAN (Actress): (As Medusa) Well this is a fabulous surprise. You have such beautiful hair. I once had hair like that. I was courted, desired by many suitors. But that all changed because of your mother, the woman who cursed you.

TURAN: Because The Lightning Thief is about a young hero with parental issues, who is marked as the chosen one by his peers, it inevitably reads like a Harry Potter knock-off. But unlike the Potter novels, this book has been unable to expand beyond its core fan base of 10-year-old boys. So the filmmakers have changed Percys age from 12 to 17. And theyve restructured the plot to emphasize the action and the grotesqueness of mythological beings, all with an eye towards attracting an older male demographic. And theyve done it without any particular grace or skill. This is generic filmmaking at its most banal, a simple-minded simplification of a not overwhelmingly complex book.

Theres a lot of classical mythology that can be learned from The Lighting Thief, but thats the best that can be said about it. Dante put "abandon all hope, ye who enter here" on the gates of the underworld. Thats a message that anyone tempted to see this film should take very much to heart. 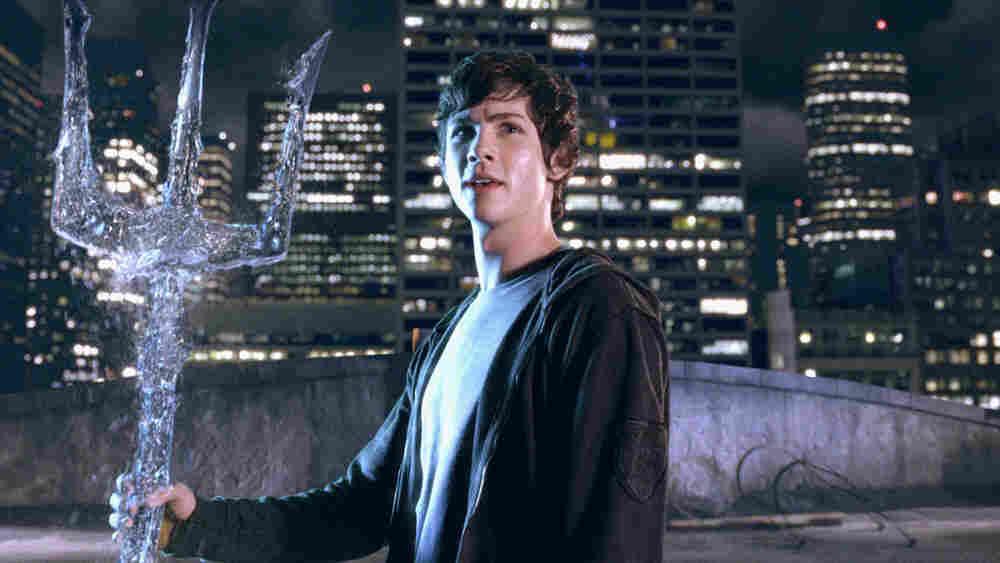 With the Harry Potter franchise in its twilight, the market has officially opened up for kid-friendly fantasy movies featuring precocious wizardry, mythical creatures and titles of marquee-busting breadth. Enter Percy Jackson & The Olympians: The Lightning Thief, the first adaptation of Rick Riordan's popular young-adult series about an outcast New York boy who discovers he's the son of Poseidon.

It's an irresistible hook: Greek Gods mixing it up with mortals in contemporary times? The perfect opportunity to blow the dust off some classic stories for mass consumption. And who better suited to the task than Chris Columbus, the director who brought the first two Harry Potter entries to the screen?

Almost anyone, I'd guess. In attempting to retrofit Riordan's series to Harry Potter's specs, Columbus and screenwriter Craig Titley have made the equivalent of a cut-rate toy — one that replicates a beloved figure using an ill-formed hunk of plastic. Here, that hunk of plastic is Percy Jackson (Logan Lerman), a wide-eyed sixth-grader in the book, but now a sullen teenager with a CW haircut and an air of vague rebelliousness to match. Long shielded from the knowledge that he's a demigod, the product of a union between Poseidon and a Muggle (Catherine Keener), Percy suddenly gets called into action when Zeus' lightning bolt gets stolen and he's the prime suspect.

The plotting doesn't end there, however, not by a long shot. Alongside his wisecracking best friend Grover (Brandon T. Jackson), a satyr and "junior protector," Percy is whisked away to the Hogwarts School — strike that, Camp Half-Blood, a training ground for demigods to hone their newfound powers. Once there, he and Grover team up with Annabeth (Alexandra Daddario), the fetching and feisty daughter of Athena, to rescue Percy's mother from the clutches of Hades, who's holding her in exchange for the lightning bolt. But first, the trio must dash around the country in search of special pearls for their voyage to the Underworld, squaring off against such familiar foes as Medusa, the Chimera and the Lotus-Eaters. 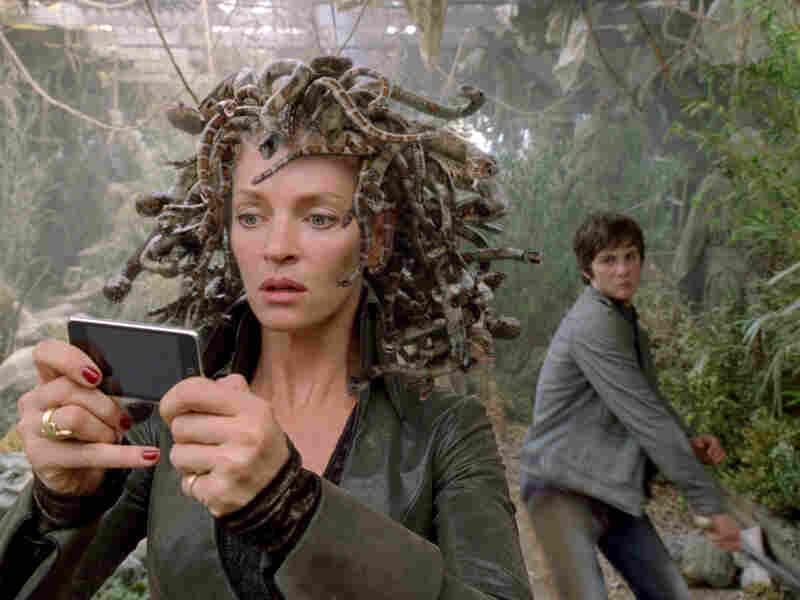 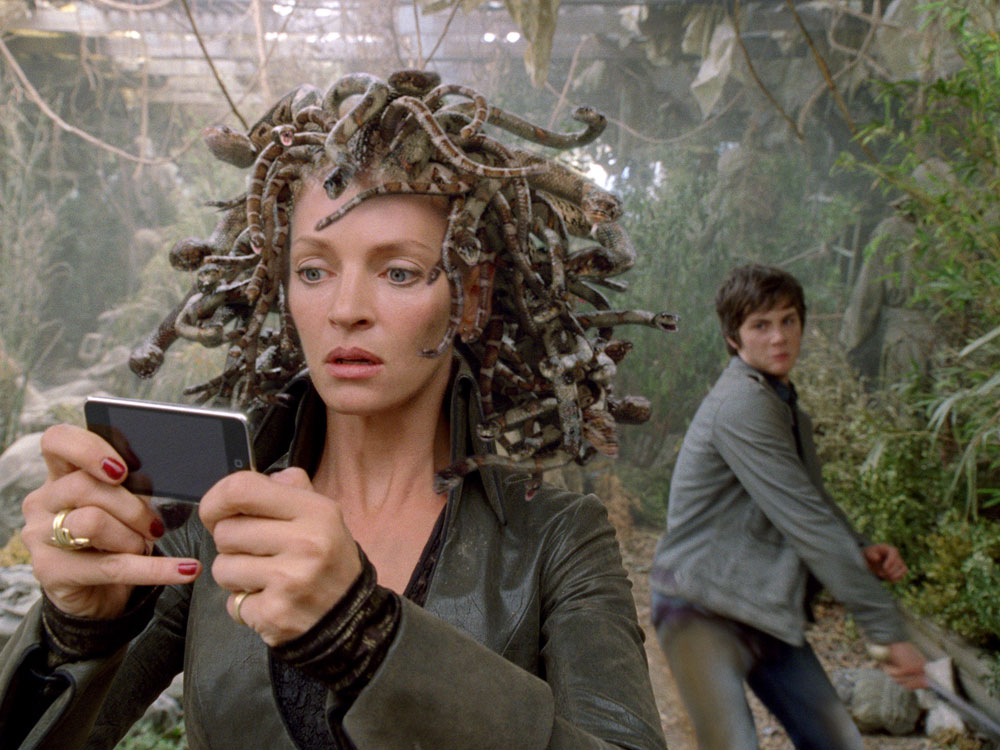 Zeus may rule the heavens, but in The Lightning Thief, he's no match for the Greek God of Exposition. Vast swaths of dialogue are devoted to bringing Percy up to speed on the mythical universe that he missed while nodding off in English class — and that doesn't count the various tutorials on the magical pen, shoes and map that come into his possession. And the payoff for giving the Greek stories a modern-day twist? Feeble stuff like thwarting Medusa by using the reflective surface on an iPod or costuming Hades like an aging rock star.

Nothing in The Lightning Thief works, from the chintzy CGI effects (poor Pierce Brosnan affects an awkward gait as a centaur) to the painfully obvious musical cues (a moratorium on "A Little Less Conversation" to introduce a Las Vegas sequence, please). But as with past Columbus films like Stepmom and Home Alone, the film becomes particularly risible when family matters come into play. Since the young demigods, by nature, are raised in single-parent homes, their encounters with the gods are characterized less by wonder than by the therapy-speak of wounded kids with daddy issues. It's the psychobabble, more than any ancient magic, that has the power to reduce the fearsome likes of Zeus, Athena and Poseidon to the puny size of mere mortals.