Accessibility links
Program Helps Low-Income Smokers Kick Habit Even as the nation has made big progress in reducing smoking rates, the rates remain high among the poorest Americans. A program in Massachusetts shows that providing counseling and quitting medications can help: Smoking among low-income people in the program decreased by 26 percent. 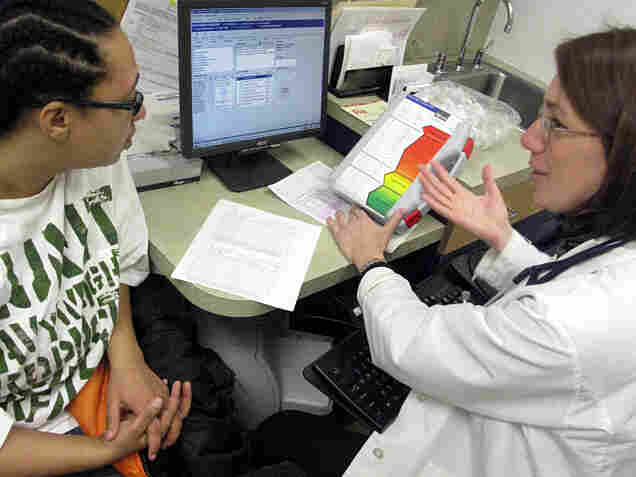 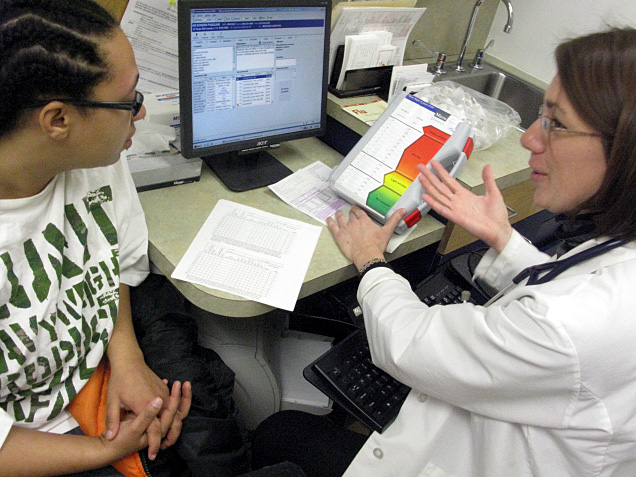 The overall U.S. smoking rate is half what it was in the 1960s. But this isn't true among low-income Americans: They're still smoking as much as everyone was a generation ago.

Massachusetts health officials say it doesn't have to be this way. They say they've found a way to get even the most hard-core smokers to quit.

The program is designed to help people like Sondra Pasquine. Pasquine, 24, works as a nursing home aide, and she wants to stop smoking. Through the Massachusetts program, she has a smoking cessation counselor, nurse Allison Diamond of the Dorchester House health center.

At a recent counseling session, Diamond pushed Pasquine to articulate what she doesn't like about smoking.

"What don't I like about it? The smell. It gets in your clothes, your hair," Pasquine replies. "And I just don't want cancer." Pasquine has seen family members suffer from smoking-related cancer.

During their 20-minute session, Diamond gives Pasquine some tips on how to be more conscious about what drives her to light up. She suggests jotting down the reason every time, and gives her a "pack wrap" diary that fits like a sleeve around her cigarette pack.

Diamond also writes a prescription for Chantix, a drug that blunts nicotine pleasure.

There's nothing revolutionary about the method. But preliminary data from the Massachusetts Department of Public Health indicate that getting low-income people like Pasquine to quit may just be a matter of giving them access to the same smoking cessation aids that richer and better-educated people have — nicotine patches, drugs and counseling.

That access — plus a big media campaign targeted at people enrolled in MassHealth, the Bay State's Medicaid program — appears to have brought impressive gains.

More than 75,000 MassHealth members have taken advantage of state-funded quit-smoking programs. Nearly half, the state says, have successfully quit.

Before the big push, about 40 percent of adults on Medicaid were smoking, a rate that hadn't declined in many years. But between 2006 and 2008, state figures show, their smoking prevalence dropped by 26 percent. By comparison, smoking among people without insurance coverage, a group largely on the lower end of the income scale, was unchanged.

"I think it's made a huge difference," says Dr. Nancy Rigotti, who heads tobacco research and treatment at Massachusetts General Hospital. She credits the generous Medicaid benefits with giving many low-income people the type of chance to quit they never had before.

Rigotti notes that federal regulations require that nicotine patches be sold in packages that contain a week's supply. That was intended to avoid dependence on the patches.

"So if you don't have a lot of money and you're hooked on nicotine, you may be able to scrabble together enough money to pay for a pack of cigarettes, but you probably can't buy a week's worth of nicotine patches," Rigotti says.

The Power Of Social Pressure

The Massachusetts program, launched as part of the state's landmark 2006 law that has gradually extended health insurance to almost all residents, has its skeptics.

Michael Siegel of the Boston University School of Public Health doesn't doubt that there's been a substantial drop in smoking prevalence among the Medicaid population. He's less convinced about the data on fewer asthma admissions and heart attacks, because there was no control population.

And Siegel, like others, doubts that providing low-cost smoking cessation pills and patches has made the difference. He thinks the media blitz should get most of the credit.

"My opinion is that what we're likely seeing here is that 80 percent of smokers want to quit anyway, and this publicity campaign got these smokers to pull the trigger," Siegel says. "I don't think it's necessarily [that] the medication itself had the effect, because quit rates are dismal from medication."

Others say it's possible that medication and counseling may give a needed extra boost to low-income smokers, who live in an environment where far more family members and friends smoke.

"It's especially hard when you have friends that smoke," says Pasquine. "You know, you see all your friends whip out cigarettes. It's like you're the only that don't do it."

There's no doubt that social factors exert a powerful force on pushing people to start smoking in the first place. And Nicholas Christakis of Harvard University says there's good evidence that social factors can work in the opposite direction — to encourage quitting.

At some point, he says, the phenomenon can reach a tipping point. As the culture of smoking changes in a population, there are fewer smokers, and that makes it easier for the remaining ones to quit.

But of course, it's fundamentally a one-person-at-a-time deal. That's why, back at Dorchester House, Allison Diamond wants Sondra Pasquine to do one more thing before she leaves — blow into a carbon monoxide detector.

Diamond explains that carbon monoxide is in auto exhaust and cigarette smoke. "So the same thing that comes out of the exhaust pipe is in cigarettes, and you're breathing that in."

The detector shows Pasquine's carbon monoxide level is in the red "danger zone" from the cigarette she smoked that morning. She looks disgusted.

Diamond guesses that Pasquine has a 50-50 chance of quitting in the next year. She'll probably need several more Medicaid-financed attempts.

But Diamond says the more times people try to quit, the better chance they have. Because each time, they gain more insight into why they're smoking.