Accessibility links
Urban, Rural Areas Battle For Census Prison Populace Unless something changes, prisoners will again be counted in this year's census as residents of the places where they're locked up, not their hometowns. That means more political power for mostly rural and white prison host communities, and less for mostly urban and minority neighborhoods. 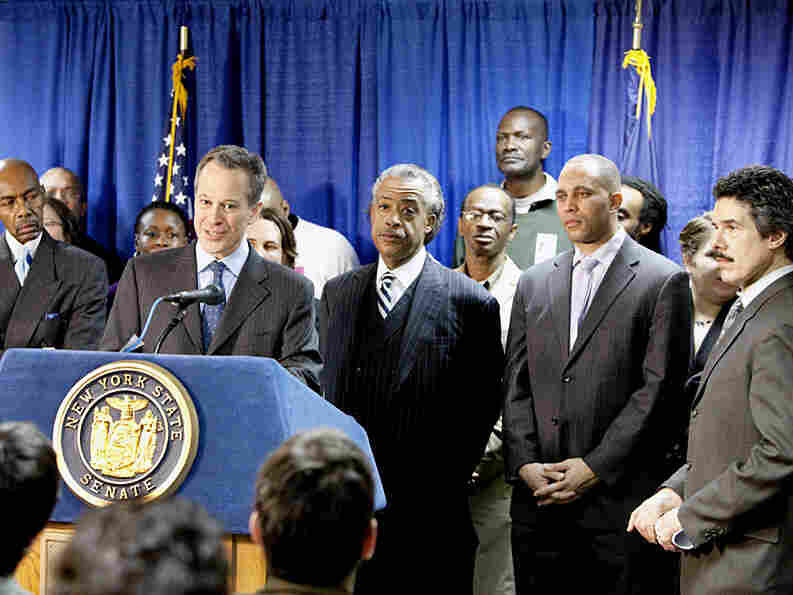 Lawmakers and social justice advocates gathered at New York City Hall in January to launch a campaign to have prisoners counted for the census in their hometowns rather than where they're locked up. Courtesy of New York State Senate hide caption 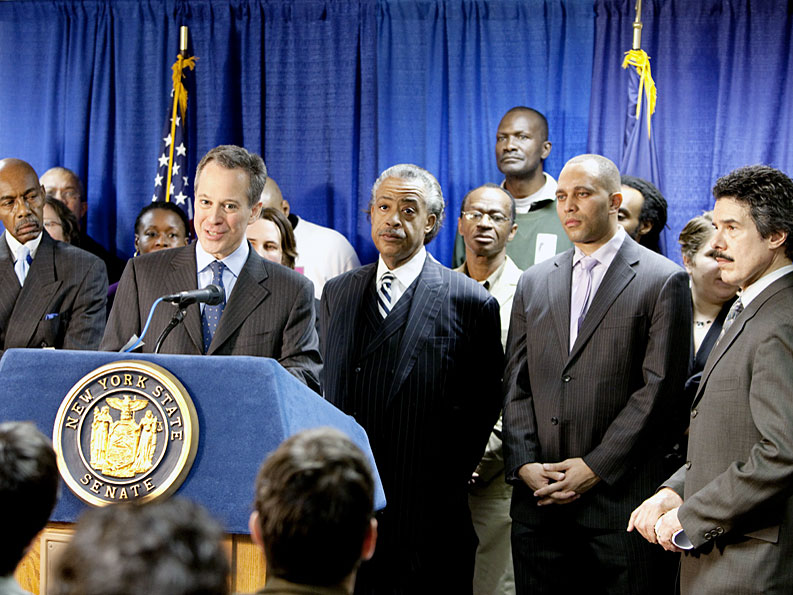 Lawmakers and social justice advocates gathered at New York City Hall in January to launch a campaign to have prisoners counted for the census in their hometowns rather than where they're locked up.

An urban-versus-rural battle is brewing over the census because prison inmates are counted as residents of the prisons where they are locked up. That inflates the population of the mostly white, rural towns that have the prisons.

Ten years ago, the last time there was a census, 45,000 mostly black and Latino prisoners from New York City were locked up in the farm country of upstate New York. As inmates, they couldn't vote. But they were counted as residents of those rural political districts anyway. Chevelle Johnson was one of them.

"It's like a double slap in the face," Johnson says. "I can't vote, and then you take my body and put it in another community, so my community has no political power, so none of my interests get taken care of."

"Prisoners are not part of the community of interest that surrounds the prison," Wagner says.

In addition to political and legislative issues, counting prisoners where they are incarcerated instead of where they originally resided also affects demographic data. Some examples:

As 92 percent of prisoners are men, both counties with prisons and the home counties of the prisoners reflect skewed gender distribution data. In the U.S., the ratio of unmarried men to unmarried women only varied from 79 to 114 unmarried men per 100 unhitched women on a state-by-state basis. But on a county level, the range jumped from 53.8 to 362 unmatched men for every 100 unmarried women.

From 1990 to 2000, census reports of increases in black and Hispanic populations in some rural areas reflect new or larger prisons in these areas, but the raw data suggest greater diversity in these areas.

Including the meager pay of prisoners in counties' per capita income falsely lowers the number — and raises it in counties with large numbers of former prisoners. This makes counties with prisons more eligible for low-income social programs — and the home counties of prisoners less qualified for the programs.

All prisoners are older than 18. Age distribution in counties with prisons skews up, while it skews down in the counties where the prisoners came from.

In the early 2000s, southern Virginia's Sussex County was the fastest-growing county in the nation, according to the census. But the county had opened two prisons in the late 1990s — and if their residents weren't included, the county's population had actually declined, the Washington Post reported.

They're more interested in drug, crime and housing laws than, say, farms.

"The system of one person, one vote entirely breaks down when we take people from one community of interest — and then credit them to a completely different community for districting purposes," Wagner says.

Wagner's organization wants to change the system nationwide. And it's starting with New York.

'Civil Rights Issue Of The Year'

"I think that this is the voters' rights and civil rights issue of this year in the state of New York," Sharpton said. "Where you use people's bodies to count against their interests — there's nothing more blatant than that."

The fix is actually simple. Just count inmates in the communities where they come from when new political districts are drawn after the 2010 census. The census count itself doesn't have to change at all.

But in upstate New York, amid the rolling fields where the prisons sit, people feel threatened.

It's deadline time in The Ogdensburg Journal newsroom, where publisher Chuck Kelly has been a reporter and civic booster for 55 years.

"We have the second lowest per capita income in the whole 62 counties of the state of New York," Kelly says. "We're poverty. There's no other way to tell you that."

Ogdensburg is a rusty city on the St. Lawrence River, on the Canadian border. Its identity is deeply rooted in corrections. A century-old state psychiatric center occupies prime riverfront. Today, most of its stately red sandstone buildings sit empty, the result of mental hospital downsizing in the 1970s and '80s.

Kelly says 1,000 jobs were lost. He led a fight to replace them with two prisons, at a time when other places were fighting to keep jails away.

"The truth of the matter is New York City and the metropolitan areas didn't want them," Kelly says. "We needed the jobs, so we went after those jobs."

If Ogdensburg benefits from the census count, Kelly says, it's just compensation for the public security risk of housing criminals.

State Sen. Darrel Aubertine represents a district with five prisons, including the two in Ogdensburg — about 3,500 inmates in all. He says they use water and sewer and other infrastructure.

"That in part is paid for by those inmates being counted in this region," Aubertine says.

He also says he'll vote against a bill to change the way prisoners are counted. Not surprisingly, other lawmakers with prisons in their districts will, too.

The reality is that Upstate New York would lose political clout.

State Sen. Eric Schneiderman of Manhattan is the bill's sponsor. He says similar efforts are getting started in other states, such as Illinois, Texas and Maryland. He says it's fundamental, democratic justice.

"Poor communities where these prisoners come from need resources," Schneiderman says. "They need good schools. They need treatment programs. And very often the representatives of the districts who are maintained by the artificial inflation provided by the prison count, they vote against those things."

In New York politics, downstate and upstate are painted as two different worlds. But the places prisoners come from and the places where they are bunked share a lot in common, such as poverty and unemployment.

They also share a hunger for the good schools and jobs that political power brings.