Accessibility links
Lines Between Fair Use And Copyright Theft Blurry Hollywood studios and the recording industry have railed against copyright infringement, but fair use advocates say intellectual property can be widely shared — legally. As long as people are creating something new out of copyrighted work, it's fair game. 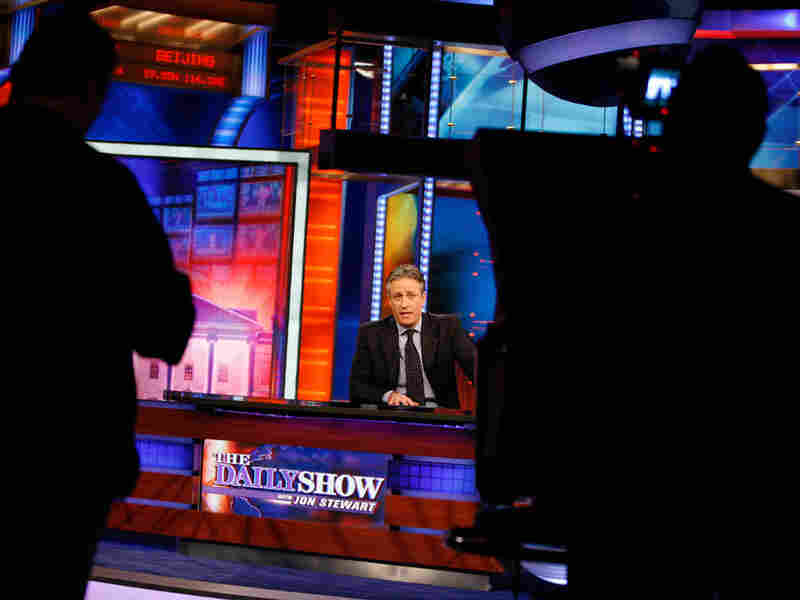 The Daily Show with Jon Stewart can legally use clips of other networks' news coverage because of fair use policies. AP hide caption 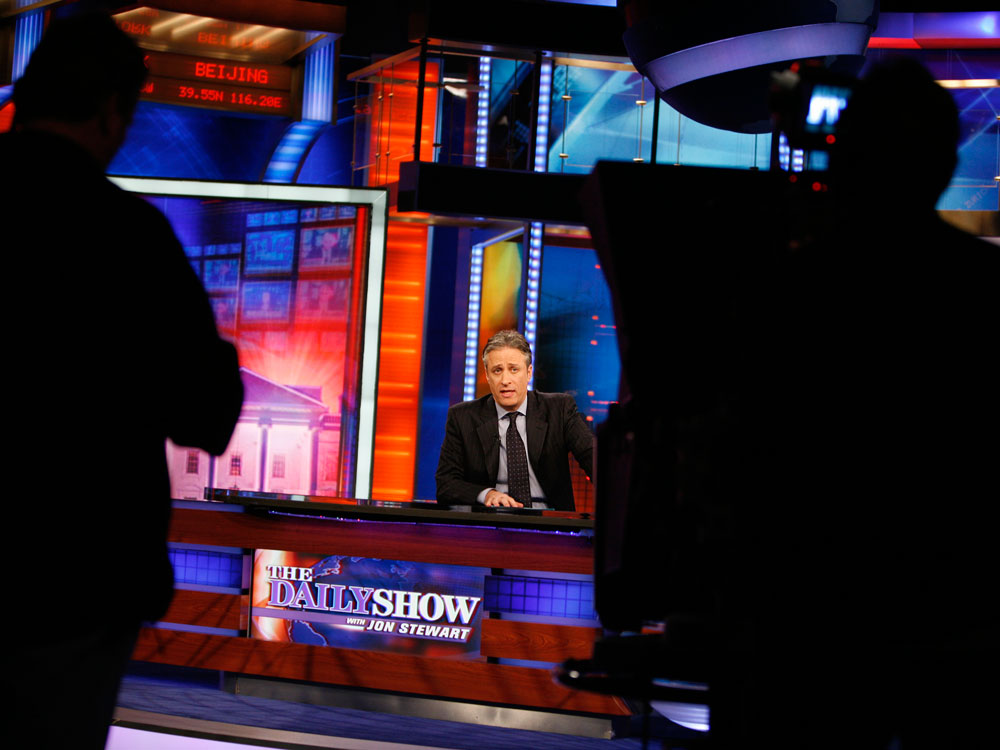 The Daily Show with Jon Stewart can legally use clips of other networks' news coverage because of fair use policies.

Every time you listen to your iPod, use your TiVo or watch Jon Stewart on TV, you're participating in something called "fair use."

It's the idea that artists, filmmakers, reporters and commentators have the right to take copyrighted material without permission or payment, as long as they're using those materials to make something new.

While Hollywood studios and the recording industry have spent millions of dollars making their position on copyright infringement abundantly clear, fair use advocates have a tougher time getting their message across.

A Few Recent Examples Of Fair Use Cases

Gigi Sohn is the president of Public Knowledge, a Washington, D.C., nonprofit that advocates for an open Internet. She brought about 100 lawyers, filmmakers and other stakeholders together for World's Fair Use Day. People like Jonathan McIntosh showed up. McIntosh is a self-described pop culture hacker who created a video mash-up of the Twilight vampire franchise and Buffy the Vampire Slayer.

McIntosh says his remix is a pro-feminist critique of Twilight, and that's why it's a fair use: because he's using excerpts to comment on the original works, thus producing something new out of copyrighted materials.

It's the same principle that the producers of The Daily Show on Comedy Central employ every night.

But even fair use advocates admit the concept can be "mushy," to use Sohn's word. It's up to the courts to decide what is and isn't fair use on a case-by-case basis. But Sohn says that flexibility is exactly what makes the doctrine work.

"I really think we're talking about balance," Sohn says. "You want strong enforcement when people are breaking the law. But you also want strong limitations and exceptions when people create and innovate."

Imagine if in 1984, after the Sony Betamax decision had come out, we had said, 'OK, we're gonna stop there' ... We wouldn't have MP3 players like iPod. We probably wouldn't have TiVos.

That applies not just to content, but to the devices that deliver it. Sohn says fair use is what gives you the right to record TV shows and watch them later, thanks to the Supreme Court's ruling in the so-called Betamax case.

"Imagine if in 1984, after the Sony Betamax decision had come out, we had said, 'OK, we're gonna stop there," Sohn says. "You can record things for home use, and that's the limit of personal fair use. We wouldn't have MP3 players like iPod. We probably wouldn't have TiVos that can send things to your computers."

Fair use is what allows you to make your own copies of songs and TV shows for your personal use. But it's the high-profile copyright infringement claims that tend to get more attention — including a 2008 case involving presidential candidate John McCain.

The Ohio Republican Party used a few seconds of the Jackson Browne song "Running on Empty" in a campaign ad about Barack Obama's energy policy. Browne sued. And McCain's lawyer, Lincoln Bandlow, tried to mount a fair use defense.

"They didn't really take anything from Jackson Browne," Bandlow said. "They didn't deprive him of a sale of the song."

That case settled out of court, which happens a lot with fair use disputes. The lack of rulings, while making the law flexible, also adds to the confusion. That's why Pat Aufderheide at American University's Center for Social Media says more exposure for fair use is critical.

"To help educate people at both ends of the spectrum: the kids who are coming up who are often erroneously being told that all copying is plagiarism," Aufderheide says. "And our bosses and librarians and gatekeepers who haven't gotten the memo yet."

Fair use applies to intellectual property across mediums, from music to books to art. Because cases often don't make it to court and rulings are often contradictory, sometimes it's hard to say what is legal or illegal until a judge makes a ruling. A few recent examples: 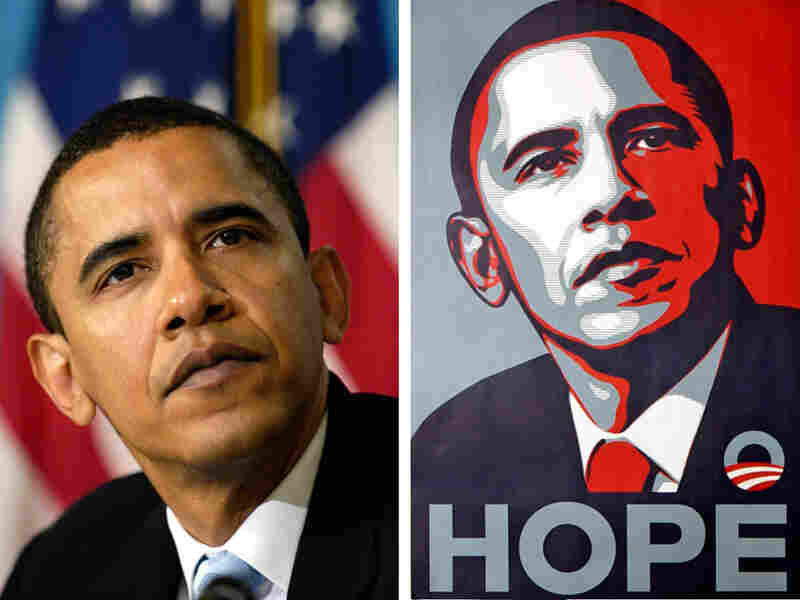 The poster created by artist Shepard Fairey, next to the AP photo upon which it was based. Mannie Garcia/AP/Shepard Fairey hide caption 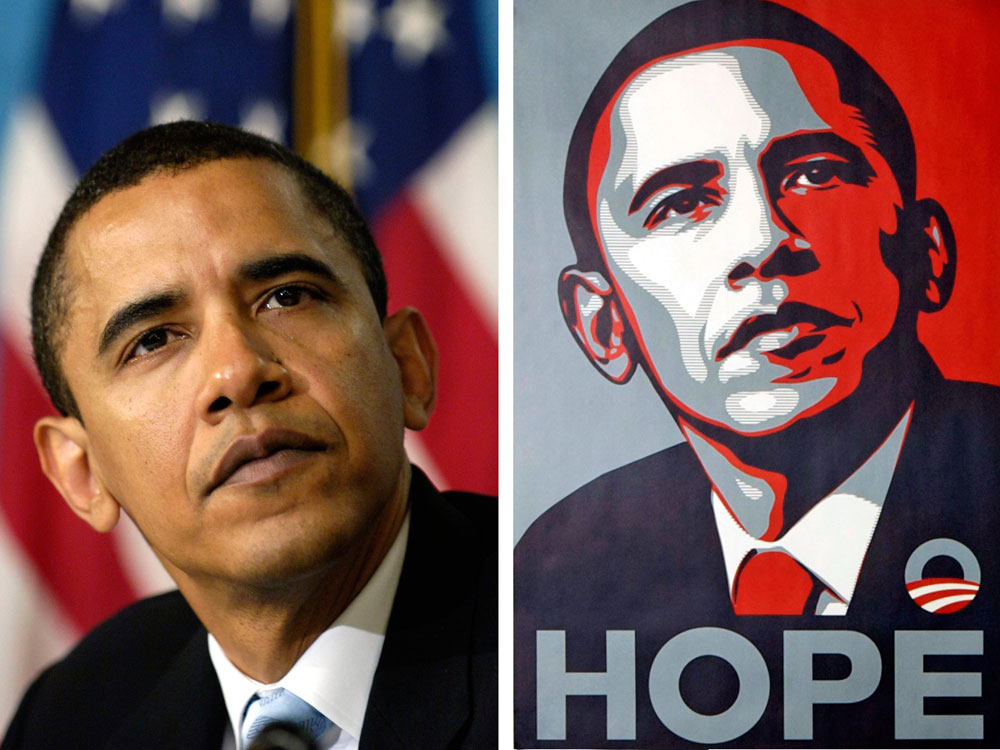 The poster created by artist Shepard Fairey, next to the AP photo upon which it was based.

Artist Shepard Fairey, who created the iconic Obama "Hope" image that was widely used during the 2008 presidential campaign, came under fire from The Associated Press for using a copyrighted image.

When the AP raised the issue with Fairey, he said the image was based off a photo of Obama and George Clooney that was taken at a Darfur event in 2007. He later admitted to having actually used a photo taken at a news event at the National Press Club in Washington, D.C. (pictured), which required less cropping to transform into the stylized image.

Fairey argues that he still changed the photo enough for the new work to fall under fair use laws. The AP says he didn't.

Fairey and the AP are suing each other for the rights to the images.

'Harry Potter Lexicon': Not Fair Use

Author J.K. Rowling sued the publishers of an encyclopedic Harry Potter guidebook called The Harry Potter Lexicon. Rowling argued that the guide did not fall under fair use standards because, unlike other companion or reference books to her series, it offered little new commentary or analysis, and lifted almost identical passages from her books. 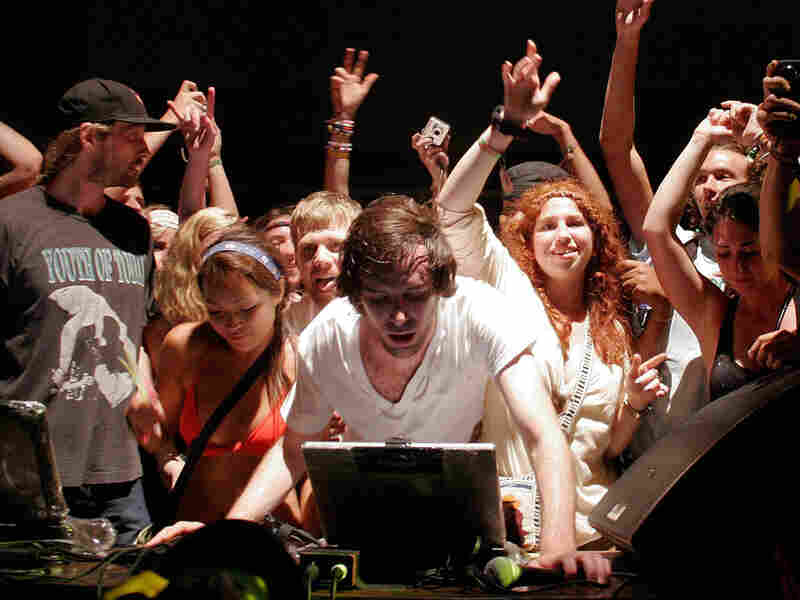 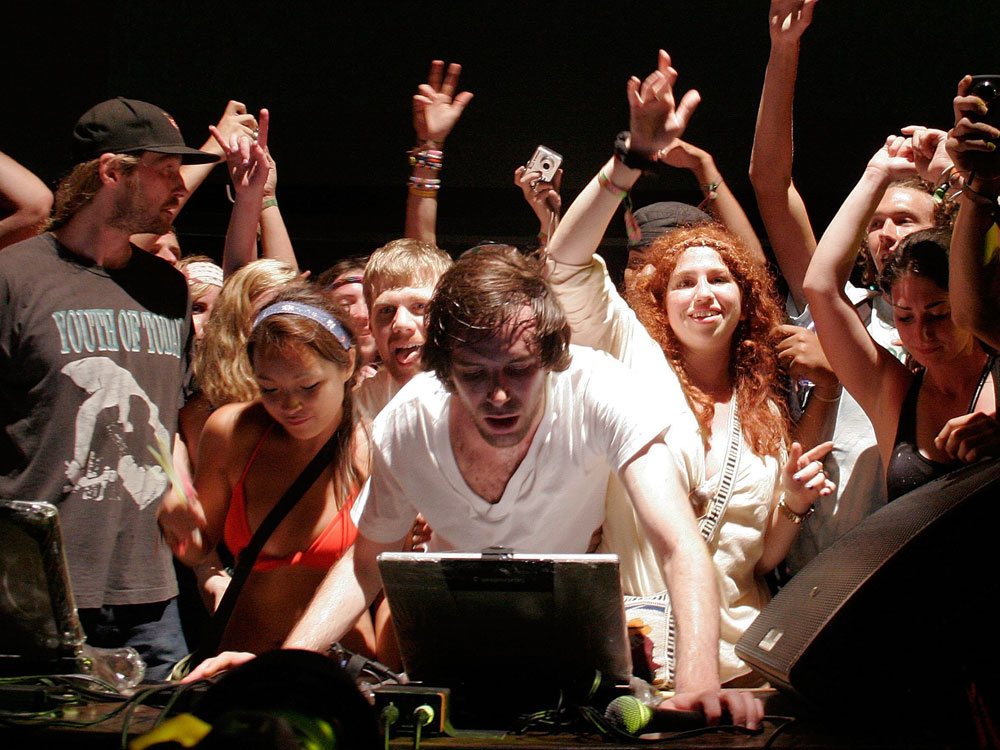 In 2008, the judge ruled in Rowling's favor, saying that the reference work borrowed too much of Rowling's work and would cause her irreparable harm as a writer.

But unlike other hip-hop artists and DJs who have gotten into legal trouble for sampling, industry experts say Gillis has never been sued.

The fair use standards and legal precedent for sampling are murky, but they generally take into account the length of the sample, how much it is changed from the original, and if the new work could hurt the sales of the original. 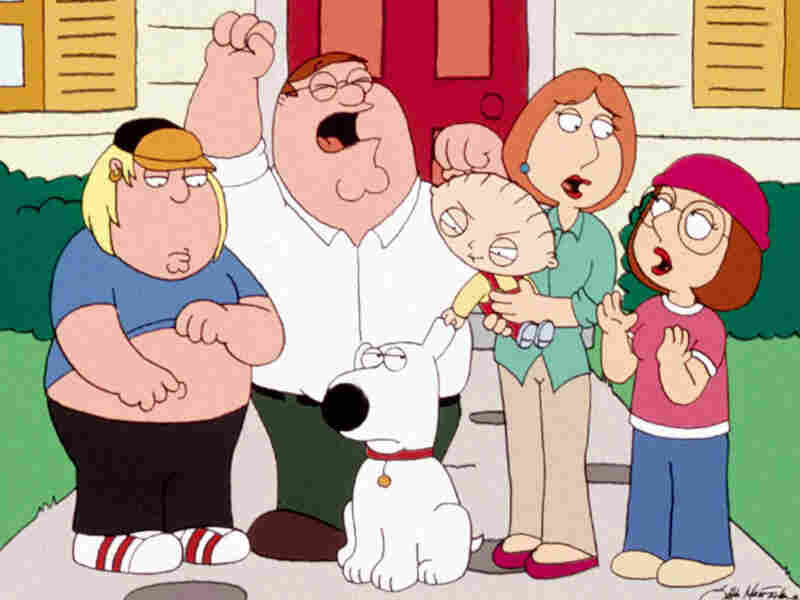 A parody of the song "When You Wish Upon a Star" was protected under fair use. AP/Fox hide caption 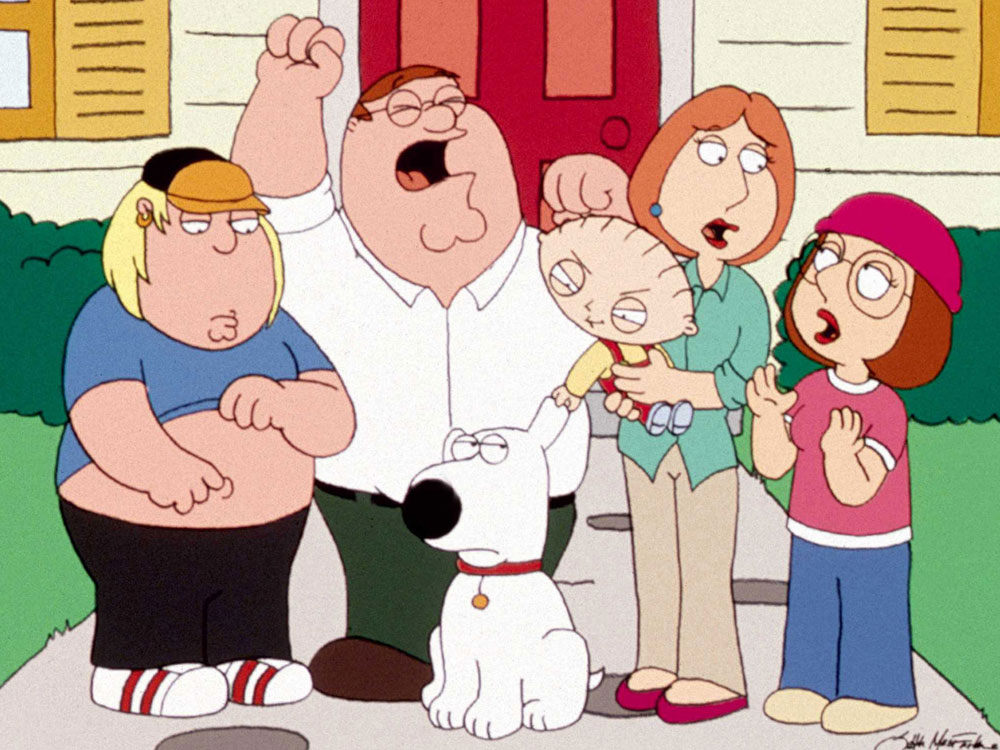 A parody of the song "When You Wish Upon a Star" was protected under fair use.

Bourne Co., a music publisher that owns the rights to the song "When You Wish Upon a Star," sued Fox and the creators of the animated show Family Guy for airing a parody of the song.

The lawsuit stated that the parody, called "I Need A Jew," was offensive and did damage to the original.

In 2009, the judge struck down the suit, ruling that the lyrics were "strikingly different" from those of the original.