Accessibility links
Top Taliban Commander Caught In Pakistan The Taliban's top military commander has been captured in Karachi, Pakistan, during a joint CIA-Pakistani operation. One Pakistani officer says Mullah Abdul Ghani Baradar, described as the No. 2 behind Taliban founder Mullah Muhammad Omar, "was talking" to interrogators. 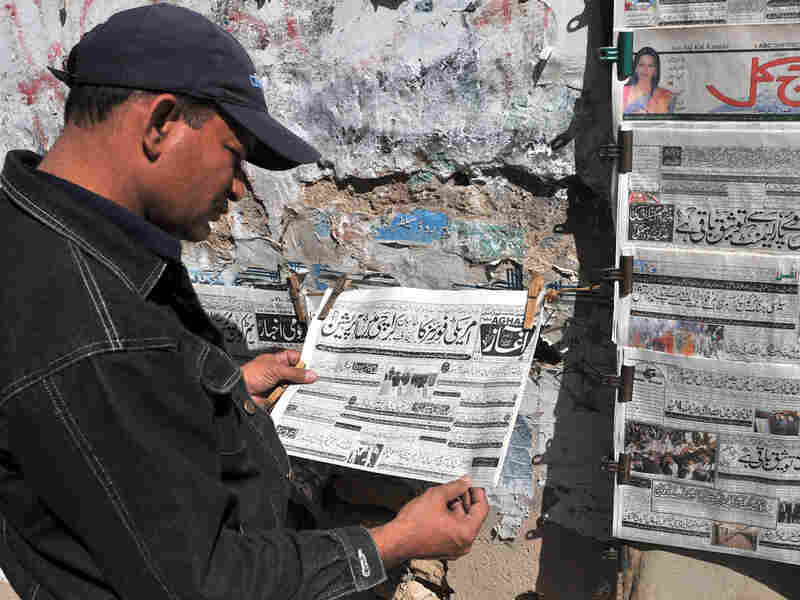 A man at a newsstand in Karachi, Pakistan, reads an Urdu-language evening newspaper reporting the capture of a top Taliban commander. Rizwan Tabassum/AFP/Getty Images hide caption 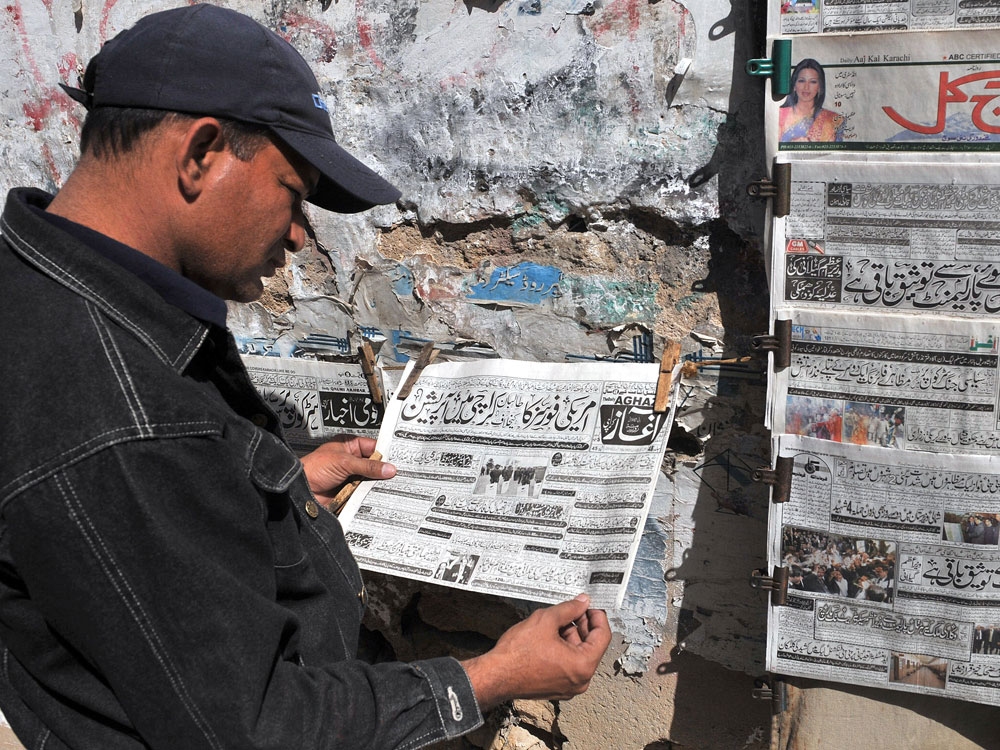 A man at a newsstand in Karachi, Pakistan, reads an Urdu-language evening newspaper reporting the capture of a top Taliban commander.

The Taliban's top military commander has been captured in the Pakistani city of Karachi and is under interrogation — a major victory against the insurgents battling U.S. troops in neighboring Afghanistan.

The capture of Mullah Abdul Ghani Baradar was carried out jointly by the CIA and Pakistan's Inter-Services Intelligence, officials said Tuesday.

Baradar, the most senior Afghan Taliban leader arrested since the U.S.-led war in Afghanistan began in 2001, is considered second only to founder Mullah Mohammad Omar in the Taliban hierarchy. He is also believed to be a close associate of Osama bin Laden's.

One Pakistani officer said Baradar was arrested 10 days ago in the seaport city and "was talking" to his interrogators.

NPR's Julie McCarthy says Baradar is a potential "treasure-trove" of information about the Afghan Taliban. She says authorities have been questioning him for days and that he has been asked, among other things, about the whereabouts of bin Laden and Mullah Omar.

Baradar's capture is a significant success for the Obama administration, which has vowed to kill or seize Taliban and al-Qaida leaders in Afghanistan and Pakistan. It also signals a new level of cooperation between the U.S. and Pakistan, which has been accused of allowing the Afghan Taliban to operate with impunity. Baradar's capture follows an increase in attacks by U.S. Predator drones that have reportedly killed many midlevel Taliban commanders.

A Taliban spokesman in Afghanistan said Baradar was still free, though he did not provide any evidence.

"We totally deny this rumor. He has not been arrested," Zabiullah Mujahid told The Associated Press by telephone. He said the report was Western propaganda aimed at undercutting the Taliban as they try to repel a NATO offensive in the stronghold of Marjah in southern Afghanistan.

Baradar was the deputy defense minister in the Taliban regime that ruled Afghanistan until it was ousted eight years ago. He was appointed to the No. 2 position in the insurgency after the death of military chief Mullah Akhtar Mohammed Usmani in 2006. Baradar is known to coordinate the group's military operations throughout the south and southwest of Afghanistan, and his area of direct responsibility stretches over Kandahar, Helmand, Nimroz, Zabul and Uruzgan provinces.

There was also speculation that the arrest could be related in some way to a new push by the United States and its NATO allies to negotiate with moderate Afghan Taliban leaders as a way to end the war in Afghanistan. Pakistan has an important role in that process because of its close links with members of the movement, which it supported before the terrorist attacks of Sept. 11, 2001.

Karachi is Pakistan's largest city and has been increasingly cited as a possible hiding place for top Afghan Taliban commanders in recent months. It has a large population of Pashtuns, the ethnic group that makes up the Taliban, but it is on the Arabian Sea and far from the Afghan border.

Word of Baradar's capture came as U.S. Marine and Afghan units pressed deeper into Marjah, facing sporadic rocket and mortar fire as they moved through suspected insurgent neighborhoods in the NATO offensive to reclaim the town.

After denying for years that Afghan Taliban were based in the country, the Pakistani government and security agencies had little reason to publicize the arrest of Baradar, which was first reported by The New York Times.

Pakistani Interior Minister Rehman Malik said authorities had arrested a "number of people who are running away from Afghanistan and coming to Pakistan," but he would not confirm the Baradar's capture.

The Times said it learned of the CIA-Pakistani operation last Thursday but delayed reporting it at the request of White House officials who said that publicizing it would end a valuable intelligence-gathering effort by making Baradar's associates aware of his capture. The newspaper said it decided to publish the news after White House officials acknowledged that the arrest was becoming widely known in the region.