Accessibility links
Hockey Puck Test Helps Detect Concussions Brain specialists and sports doctors are worrying more about the long-term effects of concussions, especially because millions of kids engage in sports that put them at risk of repeated head injury. Researchers are trying to devise simple ways to determine whether a person has a concussion. One test involves a hockey puck on the end of stick. 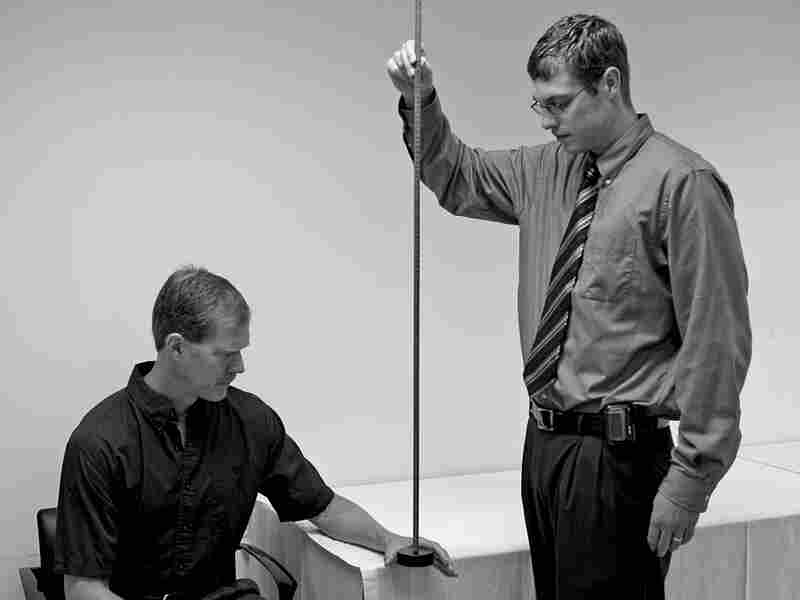 Dr. James Eckner tests the reaction time of one of the study's authors, Dr. James Richardson, using the method they developed. The stick is marked in centimeters and weighted down by a hockey puck. University of Michigan hide caption 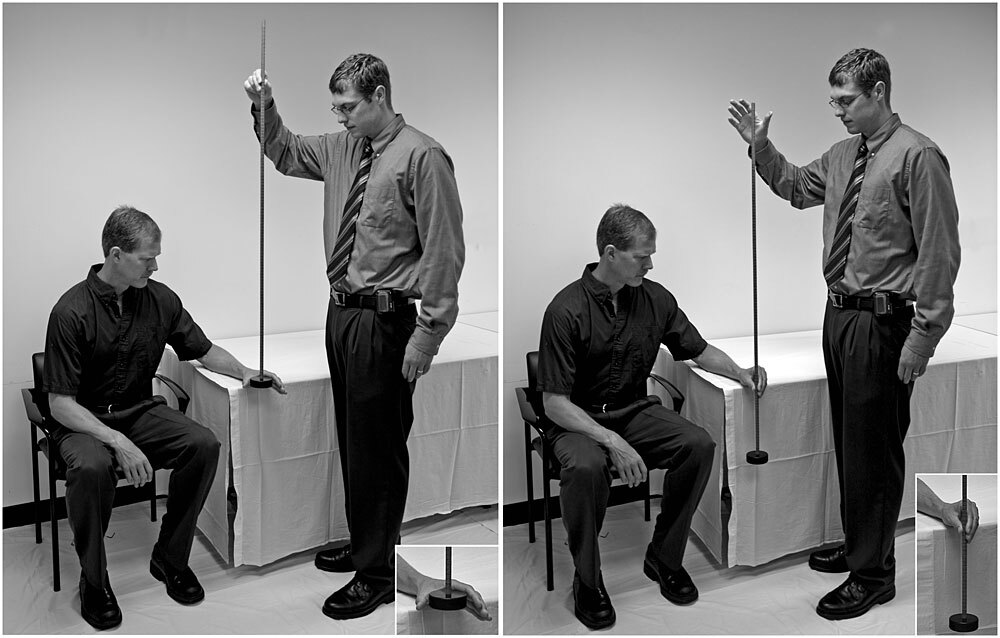 Dr. James Eckner tests the reaction time of one of the study's authors, Dr. James Richardson, using the method they developed. The stick is marked in centimeters and weighted down by a hockey puck.

Concussions from a bump on the head used to be no big deal.

"People just kind of said 'oh, that athlete got his bell rung' and didn't think much of it," says Dr. James Eckner of the University of Michigan's medical school.

That was then. Now experts worry about the cumulative damage from "mild" brain injury, especially among young athletes.

"We know the developing brain really needs time to do just that — develop," says Dr. Anthony Alessi, a Connecticut neurologist active in the American Academy of Neurology's sports section. "So any repeated head injury becomes an issue of concern."

That puts a premium on figuring out when someone has had a concussion. It's not so easy. "Not everyone has the same symptoms or physical symptoms afterward," Eckner says.

The Michigan researcher and his colleagues have been working on a quick, simple test for one sign of concussion that may not be so subjective or variable: slowed reaction time.

Their test couldn't be simpler. It involves a hockey puck mounted on the end of a long stick. The stick has one-centimeter markings along its length. The suspected concussion victim sits with his forearm on a table and fingers loosely circling the stick while the tester holds it from the top.

The tester drops the stick without warning, and the person being tested catches it as quickly as he can. The place on the stick where he grabs it tells the tester how fast he reacted.

Eckner's group measured college athletes' reaction times at the beginning of the season. Later, when some of them had concussions, their reaction time on the test was 15 percent slower, on average.

"This isn't something you measure with a stopwatch," he says. The average difference between a person's baseline performance and the post-head-injury test result is only about 30 milliseconds.

The Michigan researchers will present their results this spring at a meeting of the American Academy of Neurology.

A Yardstick, Not A Diagnosis

But the hockey-puck-on-a-stick test isn't ready for widespread use. For one thing, the Michigan study only involved about 200 athletes (tested at the beginning of the season) and eight concussions (tested just after injury). Bigger numbers will be needed.

There are computer programs that test reaction times. But it's not so easy to do that on a playing field, and many school systems are strapped for cash and can't afford the licensing fees.

Eckner says his test has the advantage of being low-tech. "It's like a stethoscope compared to the echocardiogram," he says. "It doesn't give you quite as much information, but it's something you can put in your pocket and use very easily."

Even if it holds up, Alessi, the Connecticut neurologist, says it's never going to be a standalone test to diagnose or rule out a concussion. "We all want a simple, quick, easy test that's going to tell us exactly what to do, and that's just not the case," Alessi says.

There will always be a need for trained personnel to assess an athlete's signs and symptoms. But Alessi says the reaction-time test might help — especially when players conceal their symptoms so they can stay in the game.

The Importance Of Knowing

Once a young athlete has had a concussion, it's important to avoid another. That's a big reason for determining when someone has had one in the first place.

Dr. Frances Jensen, a neurologist at Children's Hospital in Boston, says she and her colleagues are much more attuned than they used to be to the implications of repeated concussions.

That's why, when she diagnosed 17-year-old Meaghan Garland last week with "post-concussion syndrome," Jensen stressed that Garland should think twice about going out for lacrosse this spring.

"If you're going to be taking a sport that might put you at risk for head injury, that would probably be not a great thing," Jensen told Garland.

Women's lacrosse is not exactly a contact sport. But Garland seemed to agree that it might not be such a good idea to risk getting hit in the head with a stick.