Accessibility links
UConn Women's Team Excels; Will America Notice? The University of Connecticut women's basketball team is on the verge of breaking its own record for consecutive wins. Still, commentator Frank Deford says the Huskies' remarkable achievements as a team are often overlooked, even as female athletes are getting more attention for their individual triumphs. 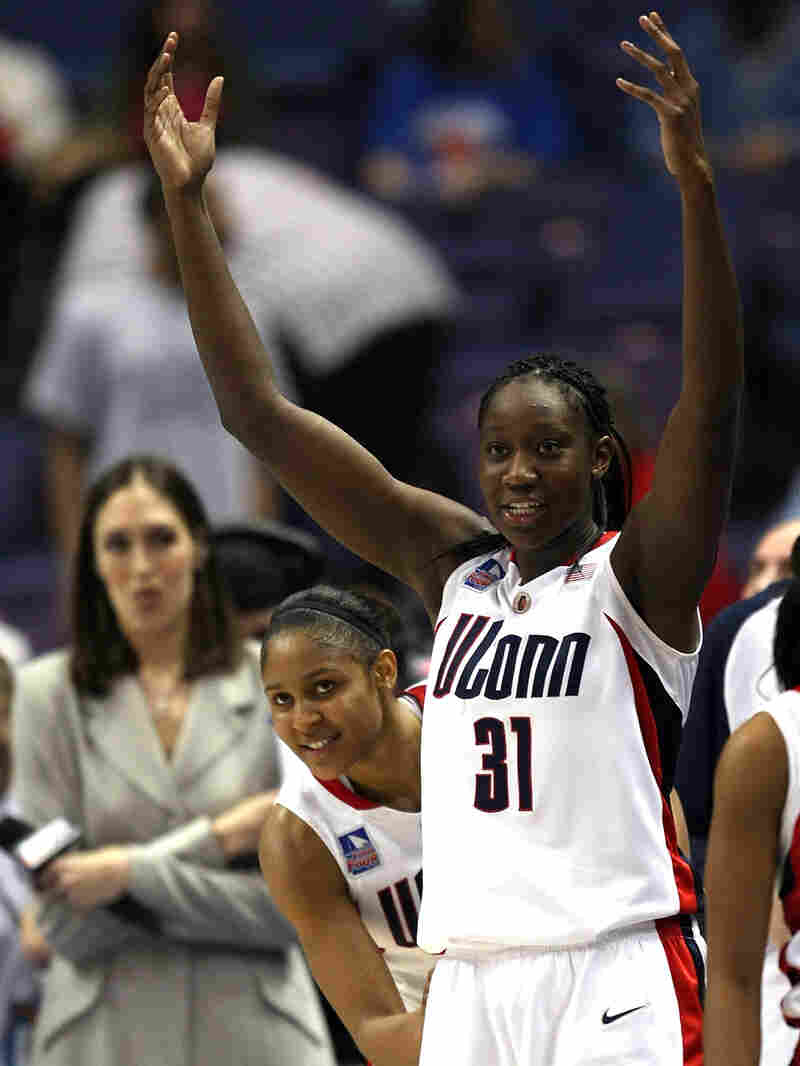 Maya Moore peeks around teammate Tina Charles as the Huskies celebrate at the 2009 Women's Final Four; former Connecticut star Rebecca Lobo looks on. The Huskies have been ranked No. 1 since Feb. 18, 2008. Elsa/Getty Images hide caption 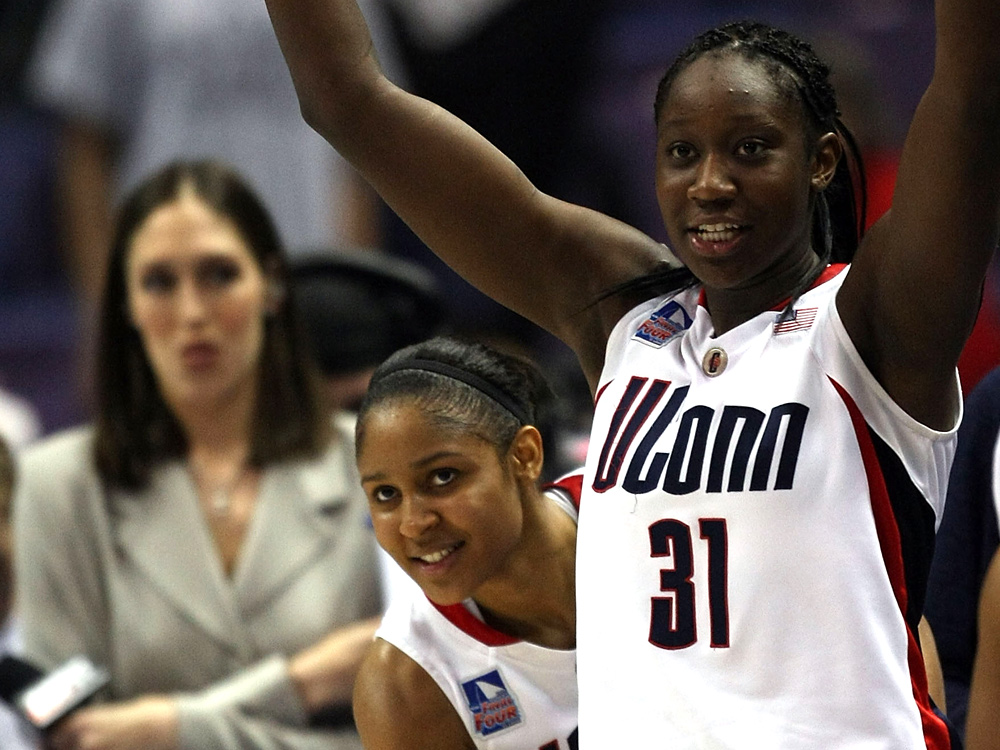 Maya Moore peeks around teammate Tina Charles as the Huskies celebrate at the 2009 Women's Final Four; former Connecticut star Rebecca Lobo looks on. The Huskies have been ranked No. 1 since Feb. 18, 2008.

Have women's sports ever been so much in the news? Lindsey Vonn was ordained the very face of the Olympics. Danica Patrick's incursion into NASCAR has been all the vroom-vroom of motor sports. A bowler named Kelly Kulick whipped all the men in the Tournament of Champions. Serena Williams' victory at the Australian Open matched the headlines given to Roger Federer.

But notice something unique about this exceptional focus on women athletes?

All of them are in individual sports. Although more and more American schoolgirls grow up playing team games, those sports just don't attract commensurate attention at any level. With women's team sports, there is still a glass grandstand.

All the more amazing that right now, the women's basketball team at the University of Connecticut may well be the most overwhelming power ever to dominate any major sport. But to most media, the Huskies are but a stealth bomber.

There is, significantly, a considerable emotional difference between team and individual sports because teams represent an entity — a school, a college, a city that we identify with.

Even now, we do not yet seem prepared to accept women's teams as our representatives. The only female group we ever truly embraced was the U.S. soccer team of 1999, but that was much more a case of nationality than gender — more like the celebration of the U.S. men's ice hockey squad of 1980. Few women's teams draw crowds. Certainly women themselves do not seem wired to support their gals as men the world over cheer on their guys.

And here's the ultimate insult: While Las Vegas will take bets on almost any game men suit up for, only at NCAA tournament time can you bet the women's game. Then, ironically, almost no women bet — just hard-core male gamblers. You may not like gambling, but the sports that fans can bet get the most attention — and with it, certification.

Ladies, to help your athletic sisters, you have got to descend on Las Vegas and demand the right to lose good money betting on games, just as men have forever.

Meanwhile, UConn remains in a league of its own. It's won 65 games in a row — and, incredibly, all 65 by double digits. In Maya Moore and Tina Charles, it may very well have the two best players in college. When has that been the case, in any sport, ever?

There are a lot of reasons why girls from all over the country decide to go play their college basketball in a chilly little backwater called Storrs, Conn. — but a prime one is simply that UConn women's basketball is popular.

The home games bang out. The glass grandstand has been smashed there. The players are celebrities. They are treated, well, like men.

But UConn remains the prime exception. Even as more and more women participate in sports, not enough of us, either sex, seem to want to watch — to care — when women play in teams.