Accessibility links
'The Ghost Writer': Roman Polanski, At The Height Of His Powers Roman Polanski's deliciously unsettling new film, The Ghost Writer, is a dark pearl of a movie, made with the flair and precision of a director suddenly returned to the height of his powers. Kenneth Turan says it could spark a creative renaissance for the controversial filmmaker. 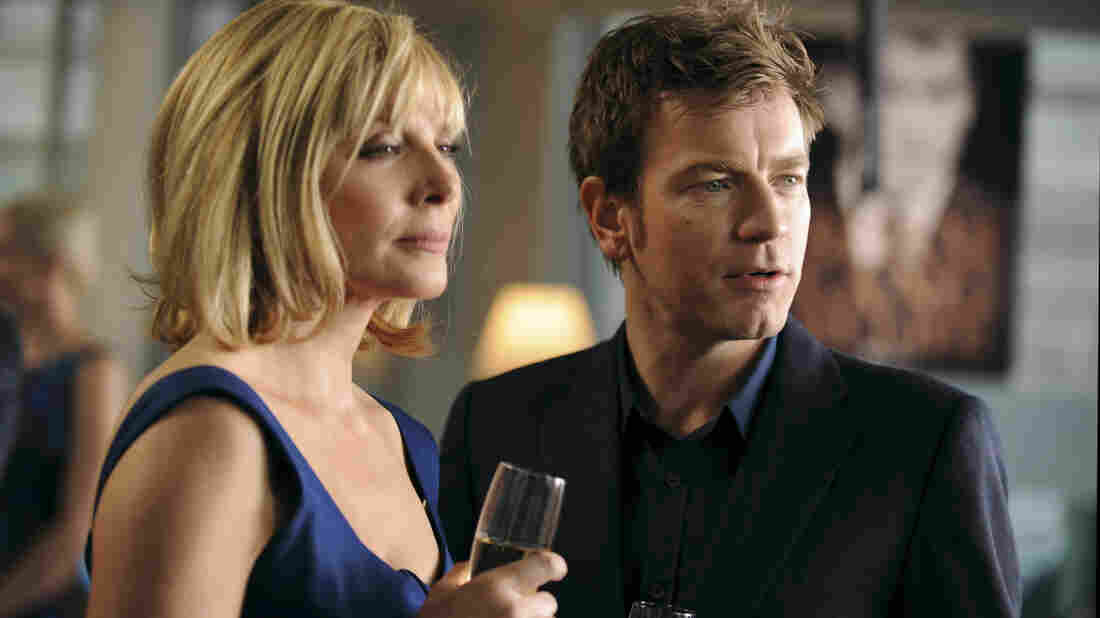 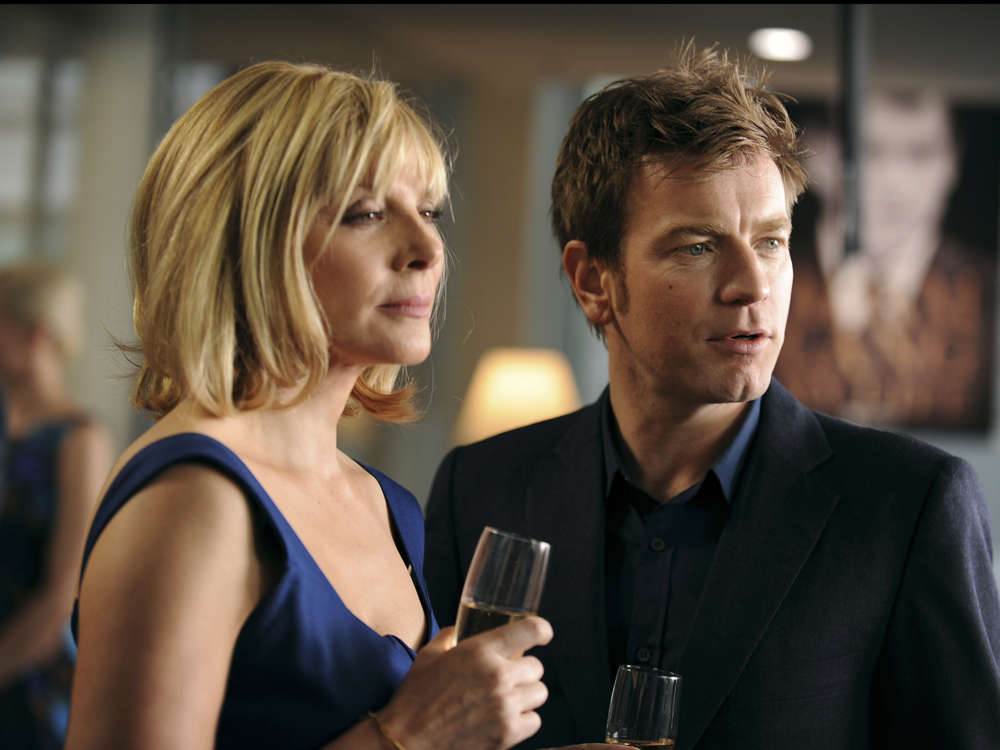 Roman Polanski's new film, the deliciously unsettling The Ghost Writer, is a dark pearl of a movie, made with the flair and precision of a director suddenly restored to the height of his powers.

The film starts quietly, with Ewan McGregor playing an unnamed ghost writer whose agent persuades him to pump up the memoirs of a former British prime minister, a character modeled after Tony Blair.

No director is better than Polanski at creating an across-the-board mood of nagging unease — a sense of nefarious doings just outside our line of sight. No sooner does the ghost writer sign on than the other shoe drops: The prime minister, smoothly played by Pierce Brosnan, is accused of ordering the kidnapping of suspected terrorists and handing them over to the CIA for torture, a charge that could bring prosecution for war crimes. What, the ghost writer wonders, has his agent gotten him into?

As for Polanski, what he's gotten us into is impeccable entertainment. This film is a thriller, wrapped around a roman a clef about contemporary politics, wrapped around Polanski's eternal cynicism about the fate of individuals faced with the entrenched strength of the powerful. The director blends personal preoccupations with audience preferences as effortlessly as Alfred Hitchcock did.

McGregor is excellent as the Ghost With No Name. It's a tricky role, which demands that he hold our interest as a decent and capable everyman while allowing for him to be gullible enough to get caught up in the powerful undertow of forces beyond his control.

It's especially heartening to see 94-year-old Eli Wallach bring the same kind of brio to a small part here as he brought to Mystic River back in 2003. That film helped spark a directing renaissance for Clint Eastwood, and with any kind of luck, The Ghost Writer just might signal a new beginning for Polanski, as well. 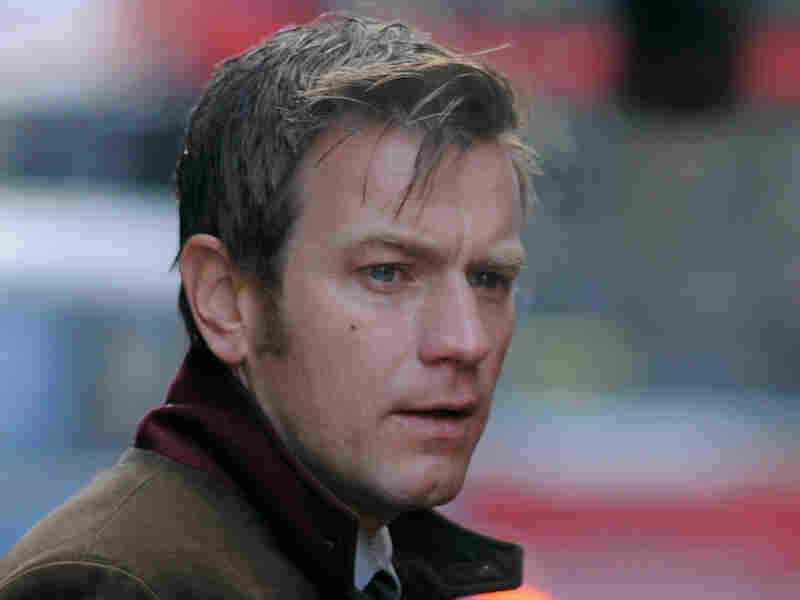 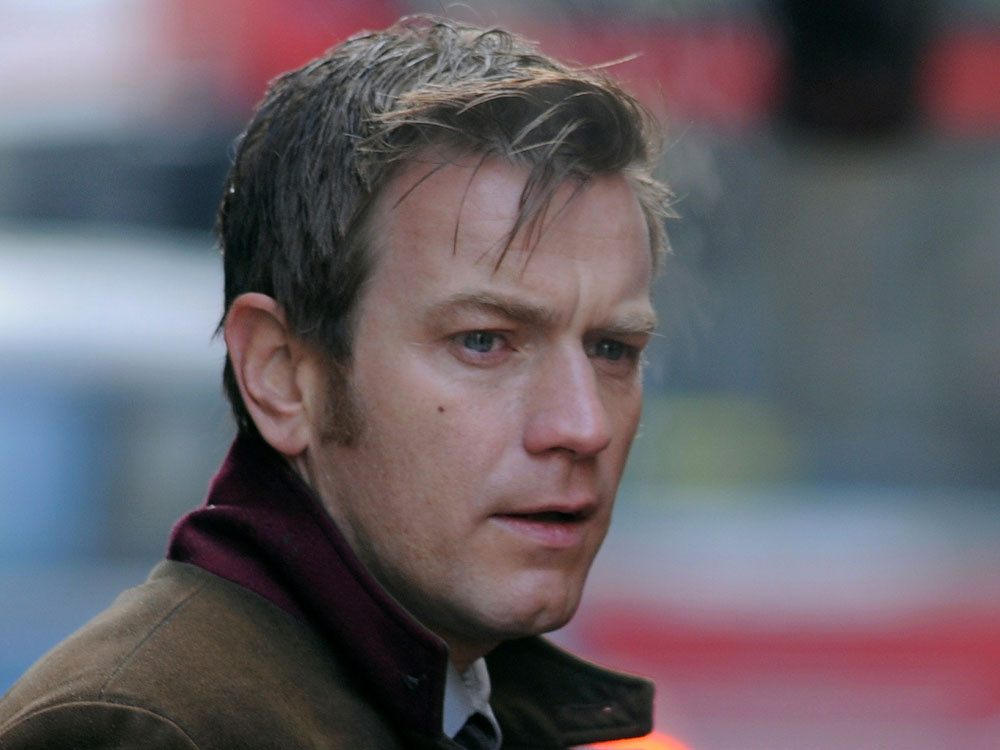 In The Ghost Writer, Ewan McGregor plays a ghostwriter who attempts to discover the truth about Britain's former prime minister.

Ewan McGregor enjoys quirky writing and eclectic roles. The Scottish actor has played a number of different characters over the past decade, in films ranging from small British indies to international blockbusters.

McGregor tells Dave Davies that he knew he wanted to be an actor from a very young age, after hearing stories from his uncle, the actor Denis Lawson.

His breakthrough came in 1996 when he played a heroin addict in the film Trainspotting. To prepare for the role, McGregor says, he spent time with former heroin addicts who taught him how to hold a needle and portray withdrawal symptoms accurately.

McGregor also played a young Obi-Wan Kenobi in the second Star Wars trilogy. Ironically, his uncle — who had a bit role in the original Star Wars — advised him not to take the role, fearing McGregor would be typecast.

Since taking the role in Star Wars, McGregor has kept his resume diverse, playing a poet, an official of the papal court, and the male romantic lead in the musical Moulin Rouge, where he performed his own singing.

In his latest film, Roman Polanski's The Ghost Writer, McGregor plays an unnamed writer working on the memoirs of a former British prime minister, who is under investigation for committing war crimes.

McGregor says he enjoyed working with the "master filmmaker" on the thriller. "As a director, he was pushing us to look for the truth of a scene," he says.

On Working With Roman Polanski In The Ghost Writer:

"There wasn't any air of controversy of working with him on set. His case and his situation has nothing to do with me. I wasn't involved in any of that. I didn't discuss any of that with him. I worked with him purely as an actor wanting to work with a master filmmaker, and he's one of the greatest living filmmakers, so I was happy to be his actor."

On Learning To Play A Heroin Addict In Trainspotting:

"We had a man called Eamonn who was our on-set adviser. Whenever there were any drug-taking scenes or heroin scenes, then he was there, and we were able to make sure what we were doing with the syringes and the spoons and the matches was accurate. And also, I needed to find out what it was like to overdose and to withdraw from heroin addiction — because there's quite a long sequence where my character is going through withdrawal, which is a horrendous and painful process — and I was able to question him about all of those things in great detail because he had lived that life and was no longer living that life."

On Playing Obi-Wan Kenobi In The Second Star Wars Trilogy:

"When I got closer and closer to being cast as Obi-Wan Kenobi, I did question whether it was the right thing for me. Up until that point, I'd been involved in mainly low-budget independent films ... and I felt like being part of the [indie British filmmaking] team was my identity as an actor ... I didn't think that 'Star Wars' was quite who I was or what I was about. However, the closer I got, the more I wanted to do it ... I'm very happy with the work I did in 'Star Wars' ... I've always been quite open with the fact that they were technically quite difficult to make. There's a lot of green screen and blue screen, and for the actor, there's very often not another actor to act with — so you were playing to a tennis ball on a stick or a piece of tape on a green curtain, and that's just not easy. That becomes a very technical exercise."

On Doing Full-Frontal Nudity In Many Of His Films:

"Movies reflect life, and in life you're naked some of the time. And movies are about the dramatic side of life — and sex and sexuality and love and romance are definitely in that area of drama. So I think it's obvious that if you're going to have a career in acting, you're going to be called upon at some point to explore those areas."