Accessibility links
Vintage Highlife and Afrobeat on 'Bokoor Beats' In Ghana, the '70s was a time of political repression, high inflation, and funky pop music. A young British emigre named John Collins formed the Bokoor Band with locals in 1971. The Bokoor Beats retrospective captures a band full of pride and confidence from Ghana's then-recent independence. 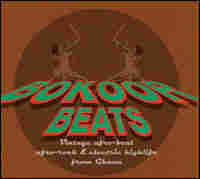 The Bokoor Band drew on Ghana's sunny "highlife" style, funky Afrobeat from neighboring Nigeria, and even the Latin-tinged soukous sound shimmying out of the Congo. hide caption

In Ghana, the '70s was a time of political repression, high inflation, and funky pop music. Among the musicians working the clubs in the Ghanaian capital, Accra, was a young British emigre named John Collins. Collins played guitar and harmonica, and even sang and composed with local bands. Later on, he became an important music producer in Ghana, where he still lives today. On Bokoor Beats, he compiles some of his favorite songs from his early days on the Accra scene.

Bokoor means "coolness," and when Collins co-founded the Bokoor Band in Ghana in 1971, they covered Jimi Hendrix, Carlos Santana and James Brown. When the group hit its stride a few years later, the Bokoor Band had folded those influences into original songs. They drew on Ghana's sunny "highlife" style, the funky, politically-edged Afrobeat from neighboring Nigeria, and even the Latin-tinged soukous sound shimmying out of the Congo.

Afrobeat was forged and immortalized 30 years ago by the late Fela Kuti. You might think of it as an Africanized hybrid of American funk and jazz. No surprise that Collins and his Ghanaian contemporaries went crazy for the sound. Collins' Bokoor Band contributes eight of the twelve tracks on Bokoor Beats, but it is their Afrobeat numbers that really cut to the bone.

American music — especially R&B, rap, and hip-hop — continues to exert massive influence on African pop music. If you turn on the radio in Accra today, you are likely to hear the contemporary "hiplife" style, a Ghanaian fusion of "highlife" and hip-hop. Hiplife certainly has its appeal, but the music on Bokoor Beats feels deeper. The pride and confidence of independence — which Ghana won in 1957 — still dominates. These bands are certainly plugged into the world, but their sound forcefully puts Africa in the mix.

There is no turning back the clock on music, any more than on history itself. Thankfully, there are retrospective CDs like Bokoor Beats, a brand of nostalgia that is easy to share, even if you did not live it the first time around.