Accessibility links
Iran's Opposition Falters After State Stifles Protests Last week, on the anniversary of the Islamic revolution, Iranian police managed to largely suppress opposition demonstrations in the streets of Tehran. Experts wonder how a divided opposition movement will survive under a government growing better at squelching public dissent. 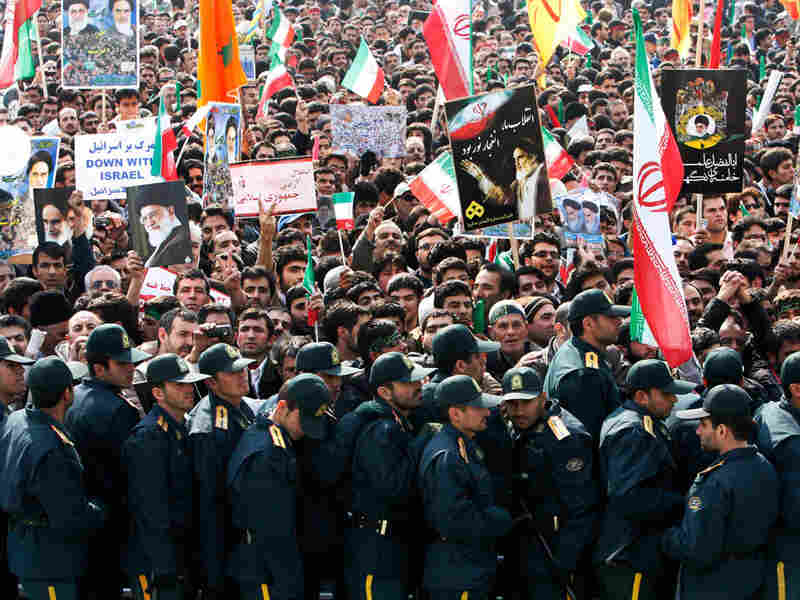 Police officers stand guard at a pro-government rally on Feb. 11 commemorating the anniversary of the 1979 Islamic revolution. Foreign media were banned from covering the opposition protests. Vahid Salemi/AP hide caption 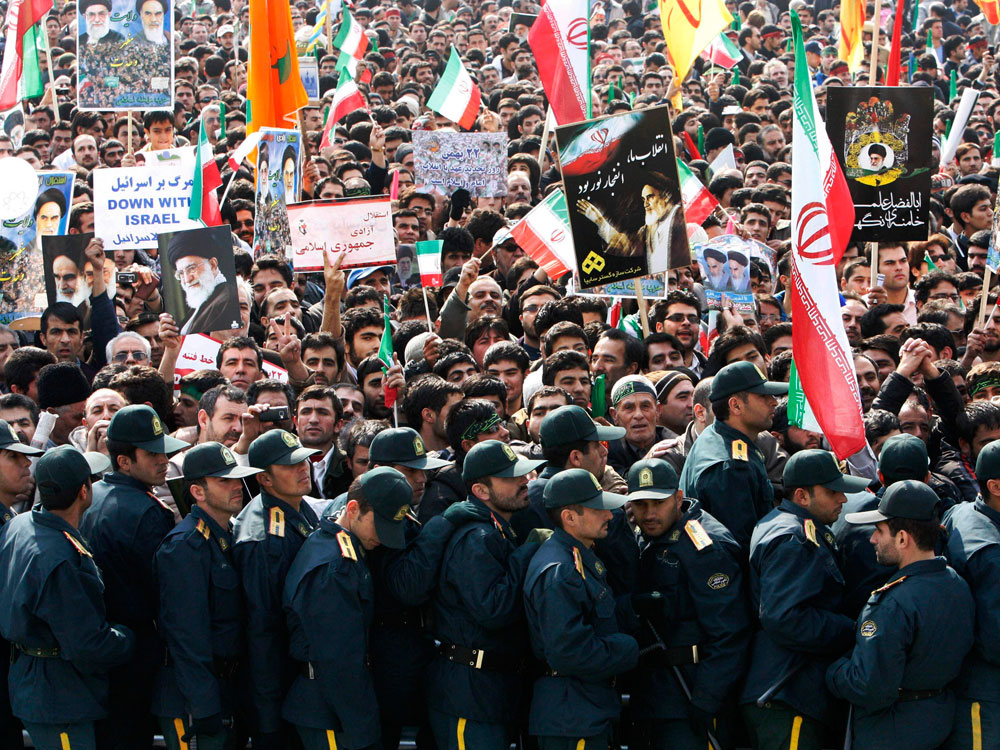 Police officers stand guard at a pro-government rally on Feb. 11 commemorating the anniversary of the 1979 Islamic revolution. Foreign media were banned from covering the opposition protests.

It has been a week since Iran's opposition tried and failed to mount huge demonstrations to mark the anniversary of the Islamic revolution. On Feb. 11, Iran's government managed for the most part to prevent the opposition from getting out into the streets to protest.

The opposition hoped to bring thousands into Tehran and other Iranian cities to challenge the legitimacy of President Mahmoud Ahmadinejad's government, as they had done periodically since last June's disputed presidential election.

Instead, the government deployed thousands of police and street militia throughout Tehran, effectively stifling the opposition. Since then, Iranians inside the country and out have been debating the opposition's future.

Simply put, no one knows what's next for them.

"To my mind, the government mastered its narrative," says Ali Ansari, an expert on Iran at the University of St. Andrews in Scotland. "It ruthlessly went after anyone trying to do anything alternative. It got its message out. It very much controlled the airwaves. It controlled the journalists. You get the impression that certainly on a propaganda level, the government was back in charge."

On one level, perhaps that shouldn't be surprising. Iran's government has had the capability to bring enormous pressure to bear on street protesters. It has the power of the security forces, and it can also disrupt the ability of the opposition to communicate by shutting down the Internet and cell phone communications.

The only real surprise is that it took this long for the government to formulate a well-organized response to street demonstrations.

One key weakness of the opposition known as the Green Movement is its amorphous nature, many analysts say. First and foremost, it lacks real leadership, says Haleh Esfandiari, an Iranian-American scholar who was jailed by Iran three years ago.

"On the 11th of February, there was no leadership," Esfandiari said recently on the BBC's program Hardtalk. "People were just told, the opposition was told, come out. But usually you need a leadership."

Iran's government has effectively isolated those nominally leading the opposition, such as Mir Hossein Mousavi and Mehdi Karroubi, both candidates in last June's presidential election.

And even this nominal leadership, Esfandiari said, has been unable to coalesce around common political goals.

At the same time, there are some in the Green Movement who remain committed to Iran's Constitution and the power of the mosque embodied by the office of the Supreme Leader.

These differences have been exploited by Iran's government, especially by Ahmadinejad, with his focus on the nuclear issue, Ansari says.

"I think he's trying to make sure that the nuclear issue becomes the single most important issue that everyone's discussing," Ansari says. "It will help silence critics at home. It'll be a major international crisis. You're ratcheting up the confrontation. And, you know, even the opposition at home will have to, in some ways, almost be forced to toe the line. I mean, I think this is basically, it's been his strategy for the last four years in actual fact."

The opposition is there to stay ... And it is going to try and wear down the government.

The Obama administration in the past month has concentrated on Iran's nuclear pursuits. On her recent swing through the Persian Gulf, Secretary of State Hillary Clinton used unusually blunt language to describe Iran, asserting that the country is pursuing a nuclear weapon even as it slides toward military dictatorship.

"Iranian officials have refused every offer to meet on its nuclear program," Clinton said. "So these actions understandably have caused us to wonder: What does Iran have to hide?"

The rhetoric coming from Israel's Prime Minister Benjamin Netanyahu has been even blunter.

"I believe that what is required right now is tough action from the international community," Netanyahu says. "This means crippling sanctions, and these sanctions must be applied right now."

But if it has been the goal of those in power in Tehran to focus international attention exclusively on the nuclear controversy, it may lead Iran's leaders to think they've now mastered the situation, Ansari says.

"This is very classically a case of the Ahmadinejad government — is it may make them overconfident yet again," Ansari says. "And I have no doubt that the Green Movement, while bloodied, is certainly not out."

Ahmadinejad certainly sounded cocky this week in a news conference he held in Tehran, where he said, in effect, that if more sanctions are coming, bring them on.

But despite the recent setback, the opposition has not been defeated, Esfandiari said. Now it has become a long-term grind.

"The opposition is there to stay," Esfandiari said. "This is not an opposition which will disappear. It is going to stay there. And it is going to try and wear down the government."

How it will do that, however, is not entirely clear.