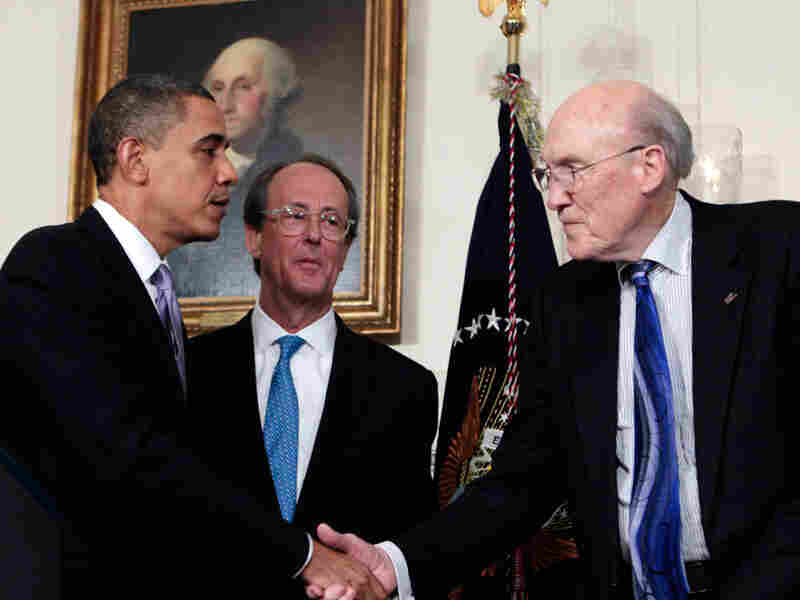 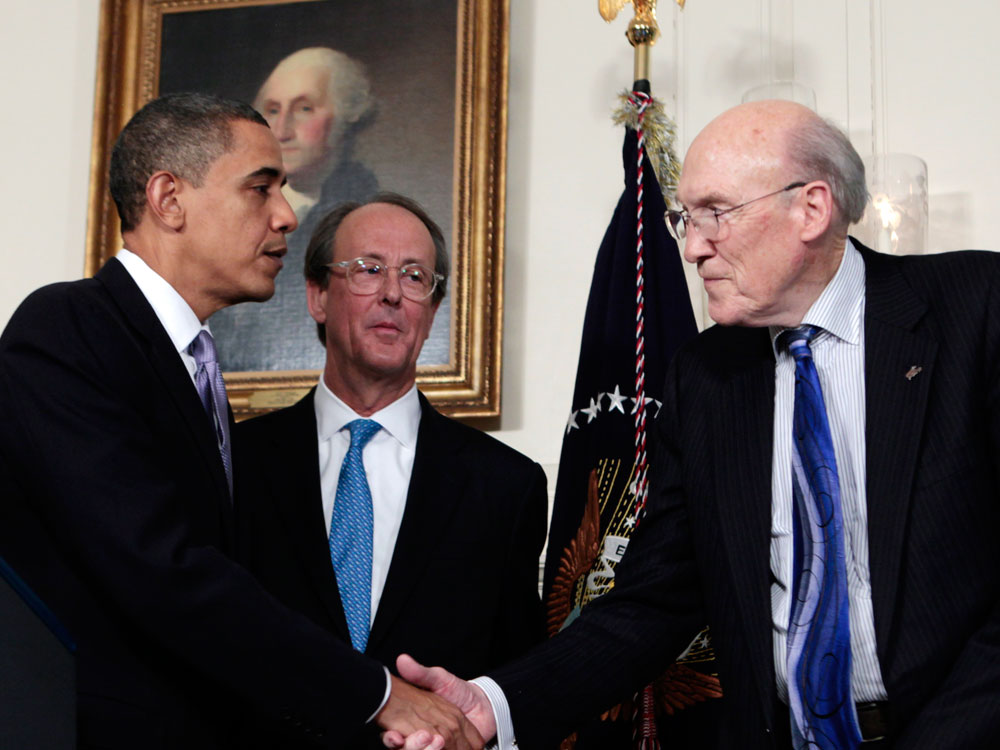 "The great thing the president has told us [is that] everything's on the table," said Erskine Bowles, President Clinton's former chief of staff. "If we don't do something about it [the deficit], it will gobble this budget up."

Bowles and former Sen. Alan Simpson told NPR's Melissa Block that they will consider cutting beloved entitlement programs — including Medicaid, Medicare and Social Security — and all other measures as they take over the leadership of the National Commission on Fiscal Responsibility and Reform, a bipartisan panel charged with finding ways to lower the deficit.

Heard On All Things Considered

Panel Co-Chair: All Options On Table To Cut Deficit

Panel Co-Chair: All Options On Table To Cut Deficit

Simpson, a Republican from Wyoming, had a blunt message for anyone who would stand in the way of the commission's work: "Get onboard, or forget your own grandchildren."

He said he is puzzled about why seven Republican lawmakers turned against a bill that would have created a deficit-busting commission after initially supporting the idea, but he believes the Republican leadership will appoint lawmakers to the commission who support the effort.

"I think Mitch McConnell and John Boehner — who I know quite well — will appoint people to this commission that will work and hopefully realize that the country is bigger than the politics," Simpson said, citing the Republicans who serve as the minority leaders of the Senate and the House.

President Obama signed an executive order creating the bipartisan commission, saying his long-term effort is aimed at "freeing our future from the stranglehold of debt."

"For far too long, Washington has avoided the tough choices necessary to solve our fiscal problems, and they won't be solved overnight," Obama said. "But under the leadership of Erskine and Alan, I'm confident that the commission I'm establishing today will build a bipartisan consensus to put America on the path toward fiscal reform and responsibility."

The White House projects that the deficit will reach a record $1.56 trillion by the time the current fiscal year ends on Sept. 30. The commission is charged with suggesting steps to trim the deficit to a manageable 3 percent of gross domestic product by 2015; it is currently projected to be 10.6 percent.

On Wednesday, the Treasury Department reported that the federal deficit for January rang in at $42.63 billion, bringing the total this budget year to $430.69 billion — 8.8 percent higher than last year.

The enormous shortfall has been years in the making, pushed steadily upward by the growing costs of government programs such as Medicare, Medicaid and Social Security; the cost of the wars in Iraq and Afghanistan; the declines in tax revenues due to the recession — and even the huge spending packages passed to get the economy going again.

Obama acknowledged Wednesday that it wasn't an easy decision to pass the $787 billion stimulus program in the face of the nation's "massive deficit." Still, he praised the year-old program, saying it helped 2 million Americans keep their jobs and prevented a second Great Depression.

Under the guidance of Simpson and Bowles, the commission is expected to have a raft of recommendations for the president by December.

Simpson, 78, represented Wyoming in the U.S. Senate from 1979 to 1997. His stellar reputation propelled him into the post of Republican whip, but he is known for being independent and working on a bipartisan level. In recent years, he has taught at the Harvard Kennedy School of Government and served on the bipartisan Iraq Study Group.

Bowles, 64, president of the University of North Carolina system, announced several days ago that he would be leaving. He was appointed by President Clinton to serve as director of the Small Business Administration in 1993. Later, as White House chief of staff, he helped broker a deal with Republican leaders that led to budget surpluses in the late 1990s.

The 18-member deficit panel, called the National Commission on Fiscal Responsibility and Reform, will consist of 12 members of Congress who are selected by the leadership of each party. The other six members will be appointed by Obama, with no more than four from a single party.