Accessibility links
Colorado State University Embroiled In Concealed Carry Dispute After the 2007 Virginia Tech shootings, lawmakers across the country re-examined concealed-carry laws on campuses. Colorado State University is one of the few schools to continue to allow concealed weapons. Despite protests from some students, the school's directors might be about to change that. 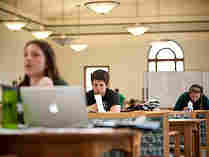 Across the U.S., most public universities ban students and faculty from carrying concealed handguns on campus. Colorado State University has, up until now, been one of the few exceptions to this rule. But now, campus leadership wants to change the policy, and that's not sitting well with students and local gun rights advocates.

The university's board of directors voted to pass a ban on carrying concealed weapons last year. At a news conference on the Fort Collins campus earlier this month, Terry Tyan, of the advocacy group Rocky Mountain Gun Owners, says the ban — which has yet to be finalized — would violate Colorado's concealed-carry law. She says that if the university continues to try to ban firearms, the school would be answered with a lawsuit.

The region's county sheriff, Jim Alderden, says if the CSU policy is put into place, he will not jail anyone found guilty of violating it.

"What CSU is trying to pass is a policy," Alderden says. "And their position is that the university policy trumps state law and the U.S. Constitution."

Alderden says school policy should not trump state law. But under Colorado law, campuses do have the authority to implement weapons control policies. And the university's spokesman, Brad Bohlander, says that most other campuses in the state already have these policies.

But Bohlander says the ban won't go into place until a specific university policy is approved. So far, CSU officials have been pouring through public comment on a draft of the plan.

Personally, I think that no public institution has a right to infringe on our rights, which allows us to carry these guns.

Colorado's state laws complicate the issue: Right now, state statute does not specifically address handguns on college campuses. Since the 2007 Virginia Tech shootings, vague legal language has been a source of debate in other states, too. According to the National Conference of State Legislatures (NCSL), lawmakers have introduced 56 bills in the past three years aimed at specifically addressing concealed-carry laws on college campuses — either allowing or restricting carry.

But in recent years, only one state has passed a law addressing the issue.

"While there's a lot of talk about it, it doesn't seem like legislators are willing to move these bills along very far," says Vincent Badolato, a policy analyst with the NCSL.

In 2004, Utah began allowing faculty and students to carry concealed weapons on all of its college campuses. But the national debate continues. Both sides point to research they say illustrates that their policy would create a safer campus environment.

Many Colorado State University students seem to oppose laws that restrict their rights to carry a concealed weapon.

"Personally, I think that no public institution has a right to infringe on our rights, which allows us to carry these guns," junior William Campbell says.

This is a viewpoint that students feel isn't being entirely heard by university leadership, says Kirsten Silveira, senior reporter with the school's newspaper, The Rocky Mountain Collegian.

The university's board of governors will meet later this month to review language on its concealed-carry ban. At that meeting, they could finalize the process or decide to spend more time drafting the policy.