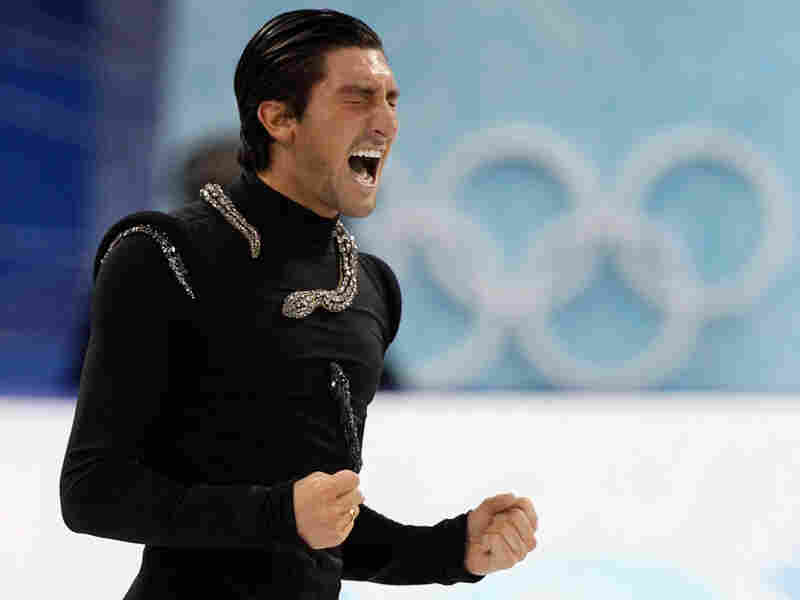 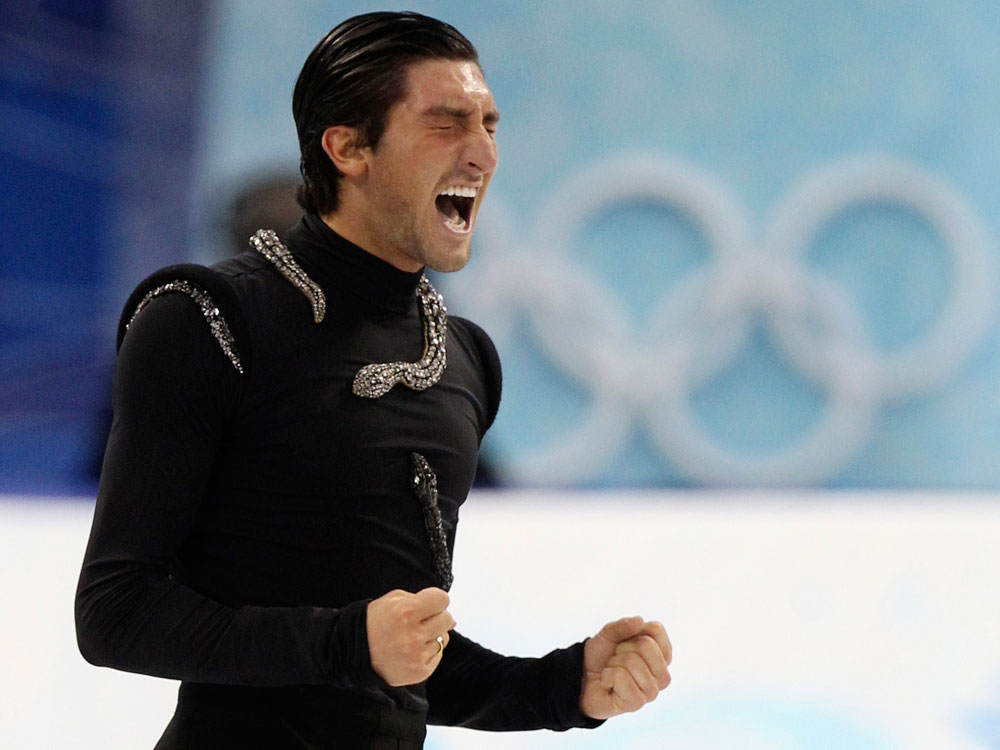 Evan Lysacek reacts after performing his free program during the men's figure skating competition at the Vancouver 2010 Olympics on Thursday.

There was plenty of drama Thursday night at the finals of men's figure skating at the Vancouver Winter Olympics. One skater's laces broke in the middle of his program. And American Johnny Weir performed exceptionally well and crowned himself with a wreath of roses while waiting for his score.

But the big story was the battle between the two top male figure skaters in the world — Russia's Evgeni Plushenko, the defending Olympic champion, and Evan Lysacek of the U.S. When it was over, there was a champion — and a rivalry rekindled.

They say it's hardest to skate last at a major competition like the Olympics. The pressure builds and builds. But Frank Carroll will tell you skating first isn't a piece of cake, either.

Carroll coaches Lysacek, who went first last night in the final group of skaters — the group that would win the medals. After Lysacek performed his 4 1/2-minute free skate wonderfully, his own waiting began. Carroll recounted what it was like as each successive skater went and didn't pass Lysacek in the standings. 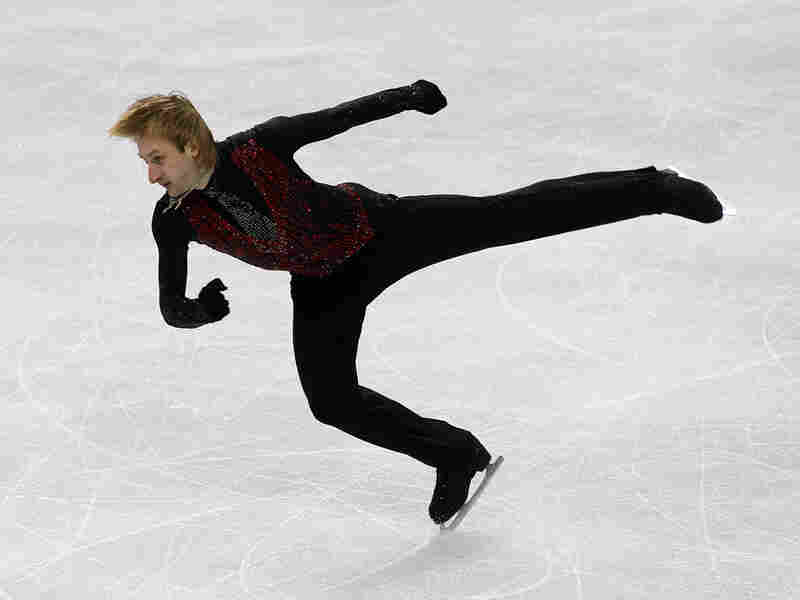 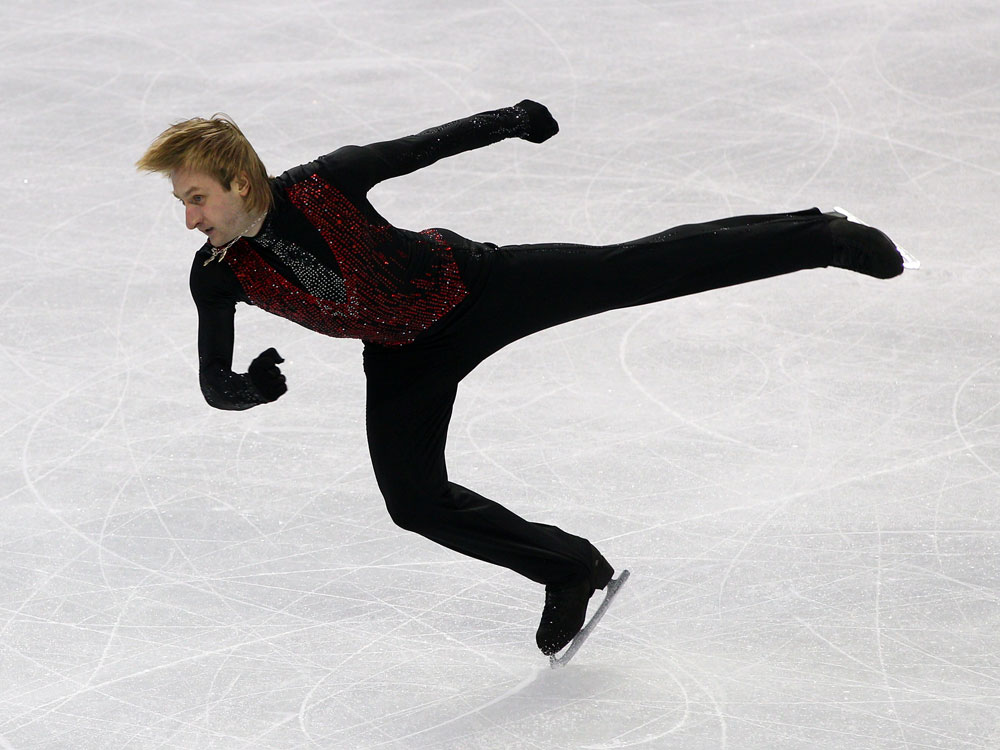 Evgeni Plushenko of Russia competes in the men's free skate on Day 7 of the Vancouver games. Plushenko took silver in men's figure skating.

"When it got to a certain point I said well, you've just earned a bronze medal," Carroll said. "And then [when the] next skater was through I said, well you've earned a silver medal. And I said, now this is going to be the longest 4 1/2 minutes of your life."

As Plushenko began his 4 1/2-minute free skate, the last program of the evening, reporters watching inside Vancouver's Pacific Coliseum undoubtedly were crafting scripts that went something like, "The king, Plushenko, did it again." Or, "Repeat gold medal winner. The line of Russian Olympic figure skating champions at every Olympics since 1992 remains unbroken."

Plushenko did nothing to discourage the scribes when he nailed his opening four-revolution quad jump. But as the program wore on, the king started looking more like a prince, wobbling on some of his jump landings, his spins and footwork less than stellar.

Ever the showman, Plushenko tried to flirt his way out of trouble. He waggled his hips to his music selection, "Tango Amore," and when he finished he blew a kiss directly at the judges — who played hard to get.

"He has earned 165.51 points," an announcer read. "His total competition score is 256.36 points. Evgeni Plushenko is currently in second place."

First In More Than 20 Years 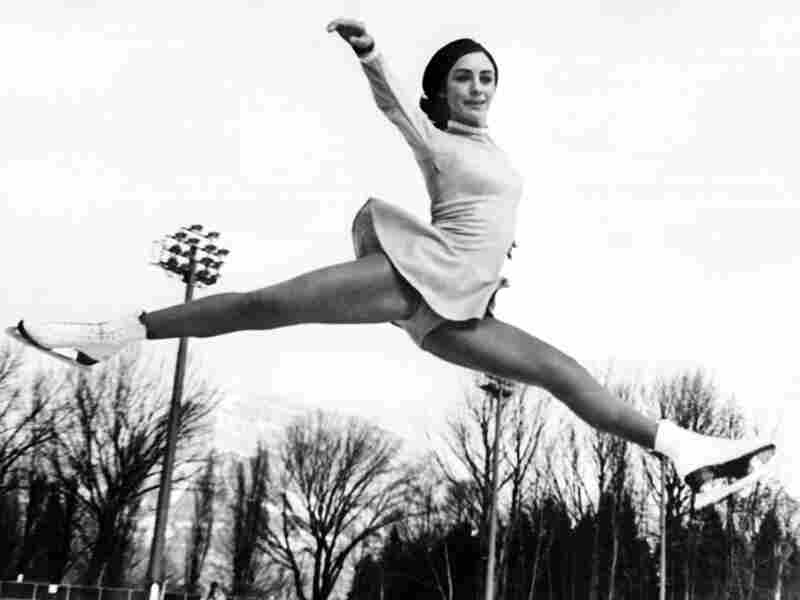 From Peggy Fleming (above) to Johnny Weir, figure skaters' costumes have been the source of both admiration and ridicule. Click below for a look back. AFP/Getty Images hide caption

And so Lysacek, a fourth-place finisher at the Olympics four years ago, became the first American male figure skater to win the gold medal since Brian Boitano did it in 1988.

Lysacek accomplished it with a technically brilliant performance, controlled jumps and nearly perfect spins. It was, he says, the result of his constant and sometimes maddening labor in the basics.

"I'm so grateful because I resisted so many times and said, 'Why am I working on such simple moves?' " Lysacek says. "I can do a loop already; I can do a choctaw [turn] already. And my coaches and choreographers said, 'Do it again.' And even in practice here I kept getting frustrated — I want to work on jumps more, and they were having me work on those turns. And tonight my focus was getting every point out of that program I could."

Lysacek's victory was one in the win column for the complete skater over the jumper — at least, for one night. The quad, of which Plushenko is a master, has become a new flash point in men's figure skating.

And do you need the quad to win? It can be a powerful weapon. But if it backfires, as it did with almost all the skaters who tried it last night, you get penalized. Lysacek won without a quad, an irksome fact for dethroned champion Plushenko.

"I think we need to change the system, the judging system," Plushenko says. "Because quad is quad." He reiterated that if the champion of the sport couldn't pull off a quad, perhaps it wasn't figure skating anymore, but "dancing" instead.

No progress, indeed. Underneath the stands of the Pacific Coliseum, it seemed like a step way back in Olympic history to those Cold War days that added so much spice to the games.

Post-event trash talking or the first shot of a new Cold War on ice? It remains to be seen. Because while these North American Winter Olympics have a new North American skating king, the next Winter Games, in 2014, are in Sochi, Russia.