Accessibility links
Why We Gain Weight As We Age It starts sometime during our 50s and 60s: that belly bulge, those "extra" pounds we just can't seem to shed. Part of it is simply the biology of our bodies. Our muscles literally shrink as we age, and that means more calories turn into fat — and it's a lot harder to exercise it off. But the good news is that working out still helps. 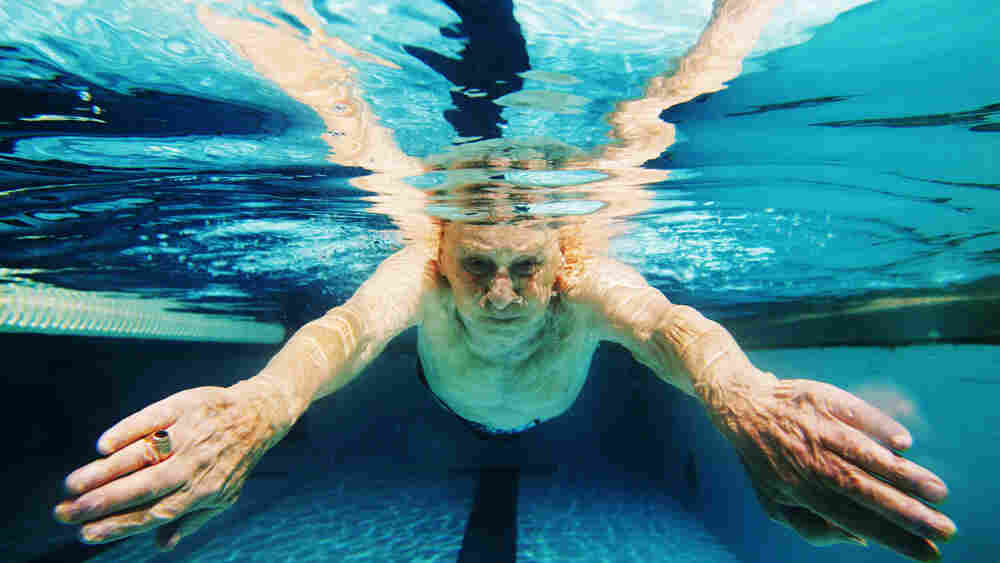 As we age, our muscles deteriorate, and they don't repair as quickly as they used to. But the good news is that exercise and weightlifting can still make muscles stronger. Al Bello/Getty Images hide caption

It's a pretty common lament, the idea that you just can't eat what you used to. But why is that so? And is it avoidable? There are a number of reasons why we put on the pounds as years go by, but take heart: There are ways to fight back — and win!

There are some particular biological changes that happen as we age. For one, aging muscles actually contribute to the increase in the amount of fat we store in our bodies, says Cheryl Phillips, president of the American Geriatrics Society.

"So, if you look at a woman who is 70 years old and compare her to what her body was like at 25 years of age, even though her weight may be exactly the same, she had more percentage of muscle in her body when she was 25 than she does when she's 70."

In large part, that's because we lose muscle cells as we age. When younger muscle cells get damaged, they're quickly repaired. That's not the case with older muscles, according to UCLA researcher and geriatrician Jonathan Wanagat. He says we don't know why muscles literally shrink as we age. But there are a number of theories.

"I think one of the ones that have become increasingly interesting and popular is the idea that the stem cells in the muscle are not able to respond to damage or to aging the way they did when we were younger," says Wanagat. And if damaged muscle cells aren't repaired, they sort of whittle away and die, he says. Decreases in growth hormone, testosterone and estrogen levels may also account for the loss of muscle fiber and the inability of tissue to replenish itself.

In addition, the muscle cells we're left with are sort of worn out, according to Phillips. "If you think of muscles as being the energy powerhouse of our body, that's where most of our calories are burned. And when we talk about metabolism, what we're really talking about is how efficiently those powerhouse cells — the muscle cells of our body — burn the energy we bring in."

Energy is delivered to the body in the form of calories. And if you keep your caloric intake exactly the same as you get older, says Phillips, those unburned calories end up as fat. 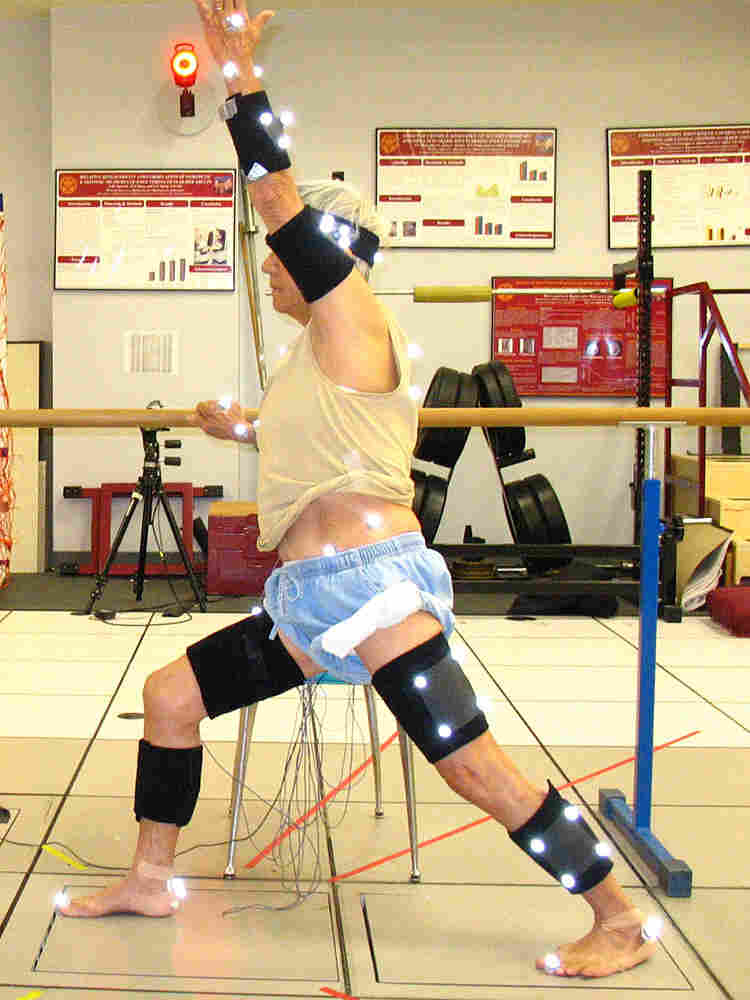 Researchers test older adults in different yoga positions to determine how each pose stresses muscles and joints — to maximize strength-building and minimize risk of injury. The markers on the subject help the researchers create a musculoskeletal model of the poses. Musculoskeletal Biomechanics Research Laboratory at USC hide caption 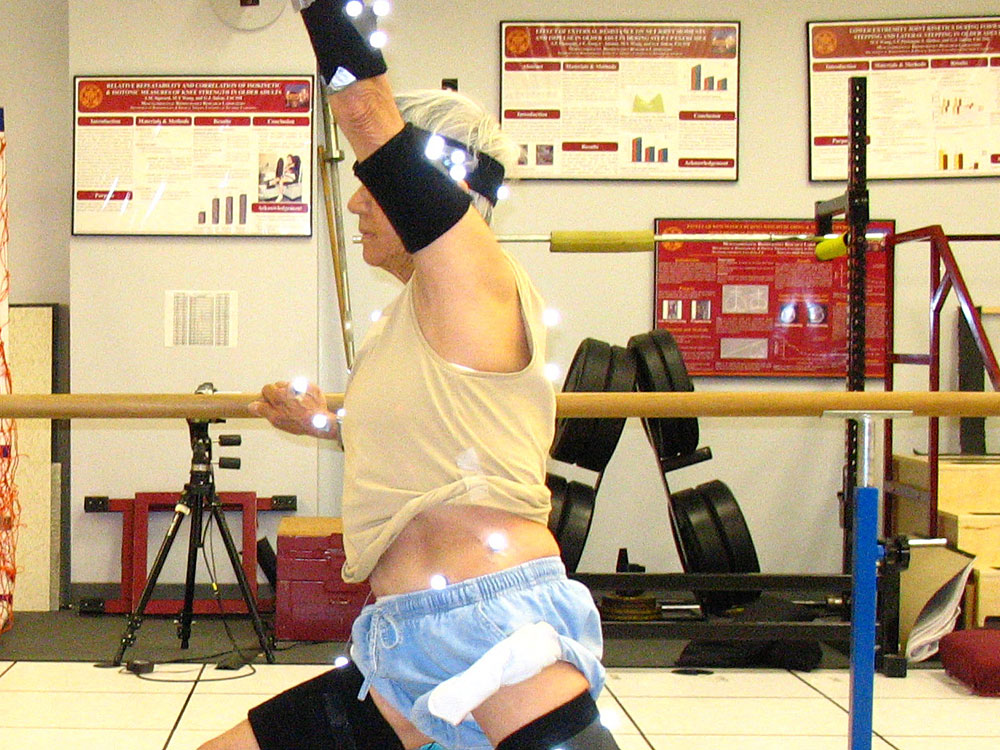 Researchers test older adults in different yoga positions to determine how each pose stresses muscles and joints — to maximize strength-building and minimize risk of injury. The markers on the subject help the researchers create a musculoskeletal model of the poses.

Its sort of a one-two punch, says Wanagat. The energy powerhouse cells in muscles get damaged with age. That damage accumulates over time and, on top of that, the body's ability to repair that damage also dwindles with aging.

Building Strength At Any Age

And that's where exercise comes in. Wanagat says countless studies have shown that exercise — even among individuals in their 80s — works. It actually helps the muscle cells get bigger. And beyond size, it makes the muscles stronger.

"We aren't sure exactly how exercise makes muscles stronger, but we know that when we measure the grip strength of the hands or feet, grip is strongest just after exercise, even among people in their 80s and 90s. So weightlifting at any age offers low risk and great benefit, says Wanagat.

At UCLA, geriatrician and researcher Gail Greendale has just begun a second yoga study with seniors to try to figure out what poses work best for the older body. Greendale wants to understand how each yoga pose stresses muscles and joints. Then, she hopes to figure out how to modify the poses for the older body in order to maximize strength-building and minimize injury.

In addition, Greendale says that as we age the immune system can get out of whack, turning on an inflammatory response when there are no bacteria or viruses to kill, and keeping it on long after the body's invaders have left. Such an inappropriate inflammatory response can actually damage one's own cells in whatever part of the body the inflammation occurs, whether it's in muscles, joints or organs.

Ensuring such muscle and joint strength can also help fight this and other unfortunate aspects of aging, arthritis and inflammation. People over 75 are likely to have chronic joint problems, says Greendale. The joints are less able to tolerate the strain and stress of movement; they can be painful and swollen. Building joint and muscle strength can defend against that.