Accessibility links
Prehistoric Megafish Ate Ocean's Tiniest Critters Before whales, when dinosaurs roamed the Earth, giant filter-feeding fish swam the prehistoric seas. By going back and searching through museums for misunderstood or overlooked fossils, a researcher found evidence that these fish existed for more than 100 million years — far longer than scientists had previously thought. 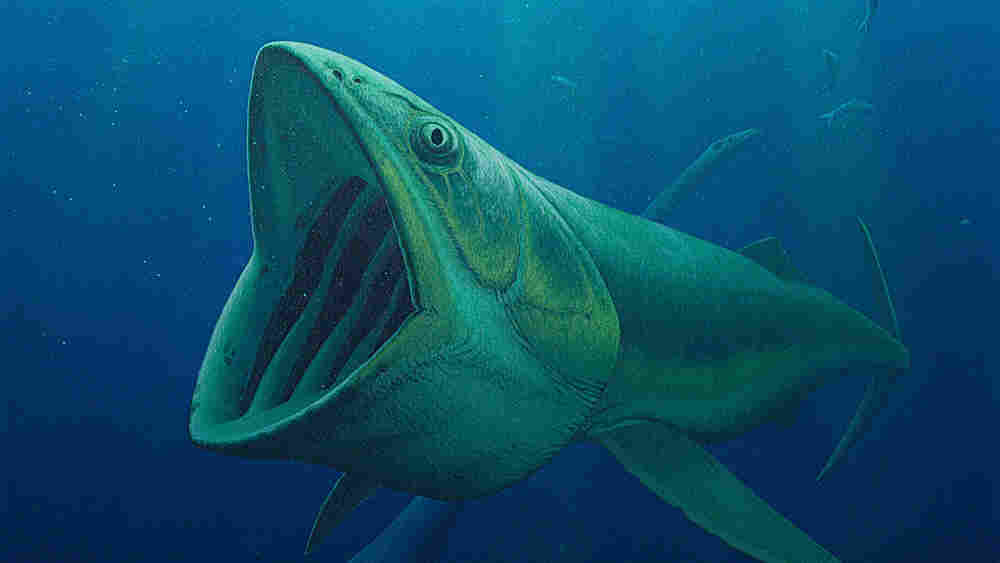 An artist's rendering of the 70-million-year-old fish Bonnerichthys. This large bony fish got its dinner much like today's whales, by slurping in water and filtering out tiny sea creatures. Image courtesy of Robert Nicholls, www.paleocreations.com hide caption

During the age of the dinosaurs, the oceans were filled with fierce marine reptiles. Like the terrible lizards on land, these toothy giants swam around snapping up their prey. But a new study suggests that's a rather one-sided picture of that ancient watery world.

It turns out that this also was an era of gentle giants — large bony fish that got their dinner much like today's whales, by slurping in water and filtering out tiny sea creatures, according to a new report in the journal Science.

"You can sort of flip into children's books of prehistoric life and you see these sort of vignettes from deep time of these scary reptiles doing horrible things to each other, but what you're missing are kind of these giant animals that are filter-feeding, eating plankton," says Matt Friedman, who studies fossil fishes at the University of Oxford. 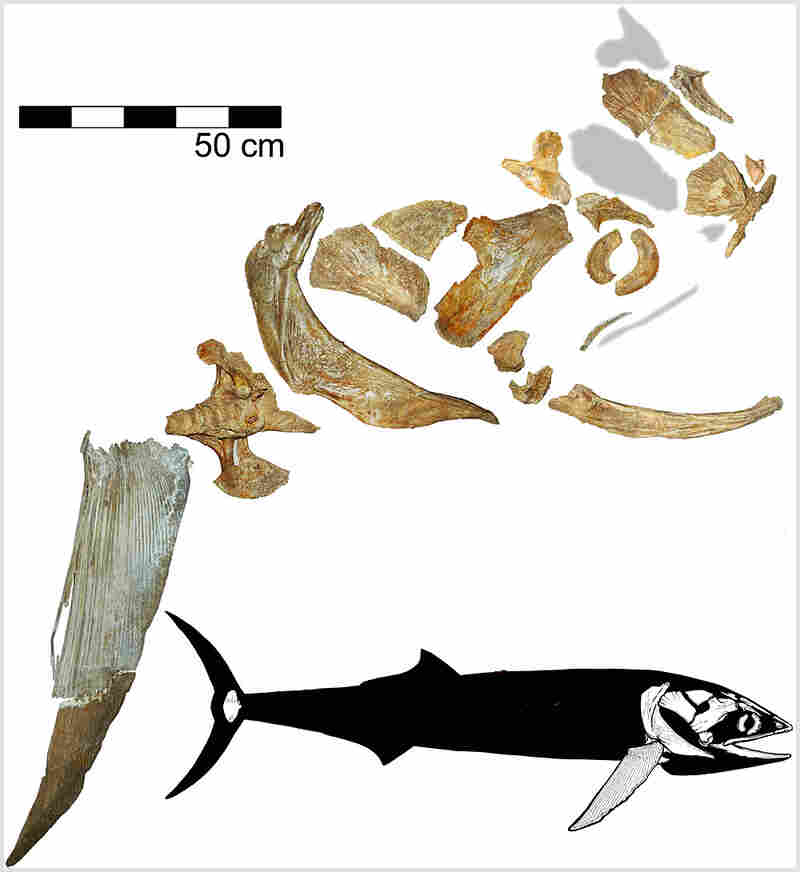 The fossil remains of Bonnerichthys, with a diagram of the fish for reference. These large, filter-feeding fish swam the seas for more than 100 million years, until they died off during the same event that killed the dinosaurs. Image courtesy of Dr. M. Friedman, University of Oxford hide caption 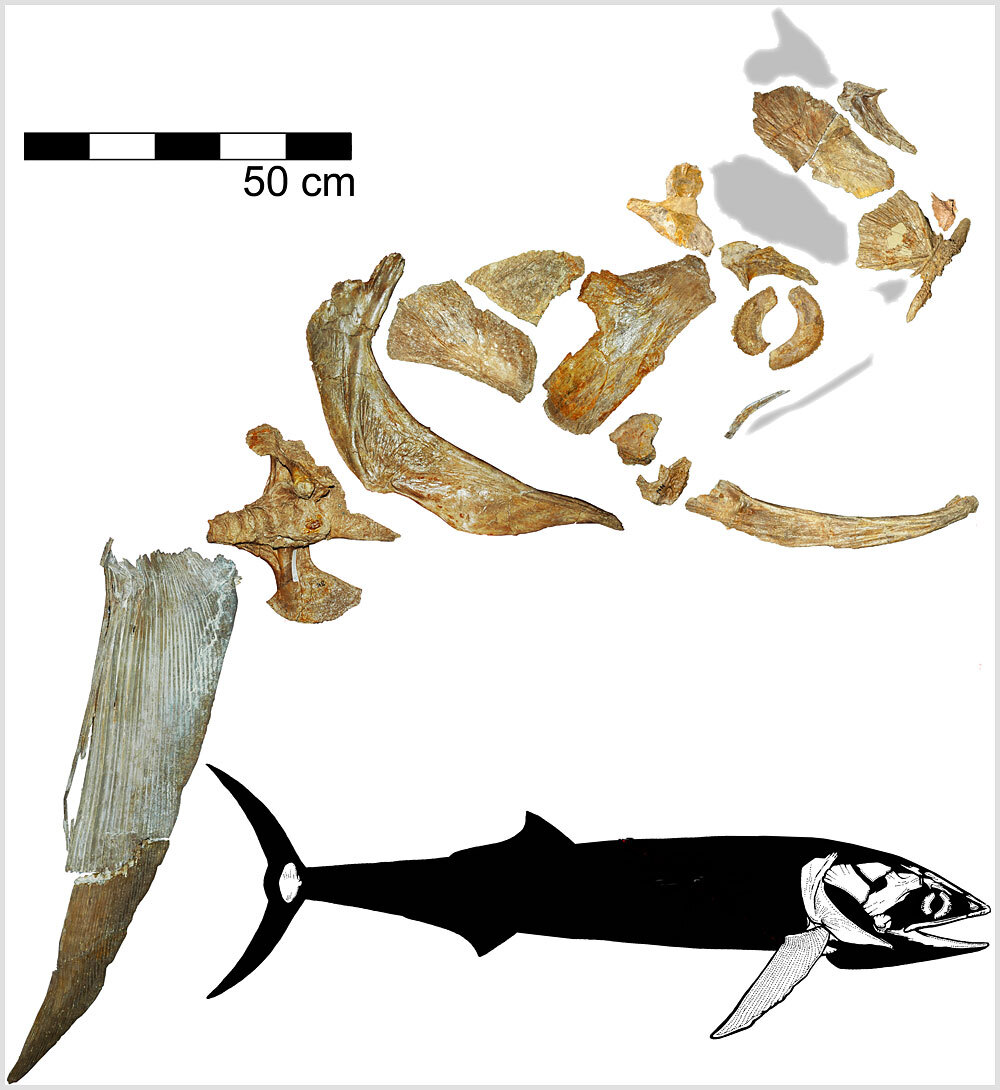 The fossil remains of Bonnerichthys, with a diagram of the fish for reference. These large, filter-feeding fish swam the seas for more than 100 million years, until they died off during the same event that killed the dinosaurs.

These large, bony fish lived long before whales and yet seem to have occupied the same ecological niche as whales do today.

Home On The Range, Where The Megafish Play

This new view of ancient marine life began with a chance discovery Friedman made a few years ago, when he was out doing some research at the Rocky Mountain Dinosaur Resource Center in Colorado. While he was there, some workers were preparing the fossil of what was thought be a kind of giant predatory swordfish, based on its distinctive fins.

"They got their set of fins, as they had expected. And then they got a series of kind of oddly-shaped plates and a bunch of rod-like bones ... bits and pieces of bone that they couldn't make head or tail of," Friedman says.

They called Friedman over and asked him to take a look. "Then the penny dropped and I sort of realized what this thing was," he says.

The unusual bones looked like structures for gulping in water and taking out little bits of food, suggesting that this fish was a filter-feeder. And that was really surprising. "Because we had known that there were fish that did this for a living, sort of got to very big sizes and filter fed," Friedman explains. "But we thought that they were limited to a very, very short period in the fossil record — that they were maybe around for 20 million years."

But the fossils he was looking at in Colorado were 80 million years younger, he says. "And so that immediately suggested that these animals had a much longer evolutionary history than we ever thought."

More Than One Way To Catch A Fossil Fish

Friedman wondered how many other fish like this lived back then. He decided to look for other fossil specimens that might have been missed. "Many museums have drawers labeled basically 'undetermined fish remains' or things like this," he says. And when he searched those drawers for filter feeders, he found them.

He says that in London, for example, "in the course of an afternoon at the museum there, I found three additional examples of these animals."

It now looks like big, filter-feeding fish swam the seas for more than 100 million years, until they died off during the same event that killed the dinosaurs.

"And then soon after you have the first appearance of all these modern groups of filter feeders — your first manta rays, your first whale sharks, your first basking sharks, and then later on your first whales — after this group of giant filter-feeding fishes goes extinct," says Friedman.

The End Of The Filter-Feeder Mystery

The discoveries have impressed Nick Pyenson, a whale paleontologist with the Smithsonian Institution. "As a paleontologist I am always looking forward to being surprised by what we know about the fossil record, so this is really welcome news," he says.

And this news solves a long-standing mystery, says Pyenson. Today's oceans have all these large filter feeders, and scientists had been puzzled by the fact that similar creatures were basically missing from the earlier fossil record. "The fact that we didn't see suspension-feeding filter feeders was really kind of a big question mark," says Pyenson. "Where were all these guys?"