Accessibility links
Celebrating Caravaggio: First Of The Bad-Boy Artists In his time, the Italian master outraged the church and led a scandalous double life. Now Rome, the city where Caravaggio was both hailed and rejected, is marking the 400th anniversary of his death by hosting a major exhibit of his paintings from museums all over the world. 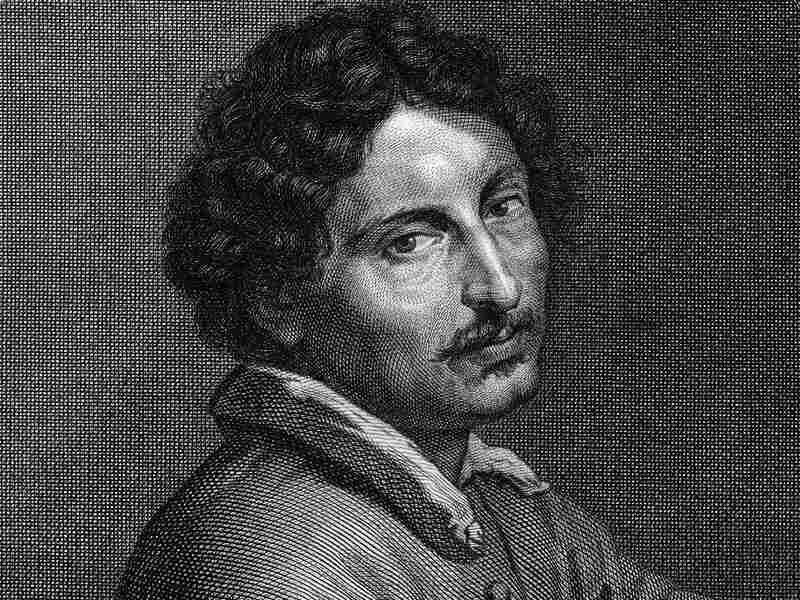 Italian artist Caravaggio, seen in this 1754 rendering, is believed by many art lovers to be the greatest painter of all time. Hulton Archive/Getty Images hide caption 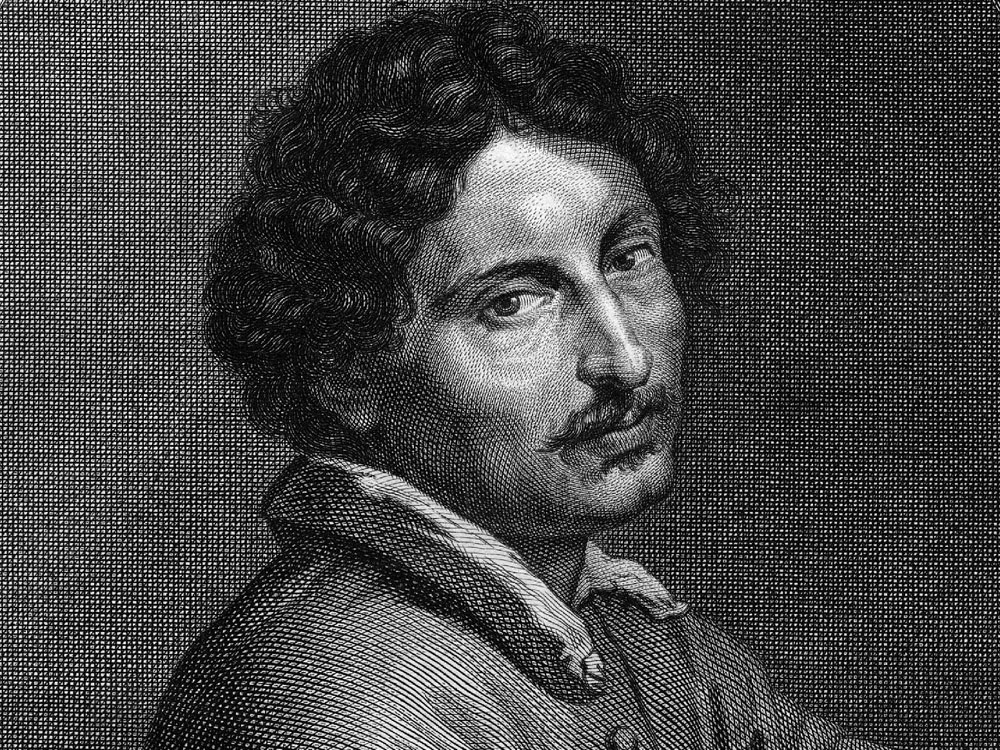 Italian artist Caravaggio, seen in this 1754 rendering, is believed by many art lovers to be the greatest painter of all time.

This year marks the 400th anniversary of the death of the Italian artist Caravaggio, believed by many art lovers to be the greatest painter of all time. Rome, the city where he was both hailed and rejected, is hosting a major exhibition of masterpieces from all over the world showcasing the first of the bad-boy artists.

Exhibition visitors are plunged into near-total darkness — only the canvases are lighted: Lute Player, Cardsharps, Judith and Holofernes, the Conversion of Saul and many more.

Claudia Palmira Acunto is admiring a painting of a young Bacchus, the god of wine. "I'm just marveling at the sensuality of the skin," she says, "and the contrast of textures from the fruit to the wine to the fabric; it's chiaroscuro."

Caravaggio invented this groundbreaking technique of light and darkness, with a single, powerful ray of light coming from outside the frame. In his time, the norm in painting was a vague and diffuse light. Caravaggio's contrast of shadow and light produced a totally new intensity and stark realism.

Gallery: The Works Of Caravaggio

Italian painter Michelangelo Merisi da Caravaggio was known for his dramatic style. Here are several of his better-known works — some of which will be featured in a historic exhibition at Scuderie del Quirinale in Rome.

Art scholar Stefania Macioce points out the modernity of these works. "If you think of the age, 16th century, there is same way to use the light like modern photography," she says. "It's fantastic."

Caravaggio's use of light and shadow mirrored the ups and downs of his turbulent life.

It was the time of Galileo and Monteverdi, and the painter's life reads like a play by Shakespeare, another of his contemporaries.

Born in Milan in 1571, Caravaggio arrived in Rome at the height of the Inquisition, when the church was all-powerful. But Rome also had a rich low-life of courtesans, gamblers and brawlers. Caravaggio led a double life, dividing his time between the gilded salons of the powerful cardinals who were his art patrons, and the back-alley demimonde of whorehouses and taverns — the inspiration for his paintings.

Art historian Maurizio Calvesi says the artist rejected the uplifting Baroque style so dear to the church, and plunged biblical narratives into the gloom and desperation of contemporary reality.

"Caravaggio is the opposite of the Baroque, which glorifies wealth, luxury and the triumphant Catholic Church," Calvesi says. "He was deeply revolutionary; he brought the human aspect of God back to earth."

For models, Caravaggio used laborers, prostitutes and gypsies. The church was outraged. Painting after painting was rejected: a dead Virgin that looked like a bloated corpse, a jailer yanking Christ's hair, saints with dirty feet.

Cardinal Federico Borromeo wrote in indignation, "Contaminated men must not deal with the sacred."

The 19th century art critic John Ruskin called him the "ruffian Caravaggio," and described his work as "horror and ugliness and filthiness of sin."

Rome's Sant'Agostino Church is filled with treasures — a Raphael, a Sansovino and a Bernini — but visitors all flock first to a corner chapel on the left and drop coins in a machine to illuminate the canvas. Madonna of Loreto shows a barefoot Virgin holding the baby Jesus. She stands in a doorway in the evening shadow, one leg saucily crossed over the other.

Visitor Cinzia Margotti is enthralled. "The church couldn't possibly like a Madonna like this one," Margotti says. "Just look at her. She's real and beautiful but too free for the 16th century church."

Many of Caravaggio's works were filled with grief, suffering and violence — images in contrast with the church's predilection for rosy cherubs and angels in the heavens.

Francine Prose, author of Caravaggio: Painter of Miracles, says his paintings reflected the violence of the times. "Beheadings were a daily fact of life in Rome," she says. "So if you look at Judith and Holofernes or the Beheading of John the Baptist, which is in Malta, they are paintings of executions. His crucifixions, the deaths of saints are executions, so he lived in a very violent time."

Under papal orders, heretics were burned at the stake. Caravaggio may have even witnessed the execution of the philosopher and theologian Giordano Bruno in Campo dei Fiori in 1600.

Caravaggio also led a violent life. He left no letters, so all that is known about him comes through judicial records of his many scuffles with the law. Sentenced to death in 1606 for murdering a man, he fled Rome.

The next four years were spent in flight: to Naples, to Malta, to Sicily and back to Naples. In Malta, he got in trouble again. He was arrested but managed to escape by scaling the fortress-prison walls. His works got darker and more dramatic — he believed papal hit men were on his heels. He painted David with the Head of Goliath, portraying a delicate young man holding a severed head that was Caravaggio's own self-portrait, a tormented mask of agony and horror.

Suddenly, he got long-hoped-for news: He was pardoned, and he headed back to Rome.

As one of his biographers wrote, "Bad luck did not abandon him."

On a hot July day in 1610, a semiconscious Caravaggio was found lying on a beach along the Tuscan coast.

It remains a mystery whether he had come down with malaria or some other illness, or whether he had been wounded in a duel. Two days later in the local hospital, the greatest artist of his time ended his all-too-brief career.

After his death, Caravaggio was forgotten for 300 years. It wasn't until the 20th century that the visionary genius was rediscovered.

Prose explains why Caravaggio resonates today: "There is a way he speaks to us at this moment, and it's thrilling to find someone who lived centuries before who seems so modern, so timely, so contemporary, and has so much to say about the way, for better or worse, that we live now."