Accessibility links
Rational Or Emotional? Your Brain On Food Anyone who's lost weight knows it can be really hard to keep the pounds off. Scientists think this has to do with a hormone called leptin. Researchers are exploring the role leptin may play in how the brain sees food — either from an emotional, food-seeking mindset; or from a more rational, decision-making approach. 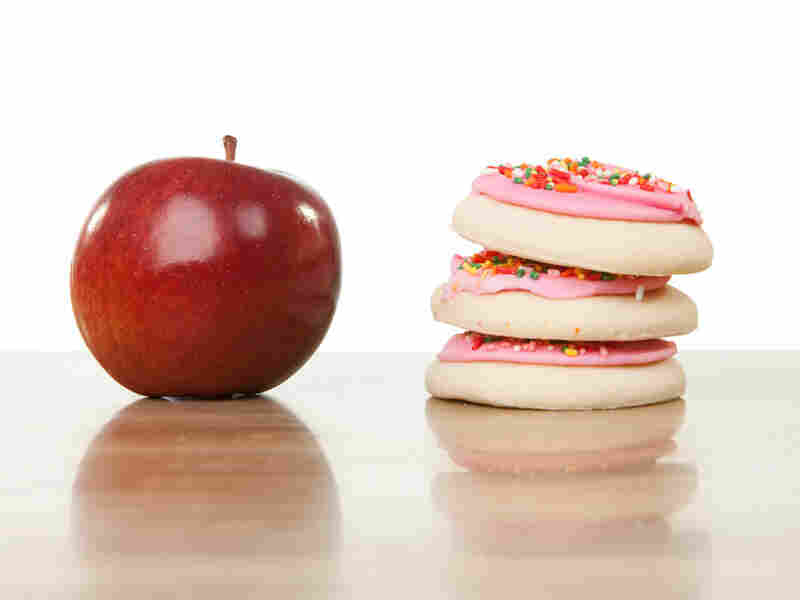 Scientists are working to understand what hormonal and physiological cues in the body lead the brain to respond to food emotionally. iStockphoto.com hide caption 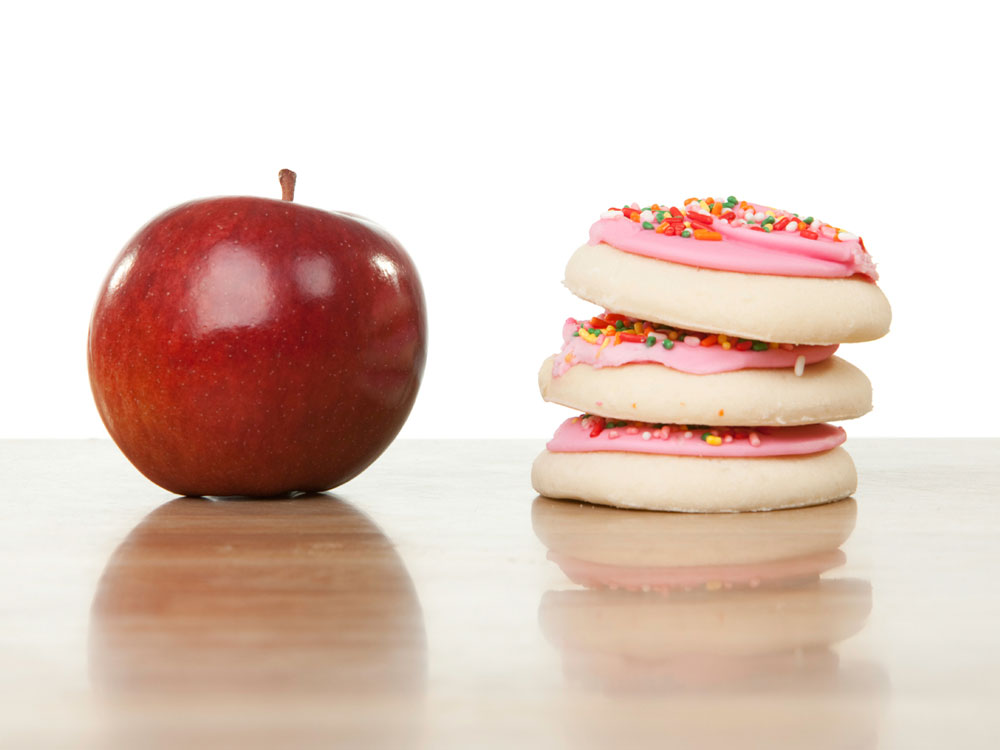 Scientists are working to understand what hormonal and physiological cues in the body lead the brain to respond to food emotionally.

Willpower plays a role in dieting. But keeping the weight off after you've lost it? This is where our physiology can get in the way. Research suggests that hormone shifts that follow weight loss play a role in changing the way our brain responds to food.

"After you've lost weight, you have an increase in the emotional response to food," says Columbia University Medical Center researcher Michael Rosenbaum, who studies the body's response to weight loss. He says you also see "a decrease in the activity of brain systems that might be more involved in restraint."

And there's another factor making weight loss maintenance tough, too: a slower metabolism. When you lose weight, the body adapts to conserve energy, so it just doesn't need as many calories.

One of the hormones that play a role in controlling appetite in the body is called leptin. After significant weight loss, leptin levels drop. This seems to signal to the brain a need to seek more food.

Rosenbaum and his colleague Joy Hirsch, a neuroscientist at Columbia University Medical Center, designed an experiment to better understand the relationship between the brain, leptin and weight-loss maintenance.

They recruited overweight volunteers who agreed to a calorie-restricted diet aimed at shedding 10 percent of body weight. Using fMRI scans, the researchers looked at how the volunteers' brain responses to seeing food changed after weight loss.

During their study, Hirsch and her colleagues found some interesting patterns of neural activity in their volunteers after they'd lost weight.

For instance, there was more blood flow to areas of the brain known to be involved in the emotional control of food intake, such as the brainstem and parahippocampal gyrus.

But here's the fascinating part: When they restored leptin to these volunteers by giving them injections of the hormone, the brain response changed. When they saw food, there was more activity in brain areas associated with conscious decisions.

"It's a feedback mechanism," says Rexford Ahima of the University of Pennsylvania. Leptin signals the brain; when there's a deficiency of the hormone, the areas of the brain associated with reward-seeking become more active.

This evolutionary programming is out of sync with what's healthiest for our bodies. The signal evolved over thousands of years when food was scarce. It was the brain's way of telling the body to seek food and protect fat stores. Many people — particularly those who are prone to gain weight easily — have retained more genes that program us to seek food.

As for the role of leptin, researchers say it's clear that leptin is not an anti-obesity hormone — it won't help you lose weight.

But Ahima says the most recent research suggests that leptin — or drugs that would stimulate leptin signaling — could potentially facilitate the maintenance of weight loss. So far, this has only been tested in experimental trials.

My Brain's Response To 'The Food Parade' 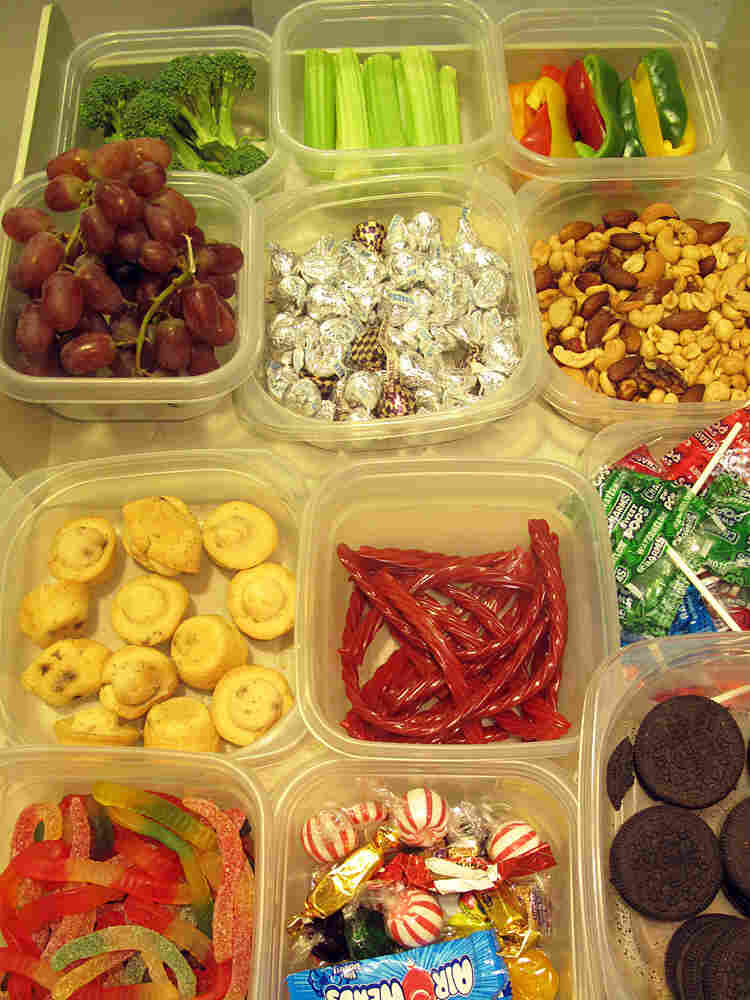 Researchers tested subjects, including NPR's Allison Aubrey, by showing them a mirror image of the real foods displayed above. They compared their brain response to food with the brain activity when it viewed mundane household objects. Allison Aubrey/NPR hide caption

The researchers invited me to their lab at the Neurological Institute at Columbia to see exactly how the experiment works. Curious about how my brain would respond to food, I agreed to an fMRI scan.

As I lay in the scanner, I watched through a mirror as research assistants passed all kinds of foods — from carrot sticks and apples to Hershey's Kisses and cookies — through my line of sight.

"Think of it as a food parade," explained Hirsch. After 20 minutes of watching food, the researchers began analyzing my brain responses.

"You will see a very specific circuit in your brain that's associated with the appreciation of foods," explained Hirsch.

Hirsch says the patterns in my brain images were similar to those of test subjects with restored leptin. She pointed to areas in my parietal and frontal lobes that had activated as I watched the "food parade."

"This is the executive part of the brain," says Hirsch. "You're responding like somebody in a homeostatic [stable] state." This means that when I saw the images of food, my brain activated decision-making areas, and there wasn't nearly as much activity in the emotional, reward-seeking parts of the brain. Hirsch also pointed out that my brain showed lots of stimulation in areas related to visual processing. 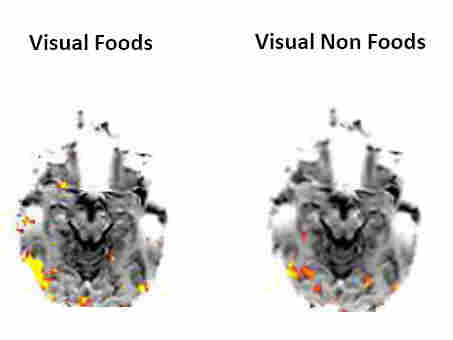 Researchers spotted drastic difference in Aubrey's brain activity when she looked at foods, as compared to mundane objects like a cell phone. Areas of the brain associated with visual stimulation really lit up. Courtesy Columbia University Medical Center hide caption

Of course my brain response could change. The brain images captured just a snapshot in time. But it was fascinating to see that I didn't have a very emotional response to food. By comparison, images they'd shown me of mundane household objects — such as a cell phone — didn't evoke nearly as much activity in the areas associated with executive function or visual processing.

Hirsch and Rosenbaum's findings were published in the Journal of Clinical Investigation. They're now working on follow-up studies to figure out if people's behavior maps with what they're seeing in brain scans.

"It's a work in progress," says Hirsch. But she thinks this research is showing that our physiology tends to set the brain in one of two modes:

The "regain" mode, which nudges us, emotionally, to seek food. Or the "retain" mode, which helps us maintain a steady weight. Researchers are following up with more studies to see if people's eating behaviors mirror their brain response to food.