Accessibility links
Why Pay For Health Insurance When You Can Steal It? Experts say medical identity theft has increased sharply in recent months. Patients use someone else's insurance card, Social Security number or name to receive health care. This can be dangerous for victims, especially if their imposter's health information is recorded in their chart and causes a mix-up.

Listen
Why Pay For Health Insurance When You Can Steal It? 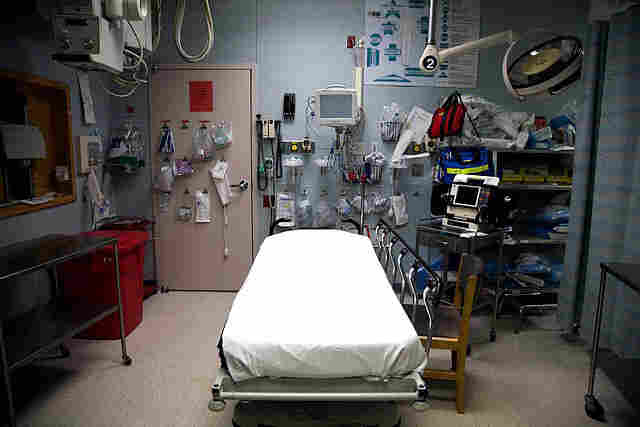 The trauma room at CoxHealth Hospital's emergency and trauma department in Springfield, Mo. The hospital has reported an increase in medical identity theft in the ER in the past several months. Officials suspect that the faltering economy could be the reason for the rise. Alexandra Crowder for NPR hide caption 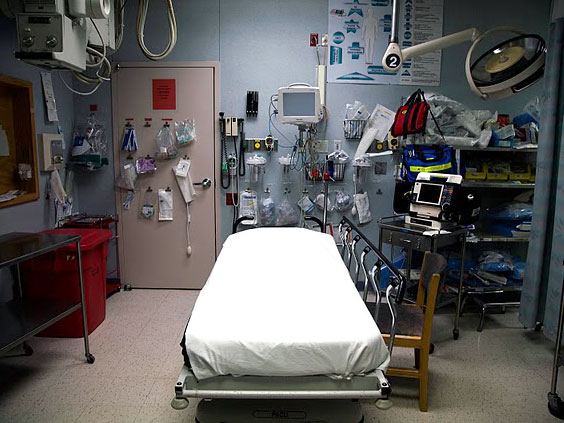 The trauma room at CoxHealth Hospital's emergency and trauma department in Springfield, Mo. The hospital has reported an increase in medical identity theft in the ER in the past several months. Officials suspect that the faltering economy could be the reason for the rise.

These days, most people know the drill for dealing with a stolen credit card number — call the card company and have the account canceled.

But experts say a different type of identity theft is on the rise — one that could compromise both the victim's credit and physical safety. Patients using someone else's name, Social Security number or insurance card to get health care could risk their victim's health if inaccurate information, such as blood type and medications, is recorded on the victim's chart.

Imposters In The ER

CoxHealth Hospital in Springfield, Mo., has one of the busiest emergency rooms in southwest Missouri. In the span of a few minutes, an elderly woman arrives in an ambulance, a police officer escorts a young woman through the doors, and children in the waiting room become progressively restless.

Officials at this hospital say more and more of these patients walking through the doors are pretending to be someone else so they won't have to pay for their own medical bills.

Over the past 12 months, the hospital has seen nine instances of identity theft — four in the past 45 days, says Betty Breshears, vice president of corporate integrity at the hospital.

Breshears is teaching the hospital's emergency room staff about "red flags" that signal when a patient is using someone else's name, Social Security number or insurance card.

"We try to get our patients to speak their information to us, so that we can confirm it," she says. "Because we'll find that a lot of times if they're presenting with a false ID, they'll stumble on those words."

St. John's Health System, the other main health care provider in Springfield, has also seen an increase in identity theft over the past year.

Hospitals across the nation are scrambling to prevent ID theft because of the particular nightmare it presents when one patient's medical chart gets mixed up with someone else's.

Pam Dixon, executive director of the World Privacy Forum, has been trying to raise awareness about this crime for years now.

She says that in nearly all the identity cases she's seen, medical charts are changed, and that poses a major problem.

Dixon says there's no national standard for dealing with medical identity theft. It's also hard to fix once the damage is done.

Looking Out For Theft

And increasingly on the national level, she says, it's an "insider job," with the thieves working as receptionists and accountants within the health care field itself.

Both Springfield hospitals say all of the cases they've seen here so far involve patients, and not their staff members.

Dixon advises patients to get a hard copy of their health care records, even if there's a fee involved. That way, if medical charts are altered, there's a way to prove what they used to look like.

Stephen Niemczak, a special agent with the U.S. Department of Health and Human Services Office of the Inspector General, says ID thieves are becoming bolder and more sophisticated.

"It is a large problem that affects most corners of our country," Niemczak says. "Multiple states are involved, and these little groups work with one another across state lines."

Insurance companies are trying to crack down too, because if someone's stealing insurance to pay their bill, it means higher costs for the legitimate policyholders.

Still, when it comes to medical identity theft, it's the hospitals and the patients who are most at risk.