Accessibility links
U.S. Official: Responsive Afghan Government Is Goal Haji Zahir, the newly appointed governor of Marjah, is getting a lot of support from civilian and government agencies, which Gen. Stanley McChrystal had dubbed "government in a box." State Department adviser Bay Fang, who is working with the support team, says they are doing everything to ensure the new government is responsive to the people.

Haji Zahir, the newly appointed governor of Marjah, is getting a lot of support from civilian and government agencies, which Gen. Stanley McChrystal had dubbed "government in a box." State Department adviser Bay Fang, who is working with the support team, says they are doing everything to ensure the new government is responsive to the people.

Ms. BAY FANG (Adviser, Department of State): The district support team itself is actually only four people: It's two British and two American advisers. They cover governance, stabilization and development. And they will be going in with Haji Zahir, as well as a few Afghan staff for the deputy district governor. One of the first tasks that the deputy district governor will have is filling what's called the tashkeel, which is the sort of roster of civil servants that are needed to run a district government.

SIEGEL: But you're describing a rather thin level of, let's say, administrative personnel of the Americans and the Brits, and they would be directing a largely Afghan and Afghan administration of an Afghan city.

Ms. FANG: They wouldn't be directing it, no. It would be the Afghans themselves who are in charge. That's why there's the process for Haji Zahir to travel around the district and to meet with the village elders and eventually convene a larger shura, which will elect these community council members.

SIEGEL: There is, I gather, a former police chief from the area still close to the Karzai government, but widely regarded as having been corrupt and heavy-handed in his day. Can the government in a box control who has influence over the local administration?

Ms. FANG: We're very aware of the dynamics that existed before the Taliban moved in, in which in some ways allowed the Taliban to move in. And we will do everything that we can to make sure that the government that moves in now is responsive to the people and accountable to them.

SIEGEL: A mission to create jobs, provide health care and education. It's a mission that many governments have a hard time achieving throughout the world. And Marjah is hardly in an ideal situation. Are there clear criteria you've set of how many jobs or what kind of education should be established to demonstrate that this is working for people's benefit?

Ms. FANG: Well, the planning process that led to the operation was actually several months long. It involved the Kabul central government working with the provincial government and the people in the district, as well as with the stabilization and governance advisers from the international community. And this was the first time that there really has been buy-in all of these different governmental levels. And we're hoping that that means that the government can go in, not only deliver basic services very quickly, put people to work through cash-for-work programs, which will employ several thousand people within weeks, but that it will be sustainable for the long run.

SIEGEL: The idea here is that people should feel satisfied with a government rather than turn to the Taliban instead. Do you face a double hurdle here, which is first to establish an administration that satisfies the local population and has jobs, for example, and second, one that also overcomes the loss of what income was coming in from opium poppies?

Ms. FANG: Exactly. So, that means not only the immediate hot stabilization efforts which will put people to work and give them employment and cash in their hands right away, but also longer term reconstruction. There is a plan by all these different sectors, by the health sector, the education sector, et cetera that will put in place the services that are necessary in the long run for the government to win the confidence of the people.

SIEGEL: I assume that one of the vital weapons you're bringing into the area is the suitcase full of cash to give people. That's part of what's happening here.

Ms. FANG: There is cash going in, but more importantly, there's also the infrastructure that we have prepared for this government in a box. So, that's, you know, a communication suite, that's office equipment. It's sort of everything that will be needed to set up shop quickly in the district center.

SIEGEL: Bay Fang is an adviser to the U.S. State Department in Helmand province, Afghanistan. 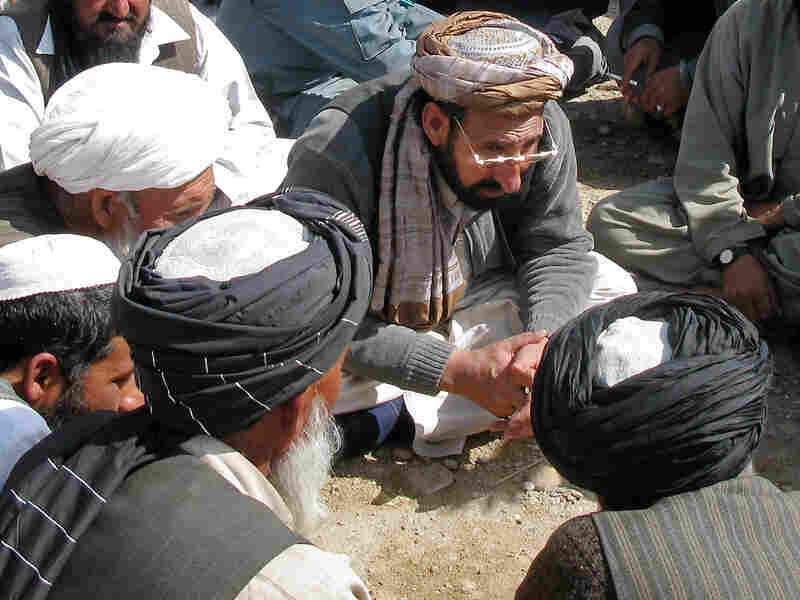 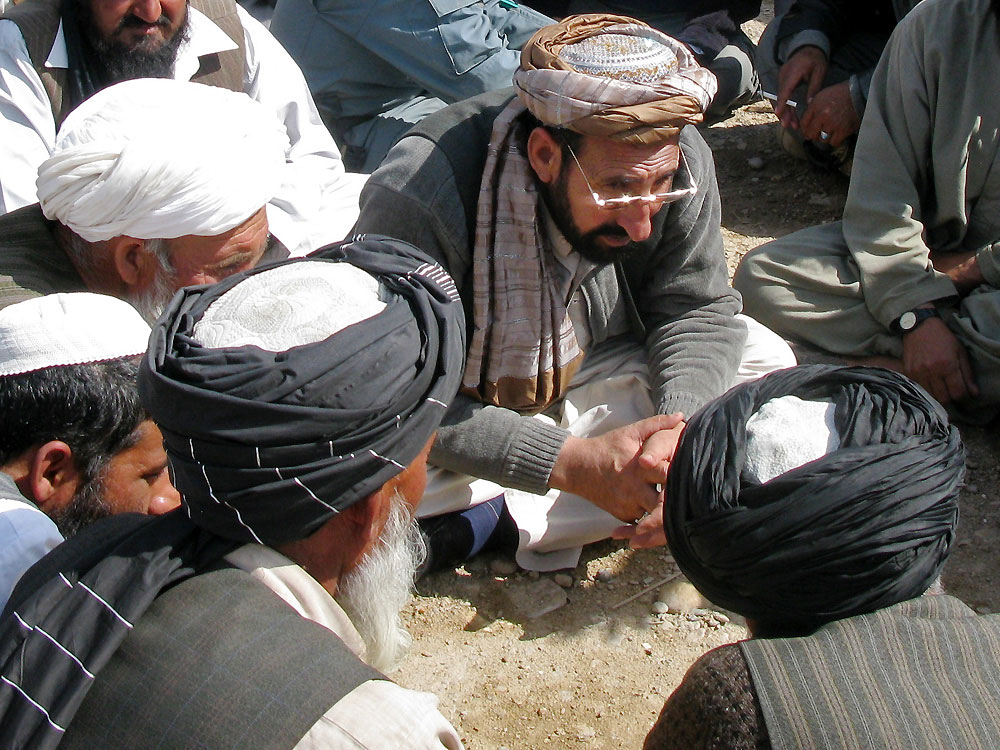 Haji Zahir, the new governor of Marjah in Helmand province, listens to residents' grievances Monday. It was the first time an Afghan government official visited the former Taliban stronghold in two years.

In Afghanistan, war took a back seat to politics Monday, the 10th day of the U.S.-led offensive in a major Taliban stronghold in southern Helmand province.

For the first time in two years, an official of the Afghan government was able to get acquainted with the locals. The new Afghan governor of Marjah was flown into the city by the U.S. Marines to meet with his constituents.

He called on the people he met to reject the Taliban and join with the Afghan government. But it's going to take more than words to win over Marjah's residents.

With the help of U.S. government advisers and hundreds of thousands of dollars in aid money, Gov. Haji Zahir is being asked to bring reliable and honest governance to the town.

Zahir is a well-to-do Afghan from Helmand province who until recently lived in Germany. He has a carefully groomed beard and wears a traditional Afghan tunic and prayer cap.

The American and Afghan governments are pinning high hopes on him. And his job starts even before the Marines and Afghan soldiers finish driving the militants out.

If this is going to work in Marjah as it has everywhere else, it's got to be Afghans in the lead.

The move shows local residents that a governor is "ready to come in and he's in the lead, he's going to start administrating work projects, day labor projects," Nicholson said.

Zahir wasted no time getting to work. Amid the ruins of this farming town — which came into being in the 1950s with American aid money and was destroyed in a Special Forces attack a year ago — he held a shura, or council, with about 50 residents.

He listened to their grievances. He acknowledged the two-year deadline they gave him to improve their lives.

The governor pledged to visit them in their homes and promised them he would not accept bribes to resolve disputes or conduct business.

Nicholson and Kael Weston, the top U.S. State Department representative in Helmand, watched quietly from some distance away.

"We've been doing this for a while, and we know they don't want to see Americans too close to their people, and that's understandable," Weston said.

"If this is going to work in Marjah as it has everywhere else," Nicholson added, "it's got to be Afghans in the lead."

The two men agreed: no American speeches this day.

After two hours, Zahir looked satisfied. He said he now has a good sense of what he'll tackle first when he moves permanently to Marjah in the coming days.

But some of the residents are leery. They complain that the last time the government was in charge in Marjah two years ago, corrupt police officers terrorized residents.

A tractor driver named Faqir Mohammad said the Taliban brought peace to Marjah and generally didn't interfere in people's business. He added that residents were happy with them.

By comparison, he said, police officers in Marjah stole people's motorcycles and cash, and were involved in kidnapping.

That's frustrating to Weston of the State Department.

"That's not fun to hear, given that there's a lot of American blood that's been spilled in this city in the last few days. But it's a reality check that our people, the Afghan government need to hear — that they seem to have perceived the government as the biggest problem, not the Taliban," Weston says. "And that is hard to hear."