Accessibility links
Music Review: 'Way Out Here' — Josh Thompson's Good Ol' Country Debut The singer-songwriter has released his first album, Way Out Here, and rock critic Ken Tucker says it's one of the best country music debuts in a long while. 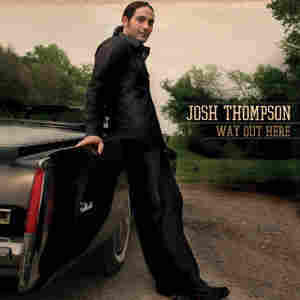 Within seven months of arriving in Nashville from his native Wisconsin, singer-songwriter Josh Thompson had his first hit song and a music-publishing deal. Now he's released his first album, Way Out Here, in which he comes on like an old pro at making country-music albums. That is, he makes them the way they used to, when albums arrived on vinyl, five songs to a side.

Most stars think that putting less than 15 tracks on a collection is cheating, while they make most of their cash on hit-single downloads. But Josh Thompson has sussed out his key demo. He knows the country-music audience still buys albums, and probably won't squawk about the number of songs as long as the quality is consistent.

"Won't Be Lonely Long" is a first-rate song that's addictively clever; it fakes you out in the beginning by making you think it's going to be a tears-in-my-beer ballad, then kicks into an upbeat honky-tonk tune. The first, weepy verse is perfect mood music, and the raucous stuff is superb fun. Positioned as the fourth song on the album — after songs that make nods to Waylon Jennings and how all he needs is "a couple bucks when I'm itchin' for a scratch-off ticket" — Thompson is pulling off something impressive here. He's acknowledging his betters and boasting about how far he's already come, without coming off like an arrogant jerk.

Thompson possesses a strong, surging, but not particularly distinctive voice. It's the voice of a songwriter, which is how Thompson got his foot in the Nashville music industry door. He wrote a popular song for someone else — Jason Michael Carroll — called "Growing Up Is Getting Old," which proved Thompson's gift for melodic hooks and the sort of tight little puns that are the stuff of country-music mini-manifestoes.

Thompson's own album is stuffed with good examples of this-is-what-I-stand-for statements — most blazingly on the title song, "Way Out Here," where puns do the work of truth-telling. The title refers to the backwoods life the narrator describes with lovingly surly detail. But the phrase also means that this is the way we live out here, with "guns and the good Lord" invoked as warnings, and the invocation of three Johns — John Wayne, Johnny Cash and John Deere — to prove his working-class roots.

Thompson makes a point in interviews to mention his time spent pouring concrete for driveways and basements in his father's Milwaukee concrete business. Much like the hip-hop industry, authenticity — feigned or real — is important to impress upon the fans. To Thompson's credit, he doesn't brag about it excessively, and often uses it for some fun — as when he says in "You Ain't Seen Country Yet": "If you ain't made love to a Merle Haggard cassette, you ain't seen country yet."

For a first-time album, Way Out Here is impressive not just for the confidence of Thompson's delivery, but also for its consistency. One of the business models of earlier-era country music Thompson doesn't follow is the old formula of front-loading your album with two or three hit singles, and padding the rest with filler. On Way Out Here, Thompson makes every cut count.