Accessibility links
As Elections Near, Iraqi PM's Support Wanes In South After last year's provincial elections, Iraqi Prime Minister Nouri al-Maliki was the big winner, and his State of Law coalition looked unbeatable. But in the Shiite heartland of southern Iraq, support for Maliki is waning as the March 7 vote approaches. 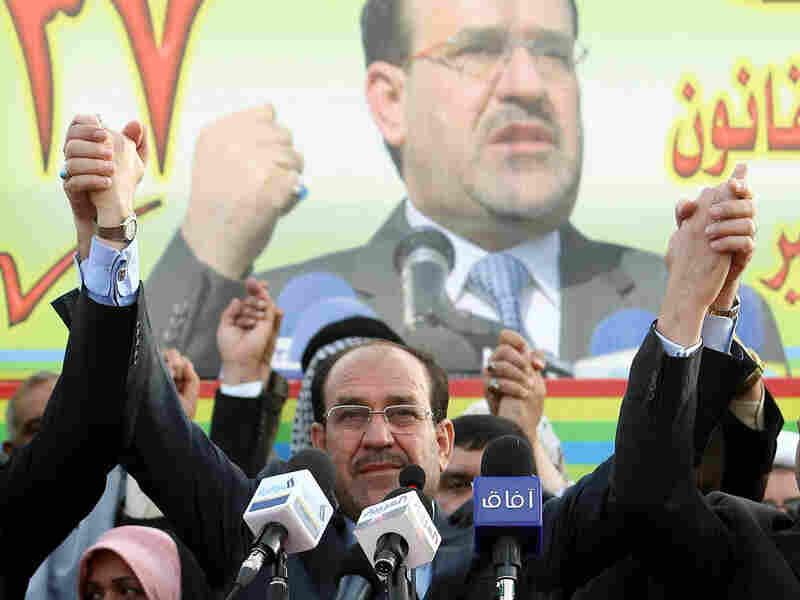 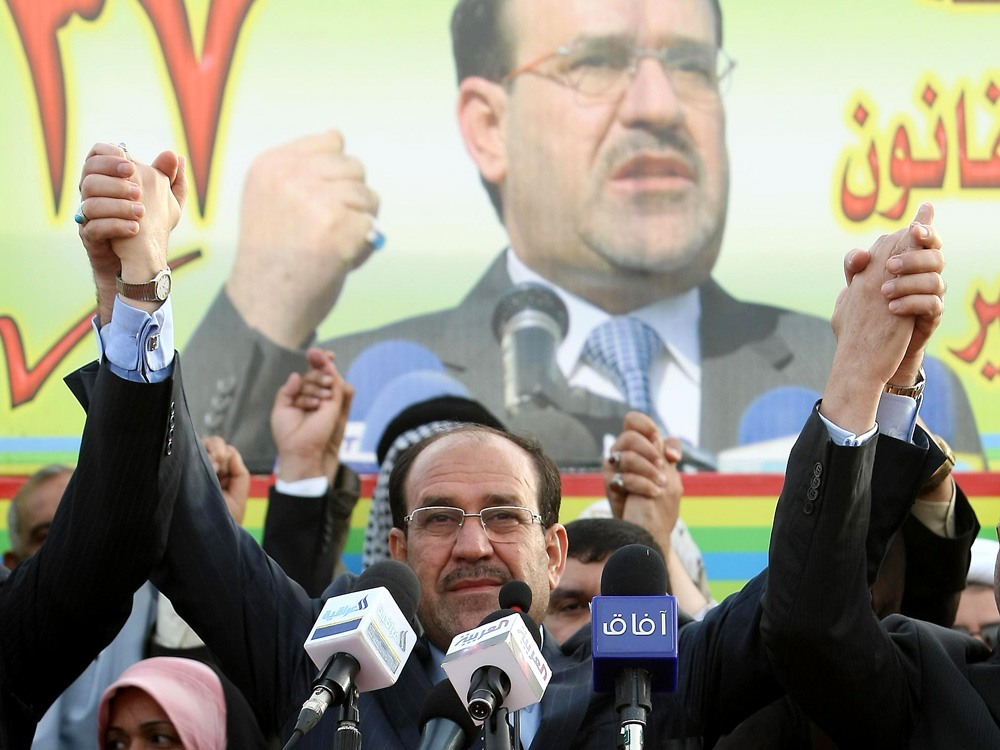 Iraqi Prime Minister Nouri al-Maliki raises his hands with members of his State of Law coalition after addressing supporters at Al-Mina Stadium during a visit to Basra, in southern Iraq, this month. Iraq is due to hold general elections on March 7, and the incumbent faces strong competition from an alliance of Iranian-backed parties.

In Iraq, the political campaign is in full swing ahead of parliamentary elections scheduled for March 7. Nowhere is the battle fiercer than in the country's southern Shiite heartland, where the leaders of the two main parties vying for power have been campaigning.

One of those leaders, Prime Minister Nouri al-Maliki, is Iraq's unlikely strongman. Initially seen as a weak compromise candidate when he was installed as prime minister four years ago, Maliki is now accused by his rivals of being a dictator in waiting.

To secure another term, he needs to win big in Iraq's Shiite south, where he is facing an alliance of Iranian-backed parties.

On a multicity tour of the region this past week, Maliki told the crowds that he is a man who can deliver.

"We have achieved security. We've signed huge oil contracts which will give Iraq money. I am not telling you that we want to achieve something. We have already achieved something," he said.

Maliki's State of Law coalition did well in provincial elections last year. But more recently, his popularity has waned, according to some Iraqi analysts.

A recent series of high-profile terrorist attacks in Baghdad and elsewhere have called into question his security credentials. And what some call his heavy-handed approach to governance also has provoked criticism.

Maliki's main rival in the south is the Iraqi National Alliance. It includes the Islamic Supreme Council of Iraq, or ISCI, and Shiite cleric Muqtada al-Sadr's political bloc.

ISCI's leader, Ammar al-Hakim, was also campaigning in the south this week. Speaking to a crowd in Diwaniyah, he said the time is right for change.

"Iraq deserves better than what it has now. With the grace of God and your help, the Iraqi National Alliance will be able to revive this country," Hakim said.

Both sides are using whatever means they can to secure votes.

In last year's provincial elections, Maliki won significant support from so-called tribal support councils that he established. In return for money and positions, tribal leaders promised to deliver votes for the prime minister — and they did.

Sheik Nabeel al-Fatlawi is one of these tribal leaders. Interviewed by phone in the city of Diwaniyah, the sheik said his tribe will vote for Maliki again this time, despite the blandishments of other political groups.

"Other parties are promising tribal leaders positions in ministries in return for votes. But the tribes here know who supported them at the beginning, who was with them during hardships, and who will support them in the future," Fatlawi said. "This is why all the tribes will support Mr. Nouri al-Maliki."

Despite vast oil deposits, much of Iraq's south is extremely poor. Successive Shiite-led governments since 2004 have done little to alleviate the poverty.

For many in the area, the election campaign has brought a bonanza. Money, blankets and appliances such as coolers or heaters are often distributed to win votes. Once the goods have been given out, though, it's unclear whether those who take them will keep their word and vote for their benefactors.

Nima al-Ibadi, who heads the Iraqi Center for Research and Studies in Najaf, says Maliki will do well because he will use the resources of government to sway voters.

"The fact that he is in office leaves him in possession of important government tools, which he is using," he says.

Ibadi says Maliki's rivals are presenting themselves as candidates of change.

"The Iraqi National Alliance doesn't have to take the blame for the lapses of the authorities, and therefore it can make promises," he says.

A recent poll Ibadi conducted shows that both sides will gain seats in the south in the upcoming vote, but neither will have an absolute majority.

He says neither the slate of party candidates on Maliki's list, nor his rival Hakim's list of candidates will be able to impose the person they want as prime minister. So, a weak nominee for prime minister is likely to be named — much how Maliki himself came to power four years ago.