Accessibility links
Web Posts May Make You Vulnerable To Crime It's fun and easy to use the Web to let friends know that you're having a great time out on the town or away on vacation. But privacy experts say it's worth thinking about how easily that information can be turned against you by criminals.

Web Posts May Make You Vulnerable To Crime

Web Posts May Make You Vulnerable To Crime 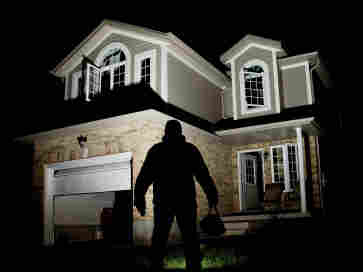 PleaseRobMe.com demonstrates that it's easy for anyone — including burglars — to find out you're not at home. iStockphoto.com hide caption

It's fun to brag when you're at a great bar or going off on vacation. Social networking sites and location-based apps have made it easy to broadcast that kind of information to your friends. The problem is that you may not just be making your friends jealous, but supplying criminals with useful information as well.

A new Web site called PleaseRobMe.com has drawn attention to the issue by repurposing posts from foursquare, a social networking site that lets people share the latest about their whereabouts. PleaseRobMe demonstrates that it's easy for anyone to find out you're not at home — and therefore, are presenting an "opportunity" for burglary.

"There are physical and economic safety risks when you're publicizing to the world where you are," says Kevin Bankston, a senior staff attorney with the Electronic Frontier Foundation. "It's obviously a treasure trove of information for criminals. PleaseRobMe is a good demonstration of how easy it is."

In a post on its Web site, foursquare notes that access to user information is limited to select universes of friends, but cautions users from pushing their status updates on more easily searchable sites, such as Twitter.

"We definitely 'get' the larger issue here — location is sensitive data and people should be careful about with whom and when they share it," writes "team foursquare."

That really is the larger issue, privacy experts say. There's no evidence that many criminals are using the Internet to pick out robbery locations, but it's likely to be a growing problem.

"We are seeing issues arising from Web sites, not only with reference to criminal acts against property, but also [gathering] intelligence about people," says an official with the California attorney general's office.

And most people are not thinking about how readily accessible to criminals their personal information is on the Internet.

"What seems like an innocent pass-off of information to a small number of friends can be useful for bad guys to exploit," says Lee Rainie, director of the Pew Internet & American Life Project."

Last year, a "bling ring" of four teenage girls and a man were arrested for allegedly carrying out a string of burglaries targeting celebrities including Lindsay Lohan and Orlando Bloom. They were accused of using Internet mapping and gossip sites to case the stars' homes.

These days, you don't have to be a celebrity for criminals to connect the dots about your location. Posts and pictures give away all the information criminals need for learning when you're on vacation, whether you have a big dog and whether you own cars or flat-screen TVs worth stealing, says Nick Newman, a computer crimes specialist with the National White Collar Crime Center.

Rainie calls it the 21st-century equivalent of reading the obituaries. Burglars have been known to read obits to find out when funerals are taking place, knowing that the homes of loved ones are left unoccupied and unprotected.

That kind of thing still happens, but technology has made the job a lot easier. "Like any useful tool, the bad ends to which it could be put is limited only by the human imagination," Bankston says.

"People should think very carefully before they broadcast personal information to the world, because they don't know who is on the other end of that line."