Accessibility links
Opposition Crackdown In Egypt Heats Up Before Polls Some 150 members of Egypt's largest opposition movement, the Islamist Muslim Brotherhood, are under arrest, with more arrests expected before elections later this year. Analysts say the detentions mark a clear escalation in Cairo's hostility toward the group. 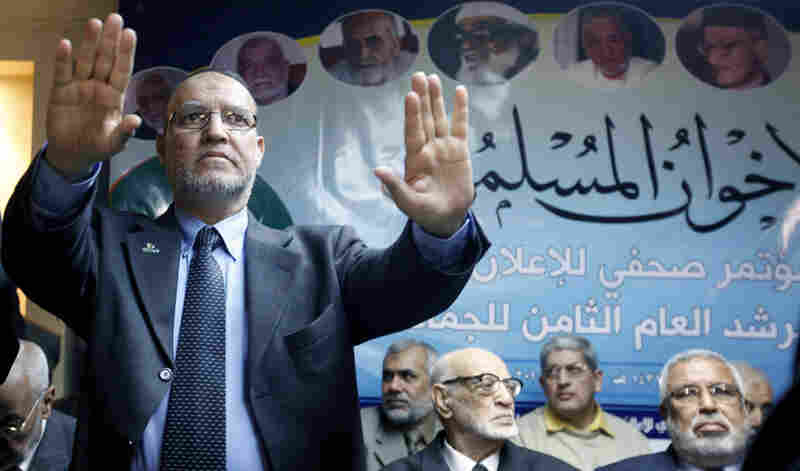 Essam el-Erian, a top official with Egypt's Muslim Brotherhood, shown at a news conference at the Brotherhood's Cairo headquarters in January, was among the opposition group's members arrested earlier this month. Amr Nabil/AP hide caption 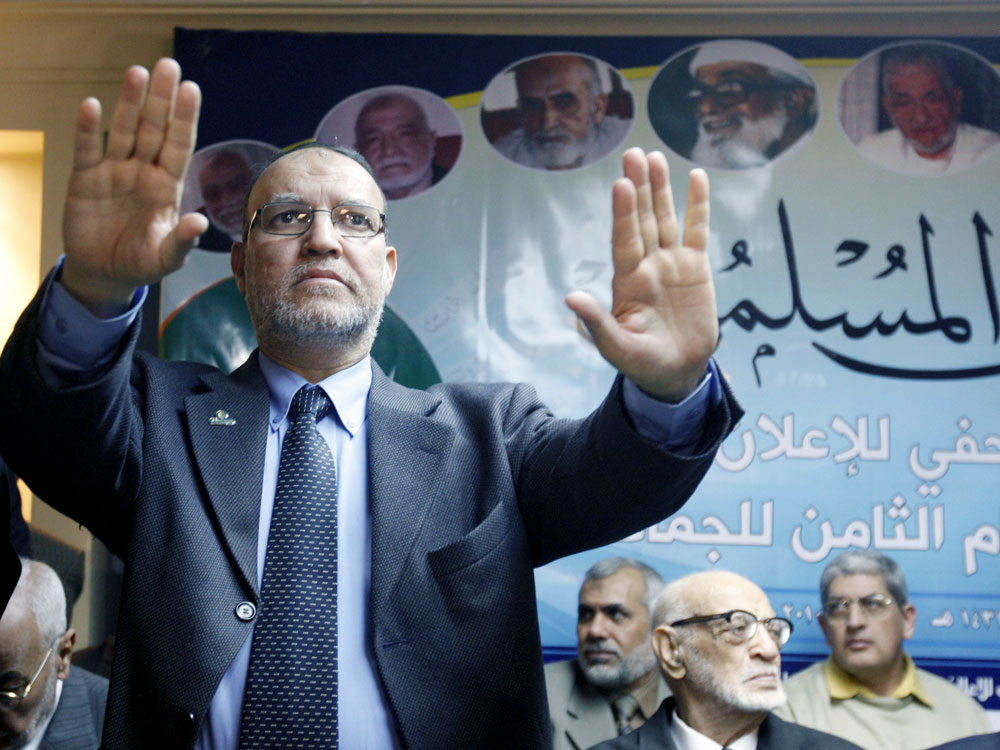 Essam el-Erian, a top official with Egypt's Muslim Brotherhood, shown at a news conference at the Brotherhood's Cairo headquarters in January, was among the opposition group's members arrested earlier this month.

Egypt's largest opposition movement, the Islamist Muslim Brotherhood, is once again facing a crackdown by authorities. Some 150 members are under arrest, according to the group, and more arrests are expected in the run-up to elections for both houses of parliament later this year.

Analysts say this round of detentions marks a clear escalation in the Egyptian government's hostility toward the group.

Earlier this month, when police detained the Brotherhood's chief deputy, Mahmoud Ezzat, and 14 other officials, few Egyptians raised their eyebrows. Roundups occur every few years in a country where the group is officially banned but sometimes tolerated.

But Egyptians were startled by what happened next.

Egyptian officials alleged that a secret cabal within the Brotherhood was conspiring to revive the kind of violent attacks that marked the organization's operations some half a century ago, when the radical thinker Sayyid Qutb's views held sway.

"It's just silly and ridiculous to say there is a group inside the group, and that it's now somehow moving to revive Sayyid Qutb ideas. It's just very strange to listen or to see such accusations," Morsi says.

Qutb was a prolific author on Islam's role in modern life. His best-known works were written in Egyptian prisons, where he is credited with persuading other members of the Muslim Brotherhood — many of whom had been, like Qutb, subjected to torture — that extremism was justified in pursuit of an Islamic state. Qutb was hanged in 1966.

The Brotherhood says his ideas have been distorted and that, in any case, the group renounced violence decades ago.

The government has never accepted that assertion, and analysts say its latest actions signal a return to an earlier, more hostile approach to the Muslim Brotherhood. After the recent arrests, the state prosecutor's office said it also had uncovered a secret cell of female Muslim Brotherhood operatives, comparing it to an earlier group from the 1960s.

Islamist expert Hossam Tammam, writing in the government-backed Al-Ahram newspaper, noted that the current regime is "clearly changing the rules of engagement with the [Brotherhood]."

Independent analyst Mustafa Kamal Sayed says that despite the sensational nature of the latest charges, the government's crackdown essentially conforms to the same calculus it has used in previous election years: When it doubt, jail Muslim Brotherhood members.

"The arrests — I hate to use this expression — they make sense from the point of view of the government," Sayed says. "The government is trying to cripple the movement and to prevent it from launching an effective election campaign."

Analysts in Egypt say the Brotherhood's real affront was managing to have members — running as independents, since the organization is banned — win nearly 20 percent of the seats in parliament in 2005. It is a shock the ruling National Democratic Party has not forgotten, they say.

It may not have helped matters when the Brotherhood held internal elections recently, and the outgoing supreme guide pointedly declared that Egyptian President Hosni Mubarak might do well to take note of how a free, fair and peaceful transfer of power is conducted in Egypt.

Meanwhile, speculation swirls around Mubarak's intentions — whether he plans to run again or the way is being paved for his son, Gamal, to succeed his father.

Instead, the ruling NDP is determined to crush the opposition, Sayed says, with the help of constitutional amendments it pushed though in 2007, which included lifting the requirement for judicial observers in all voting stations.

"It was clear that the intention of the NDP is not to organize free and fair elections in the country. So this has been demonstrated by these arrests," Sayed says.

The election changes won't affect just the Muslim Brotherhood. Supporters of potential presidential challenger Mohamed ElBaradei have launched a campaign to get the changes overturned as a condition for ElBaradei's candidacy.

ElBaradei recently returned to Cairo after stepping down as head of the International Atomic Energy Agency, the U.N.'s nuclear watchdog.

Meanwhile, the Muslim Brotherhood is discussing the new reality and debating to what extent its members should participate in the parliamentary elections in November.

Morsi, the Brotherhood official, says he will also be preparing for the knock on his door that means he, too, is being placed under arrest.

"I am not worried; I am expecting it. Why not?" he says, laughing. "It comes suddenly, like death."