Accessibility links
Bernanke Backs Low Interest Rates Federal Reserve Chairman Ben Bernanke told lawmakers Wednesday the Fed needs to keep interest rates low to aid the economy "for an extended period." He used his semi-annual report to Congress to emphasize his concerns about both unemployment and the budget deficit.

Federal Reserve Chairman Ben Bernanke told lawmakers Wednesday the Fed needs to keep interest rates low to aid the economy "for an extended period." He used his semi-annual report to Congress to emphasize his concerns about both unemployment and the budget deficit.

JIM ZARROLI: This was Bernanke's first trip to Capitol Hill since his reappointment battle last month when he took heat over the way the Fed had handled the big bank bailout. This time, the atmosphere was less contentious. He appeared before the House Financial Services Committee to give his semi- annual assessment of economic conditions. Bernanke said the economy continues to improve. There was no talk of a double-dip recession.

BEN BERNANKE: Indeed, the U.S. economy expanded at about a four percent annual rate during the second half of last year.

ZARROLI: But Bernanke said the rebound was due in part to what economists call an inventory correction. Businesses that let their supply of products dwindle during the downturn are now restocking their shelves. If the rebound is really to last, Bernanke said, consumers will have to start buying more.

BERNANKE: A sustained recovery will depend on continued growth in private- sector final demand for goods and services.

ZARROLI: There already has been some pick up in consumer spending, he said, and business investment is up significantly. But demand won't really take off until the job market improves and right now, it's still very weak. Bernanke said he's especially concerned about the growing number of people who remain unemployed for long periods.

BERNANKE: Indeed, more than 40 percent of the unemployed have been out of work for six months or more, nearly double the share of a year ago.

ZARROLI: And then there's the credit problem. Bernanke said big banks seem to be doing a lot better, but small businesses are having considerable trouble getting credit. Yet for all the problems he cited, Bernanke sounded on the whole surprisingly optimistic, says Mark Vitner, chief economist at Wells Fargo.

ZARROLI: Bernanke spoke at length about the Fed's efforts to unwind some of the extraordinary measures that it's taken to prop up the economy. Since last year, for instance, the Fed has been buying up mortgage-backed securities as a way of pumping money into the housing market. It will stop doing so next month. That's raised concern in some quarters that mortgage rates could rise, but it hasn't happened so far. Bernanke said the Fed would be watching the situation carefully, but he suggested that the impact of the unwinding will probably be mild.

BERNANKE: These adjustments are not expected to lead to tighter financial conditions for households and businesses, and should not be interpreted as signaling any change in the outlook for monetary policy.

ZARROLI: In fact, he said the Fed plans to keep the interest rates it controls at historically low levels for an extended period of time. It can do that because there's virtually no sign of inflation. Bernanke was asked several times about the growing federal budget deficit. At one point, he conceded that addressing the deficit would probably be good for the economy. Bond markets want to know that the trajectory of bigger and bigger deficits will end.

BERNANKE: It would be very helpful - even to the current recovery, to markets' confidence - if there were a sustainable, credible plan for a fiscal exit, if you will. 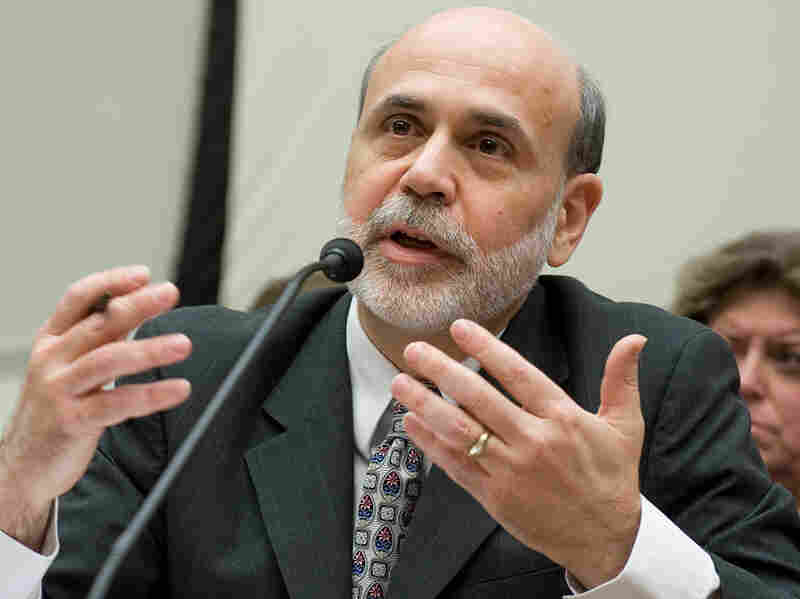 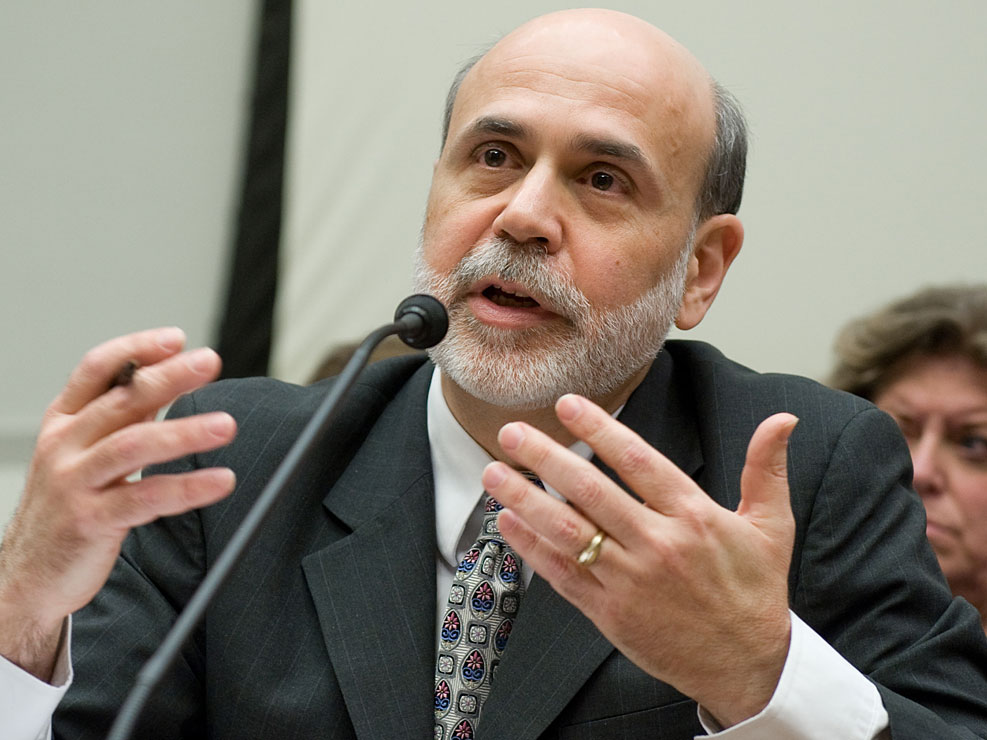 Federal Reserve Chairman Ben Bernanke appeared before the House Financial Services Committee on Wednesday in Washington, D.C., in the first of two days of testimony.

Federal Reserve Chairman Ben Bernanke said Wednesday that interest rates should stay at record-low levels for an "extended period" to ensure that the nation's still-delicate economic recovery remains on track.

During his biannual report to the House Financial Services Committee, Bernanke said expectations of a weak job market and low inflation warrant keeping rates where they are. He gave no hint of when the Fed would step in, noting that unemployment is likely to stay unacceptably high at least into 2012.

Bernanke, in his first appearance before Congress since he was confirmed for a second term, also pledged to give the public a bigger window into the central bank's operations — but not at the expense of the national interest. Critics of the Federal Reserve have said its operations weren't transparent enough as it bailed out financial institutions.

Bernanke said he wants to work with Congress to increase the Fed's transparency so long as changes are consistent with a legal obligation to encourage high employment and keep prices stable.

"It is vital that the conduct of monetary policy continue to be insulated from short-term political pressures," he said. The Fed chief added that keeping the Fed independent of politics is the only way to ensure that it makes policy decisions in the long-term interest of the American people.

As Bernanke testified, the Senate passed legislation intended to help create jobs. By a vote of 70 to 28, senators approved a $15 billion bill that would provide tax breaks to employers and funds for highway spending.

Committee members told Bernanke they wanted to focus on improving the jobs outlook. "Getting people back to work" is critical for the economy, said panel Chairman Barney Frank (D-MA).

The U.S. has lost 8.4 million jobs since the recession began almost two years ago, and unemployment stands at 9.7 percent.

Bernanke reiterated a pledge that the central bank will keep its main interest rate at an all-time low near zero "as the expansion matures." The target range for the Fed's main rate, the federal funds rate, has been between zero and 0.25 percent since December 2008.

Still, Bernanke sought to stress that when the economy is on firmer footing and the Federal Reserve must reverse course and tighten credit for millions of Americans, he will do so.

Investors took Bernanke's remarks in stride. After a two-day slide, the Dow Jones industrial average was up 90, to 10,372, in midday trading.

Deciding exactly when to boost rates will be the Fed's next big challenge. Boosting rates too soon could derail the recovery, but waiting too long could trigger inflation and feed a speculative asset bubble. That, too, could threaten the economy, along with Americans' pocketbooks and nest eggs.

Bernanke would say only that the Fed will need to tighten credit "at some point" and sketched out the Fed's strategy, first unveiled on Feb. 10.

He said the Fed is likely to boost the rate it pays banks on money they leave at the Fed, which would mark a shift away from the funds rate, the Fed's main tool since the 1980s. A bump-up in the interest rate on bank reserves, though, would ripple though the economy in much the same way an increase in the funds rate does. Consumer and business borrowers would have to pay more for loans.

With financial conditions improving, the Fed has been able to wind down most of its special lending programs for banks and others set up during the crisis. But lawmakers remain concerned about the weak housing market.

The Commerce Department reported Wednesday that new-home sales dropped 11.2 percent last month to a seasonally adjusted annual sales pace of 309,000 units — the lowest level on records going back nearly a half century. The drop was a surprise to economists who had expected sales would rise about 5 percent over December's pace.

One key economic revival program that has lowered mortgage rates and bolstered the housing market is slated to end on March 31. The Fed is on track to complete buying $1.25 trillion worth of mortgage securities from Fannie Mae and Freddie Mac at that time, and another $175 billion worth of debt from them.

Bernanke said the program's end would have only a "modest effect" on pushing up mortgage rates, and that it could be extended if the economy worsened.

The Fed's decision last week to raise the rate banks pay for emergency loans was part of a broader strategy to bring lending closer to normal now that the crisis is over, he said. The bump-up in the "discount" rate should not be seen as a signal that tighter credit for consumers and businesses is imminent, Bernanke added.

NPR's Deborah Tedford, Paul Brown and The Associated Press contributed to this report.