Accessibility links
Failed Justice Leaves Rape Victim Nowhere To Turn NPR News Investigation: Margaux was a freshman at Indiana University when, she says, another student living on her floor raped her. The local police refused to prosecute, so Margaux took the case to the campus justice system. In the end, it seemed to Margaux's family that the entire system was designed to just make the victim go away, to pretend the crime never happened. 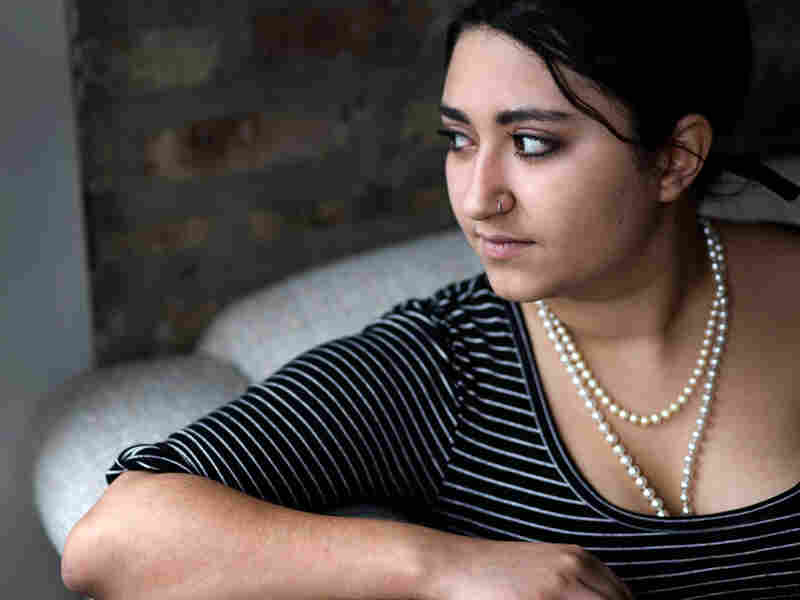 When Margaux decided to push charges against the man who raped her, she found local police unwilling to take the case. Beth Rooney/Aurora for NPR hide caption

In a house outside Chicago, a mother shows her daughter something she keeps in the closet in her office. It's the small, pleated dress her daughter loved to wear as a kid. It's red and white with a megaphone, and the word "Indiana."

"You loved this," Eva says.

"Yeah, I used to wear that all the time," says Margaux, the daughter. "It's a cheerleading outfit, a little cheerleading dress from Indiana University, IU."

So when Margaux grew up and it came time to choose a college, there was pressure to choose Indiana University.

By then, Margaux was an accomplished cellist. And her mother, Eva — who'd been a student at Indiana, herself — wanted her only child to take classes at Indiana's famous music school.

Findings of the Center for Public Integrity and NPR News Investigation:

— The U.S. Department of Education has failed to aggressively monitor and regulate campus response to sexual assault. The department has the authority to fine schools that fail to report crime on campus. In 20 years, the department has used that power just six times. And the department can also find that a school has violated a law that prevents discrimination against women. But between 1998 and 2008, the department ruled against just five universities out of 24 resolved complaints.

— Colleges are ill-equipped to handle cases of sexual assault. Most of the time, alcohol is involved. Local prosecutors are reluctant to take these cases, so they often fall to campus judicial systems to sort through clashing claims of whether the sex was consensual or forced.

To protect the family's privacy, NPR agreed to use only their first names.

On a morning in April 2006, Eva was in her kitchen baking cookies. She was going to send them to Margaux, who was finishing her freshman year. Then the phone rang.

Eva remembers the call: "I had never heard such a desperate, just a truly desperate sound in her voice. She was just sobbing hysterically. And she kept saying 'Mom, Mom, Mom. Mom, Mom,' over and over. And finally I said, 'Margaux, please, tell me what's wrong. What's wrong?' And she said, she said: 'I've been raped.' "

Margaux says, "I just remember, I was laying in my bed in my dorm. I had been out of control all week and crying and just laying in bed crying. But it was like a wailing, loud cry. The girl next door would come by my room and be like, 'Are you OK?' I'm not a big crier, so when I do cry, my parents know something's really wrong."

A Far Too Common Story

Margaux's story is fairly typical for the many women who are sexually assaulted on college campuses. And what's also common is the failure of even the best-intentioned colleges and universities to investigate a criminal matter like rape — and then punish it.

NPR's investigative team collaborated with journalists at the Center for Public Integrity to examine why colleges and universities fail to protect women from assault. The investigation found that even when a man has been found responsible for a sexual assault, he's rarely expelled. And women haven't been able to count on help from the government oversight agency, either.

In Margaux's case, she says she was assaulted after she'd gone out drinking with friends. Her friends dropped her off at her dormitory. She'd had so much to drink that she'd had to vomit. "I think it was maybe 4 o'clock in the morning," she recalls. "And I can't find my keys in my own purse."

A man who lived down the hall — someone she knew, but not well — approached her. "He comes over and finds the keys for me. And I'm hysterically crying. And I look horrible. My nose is running and everything. He finds the keys for me in my purse and opens my door for me with them and lets me in, and I remember feeling, like, 'Oh, that's really nice of him; he's being a good person letting me into my room.' "

Margaux says that the man then raped her in her bed, as she passed in and out of consciousness. The man would say they had sex, but that it was consensual.

One of out 5 women will be sexually assaulted during her college years. And despite federal laws created to protect students, colleges and universities have failed to protect women from this epidemic of sexual assault. Even after they've been found responsible for sexual assault, students are rarely expelled or suspended. NPR News Investigations and the Center for Public Integrity teamed up to examine this ongoing problem on college campuses.

After Jeanne Clery was raped and murdered in her dorm room in 1986, her parents devoted their lives to changing federal law to try to make college campuses safer. It's been 20 years since a federal law was passed in their daughter's name. Still, campus discipline systems rarely expel men when they're found responsible for a sexual assault. And women have been unable to count on help from the government's oversight agency. Read this story.

Margaux was a freshman at Indiana University when another student living on her floor raped her. She reported the assault to campus security, but the judicial hearing did not go as she had hoped. This is the story of her struggle for justice — and to feel safe again.

Even after reporting her rape to campus security, Margaux found that schools often have a limited ability to investigate these complex cases. Read this story.

One reason colleges have a hard time stopping sexual assault is a misconception about who is committing these crimes. The assumption is that rapes are often committed by young men whose judgment is impaired from drinking. But University of Massachusetts forensic psychologist David Lisak says most are serial predators. Read this story.

NPR tried to contact him, but he did not return our requests for an interview. Officials at Indiana University also declined to be interviewed, citing student privacy laws.

A Justice System 'Designed To Make The Victim Go Away'

It's estimated that alcohol is a factor in 50 to 90 percent of campus rapes. "Being drunk did make a difference," says Margaux. Because "when you're a girl and you're obviously drunk, you're putting a target on your back for a predator. So, yeah, it makes a huge difference. But what happened to me is still assault. I mean you can't. There's a reason why it's in the law: A drunk person can't consent."

Every state in the country has sexual assault laws that say when a woman is drunk to the point of passing out, she can't give consent. But local prosecutors are reluctant to take campus sexual assault cases. Especially when — as is common — there was drinking. Or there are few or no witnesses. And it comes down to the woman's word against the man's.

Margaux's parents asked local police to prosecute. They said no.

So Margaux, like most other women, was forced to rely on the campus justice system, which is not a court of law. The campus discipline system doesn't enforce criminal laws. It considers offenses of college conduct codes.

This stunned Margaux's father, Michael, an entrepreneur and lawyer. When he met with campus police, he found their approach too formal and too casual. "The police officer that had handled the case discouraged me from getting an order of protection," he says. "He said that he had interviewed the assailant and put the fear in the assailant so that he would stay away from Margaux. Which was not good enough."

"The entire system seems to be designed to make the victim go away," he concluded. "To pretend that the crime or incident never occurred."

Only 5 percent of women report sexual assaults on campus, according to research funded by the U.S. Department of Justice. Margaux was embarrassed and uncertain whether she wanted to press charges. 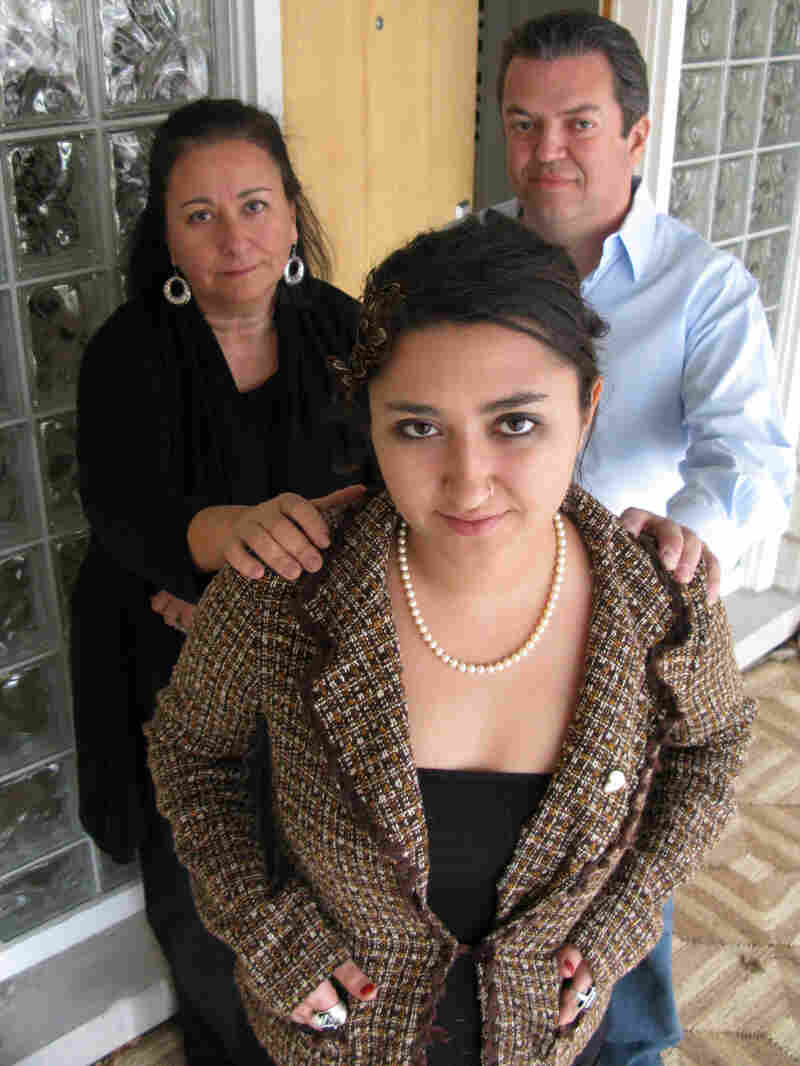 Margaux's parents were shocked at how few options there were for their daughter to prosecute the man who sexually assaulted her. Joseph Shapiro/NPR hide caption

Then, she got an important e-mail. It read:

"Hey girl. This isn't the easiest thing for me to do, but it's something I've been meaning to talk to you about."

The message came from a woman who lived just a few rooms down the hall. It was about the man Margaux accused.

"He has come into my room on two occasions and has forced himself upon me both times," the woman wrote. "Both times were unwillingly on my part. He was drunk both times he came in. My door was unlocked, and he took the liberty of just walking in."

The woman said she'd been able to fight off the man both times. That's one reason she didn't report those incidents.

It turned out campus police were already aware of the man, who was also a freshman. He'd been arrested and charged with a felony just a few weeks after he arrived on campus. He'd jumped into a fight and hit a male student so hard that the young man had crashed to the sidewalk and was taken to the hospital, unconscious.

Margaux was scared of the man she accused of raping her. But she decided to ask the school to start a campus judicial hearing.

She expected that hearing would determine the truth of what happened that night in her dorm room. And that the man she accused would get expelled. "It was a pretty, I thought pretty black-and-white case," she says. "And yeah, it should have been like, alright game over. Can't do that. Throw the book at you."

But that hearing would not go as Margaux had expected. And Margaux would feel she didn't get protection — or justice.

Friday, the story continues: Margaux goes before a campus judicial hearing and is forced to make an unexpected decision about her future.