Accessibility links
As Leno Goes Late Again, Is His Brand Still Strong? The host's affable-uncle persona may have taken on some tarnish during the high-profile battle over NBC's Tonight Show and its time slot. But will it damage his performance once he's back where many fans think he belongs? 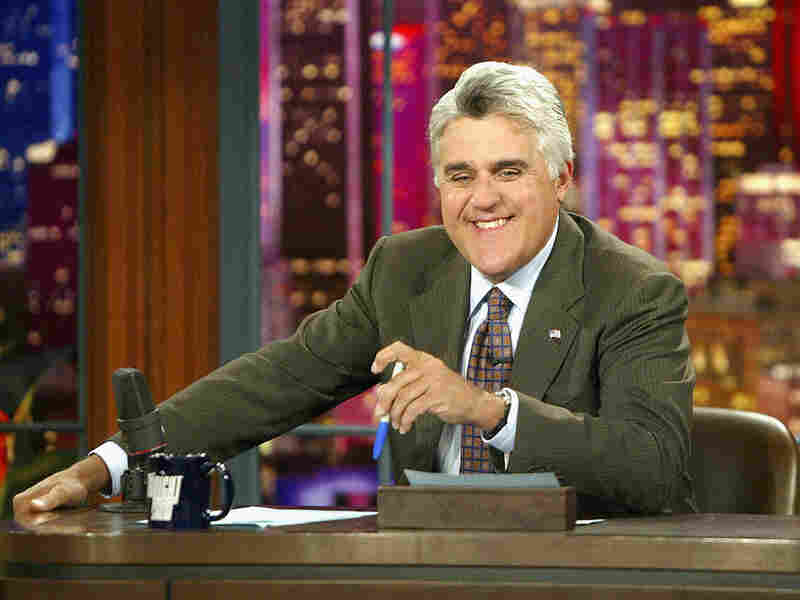 Still Smiling? Jay Leno, seen here in 2004 behind the desk on his old Tonight Show set, returns to the show March 1 — but may be bringing some baggage along. Kevin Winter/Getty Images hide caption 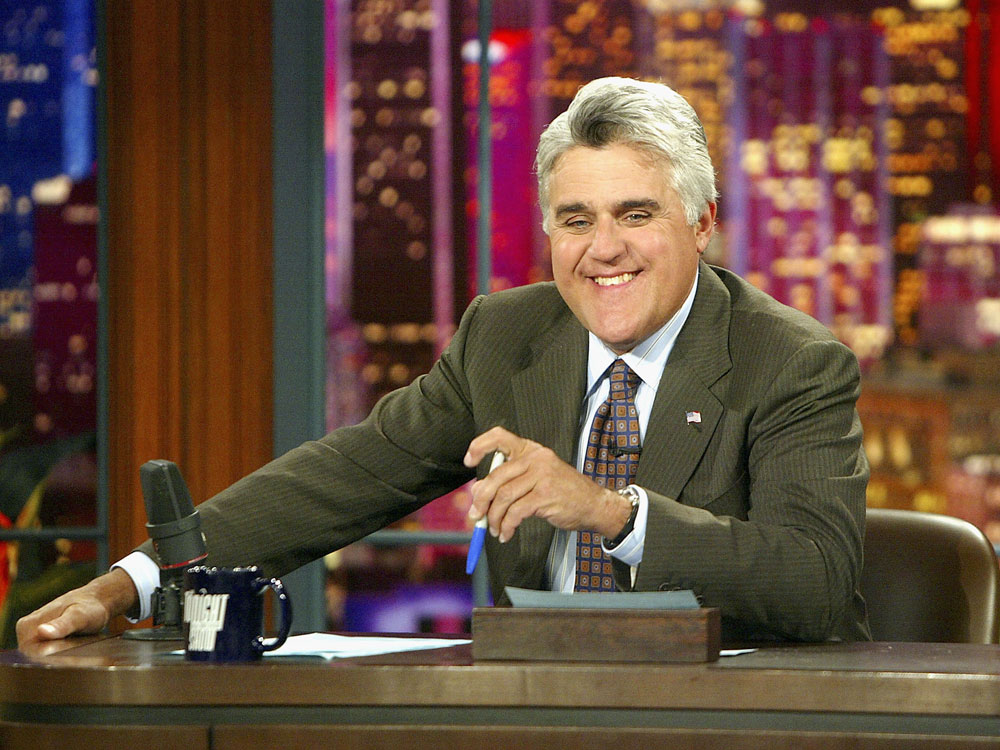 Still Smiling? Jay Leno, seen here in 2004 behind the desk on his old Tonight Show set, returns to the show March 1 — but may be bringing some baggage along.

On March 1, Jay Leno makes his big move back to The Tonight Show. In case you've been living on a desert island: Last year NBC moved Leno to prime time, but his new show did poorly in the ratings. So now he's retreating to the 11:35 slot. And Conan O'Brien, who'd taken over as Tonight Show host, quit NBC altogether.

The whole thing has been a disaster for NBC, and possibly for Leno, whose personal brand may have taken a hit from the fiasco. Just ask Ad Age columnist Simon Dumenco, who says watching Leno is "like eating stale Funyuns."

"His brand of humor just feels extremely dated," Dumenco says. And while stale Funyuns might be OK in late-night, they're not for dinner: "Stuff that kind of worked at 11:35 just didn't seem as funny when you're wide awake at 10 o'clock." And a lot of those wide-awake viewers voted with their remotes.

TV comedy and our taste in wit has changed. We like the irony of Jon Stewart and the cynicism of Bill Maher. And Leno, Dumenco says, hasn't kept up.

Jawn Murray, who writes about entertainment for AOL Black Voices, sees it differently. Leno's brand of humor might not be hip, he says, but it is more mainstream.

"He has a very upbeat sensibility about him," Murray says. And of the two late-night brands that will once again be competing, Murray thinks Leno's brighter personality will again beat out David Letterman's sarcasm.

"Jay stays more relevant to pop culture and contemporary topics," says Murray. "And he has a very nonthreatening personality."

Leno's image is that he's like the friendly uncle who loves cars and a good clean joke. In ads for his return to The Tonight Show, he's pictured driving a snazzy sports car or high-fiving his fans. But lately the nice guy has been accused of bullying Conan O'Brien out of the Tonight Show spot so he can take it back. At least one well-informed observer says that may sour some fans.

"There's a sense he'll do well but not as well as he used to, at least initially" says Bill Carter, whose book The Late Shift chronicled the late-night wars of the 1990s, when Leno and Letterman were fighting for Johnny Carson's chair. "But Jay is indefatigable. One thing I know about Leno is he won't let up. He'll throw himself into this."

Even Leno has acknowledged his brand is tainted.

"I think there's a lot of damage control that has to be done," he said during a televised heart-to-heart on Oprah Winfrey's talk show. "The only way you can fix these things is to try and do good shows — not be bitter, not be angry or upset."

Leno might not show any bitterness moving forward. But he did get some pretty good jokes out of being jerked around by NBC — and by his biggest rival.

"Letterman's been hammering me every night, going after me," he acknowledged on one January broadcast of his own show. Then came the punch line: "Y'know the best way to get Letterman to ignore you? Marry him."

Ultimately, the brand strategy for Jay Leno's new Tonight Show is anyone's guess. But Carter argues that the formula for the show isn't seriously broken — so Leno shouldn't try too hard to fix it.

Meanwhile, curious observers may be able to glean something about how it'll work from next week's heavily promoted lineup of guests — among them Jamie Foxx, Sarah Palin and the cast of Jersey Shore.