Accessibility links
Hamas Assassination Draws Wide Praise In Israel The murder of Hamas operative Mahmoud al-Mabhouh last month in Dubai has had serious diplomatic repercussions for Israel. But many ordinary Israelis say they are proud of the assassins for eliminating an enemy thought to have killed two Israeli soldiers in 1989. 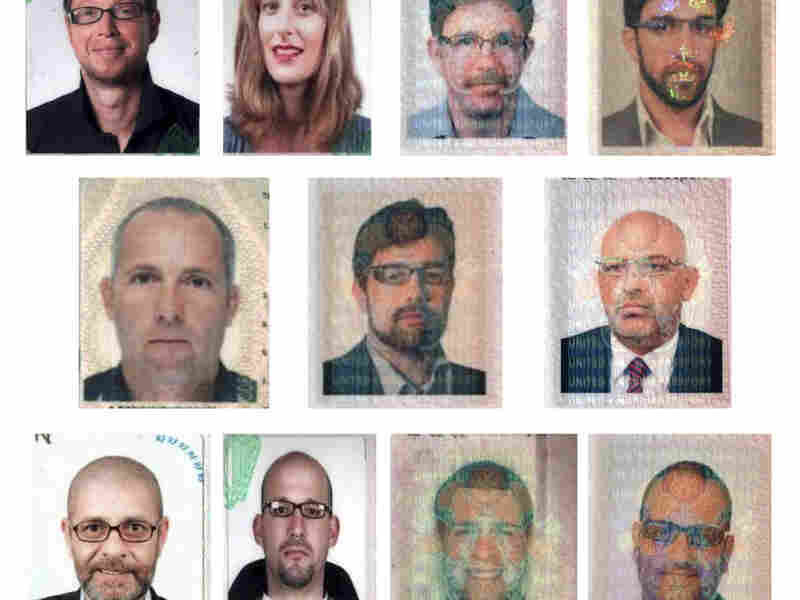 This combination image shows 11 of the 26 suspects wanted by Dubai police in connection with the killing of a Hamas commander, Mahmoud al-Mabhouh, in his Dubai hotel room last month. (Click enlargement for more information.) Dubai Ruler's Media Office/AP hide caption 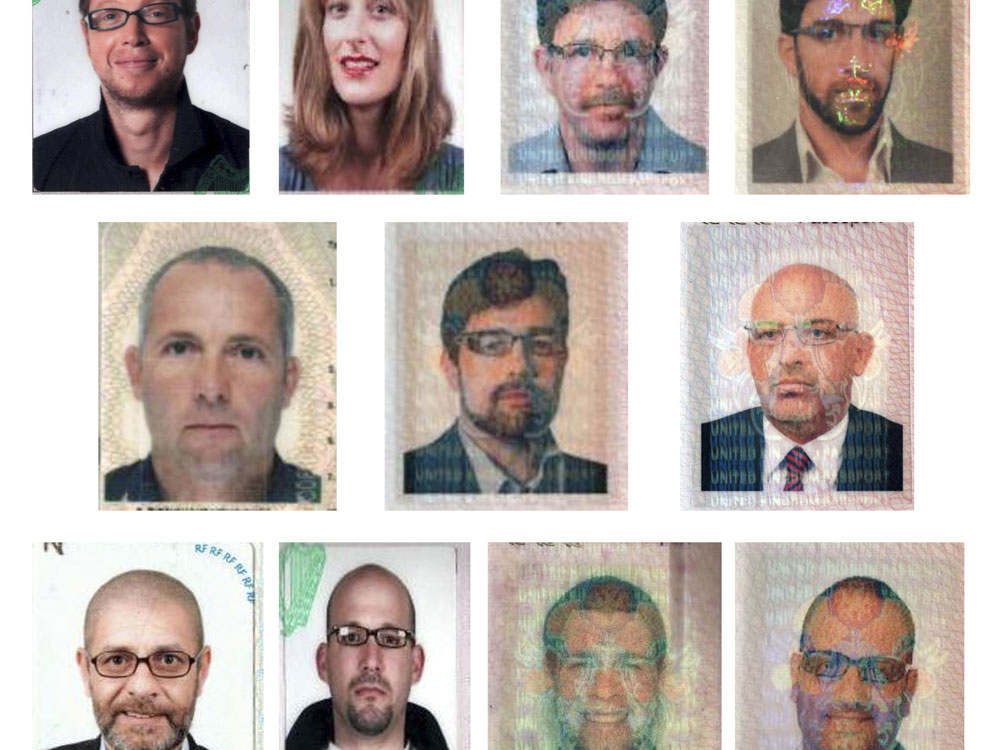 The murder of a Hamas operative in Dubai last month has had serious diplomatic repercussions for Israel. Dubai's police chief says 26 people, carrying forged European and Australian passports, were involved in the plot, and he says he is "99 percent" certain Israel's intelligence service, the Mossad, was responsible for the killing.

Israel's government has maintained an official silence on the assassination of Hamas leader Mahmoud al-Mabhouh. Some Israeli analysts are calling it a botched operation because the assassins left behind too many clues.

But many ordinary Israelis say they are proud of the assassins for eliminating an enemy believed responsible for the killing of two Israeli soldiers in 1989.

The identities of a number of binational Israelis have been linked to the assassination, apparently because the forged passports used by suspects in the case carried the names of innocent people.

Israeli Daniel Bruce was caught unaware when Israel's Channel 2 News informed him by phone that he had been named as a suspected assassin of Mabhouh after Dubai police found a fake Australian passport.

Bruce's first response was to laugh.

"Great for me, I guess," he said. Then, the presenter asked if he was scared.

"Actually, no. I guess I should have been scared, but they've managed to take out another terrorist, so it's better," he said.

Israeli officials have refused to confirm or deny involvement in Mabhouh's death. But across the Jewish state, news of the assassination has been met with a wink, a nod and newfound pride in the Mossad.

Uri Ochayon, a bakery owner in Jerusalem, has been greeting his customers with jokes over the Mabhouh assassination.

"Listen, we're fulfilling the fantasies of many countries all over the world who want to do this but don't have the means. We have the means. It's a great thing, so we'll laugh at this and just move on," Ochayon says.

He shrugs off international anger over the killing and the growing number of accusatory fingers pointed at Israel.

On Wednesday, Dubai police released additional information about suspects involved in Mabhouh's death. Ten of the 26 suspected assassins share names with Israelis — a coincidence Dubai police say is simply too great to be ignored.

Israel is a small country where everyone knows everyone, Ochayon says, so the operation could have been carried out by your neighbor, friend or customer.

Or Kashti, the education correspondent for Israel's left-wing daily Haaretz, proudly wrote about being mistaken for one of the Dubai assassins. Kashti said he even received phone calls from friends asking why he hadn't bought them cigarettes from the duty-free shops in Dubai.

In a small health food store in Jerusalem, a number of customers have mistaken 37-year-old Guy Chen for one of the alleged assassins, to which he bears an uncanny resemblance.

He's not one of them, he says, but he's still proud of the work they did.

"Every terrorist that is eliminated, we are happy about, we give our blessings. Who took him out? We don't know. But of course we have an interest in this man no longer being alive," Chen says.

While some Israelis have criticized the Mossad for its alleged involvement in the killing, most have taken issue only with the supposed trail of evidence the assassins left in their wake.

Dubai's advanced surveillance cameras caught what officials say were the killers in various parts of the city, and airport immigration officials matched names and passport numbers to the images.

Britain, Ireland, Germany, France and Australia are investigating claims that the killers used false passports from their countries to enter Dubai. And at least some of the Israelis whose names appear on the suspect list are not happy about it.

Speaking on Israeli TV Wednesday night, Adam Korman said he could not have been more surprised to see his name on the list of alleged assassins.

"They took our passport numbers without asking. It's a shock. We have no idea what kind of problems this will create," he said.

Still, most Israelis found time to joke as they pored over the photos of the 26 suspects, 14 of whom wore glasses with thick frames.

According to Israeli radio, that style is now being requested across the country. They're calling it "the assassin look."