Accessibility links
South Korea's Kim Shatters Record To Win Skating Gold South Korean figure skater Kim Yu-na shattered her world record for points with a performance likely to be remembered as one of the best of all time, while the U.S. nabbed its first gold medal in a Nordic event. Canada's women's hockey team also won gold, but their raucous after-party may tarnish the victory. 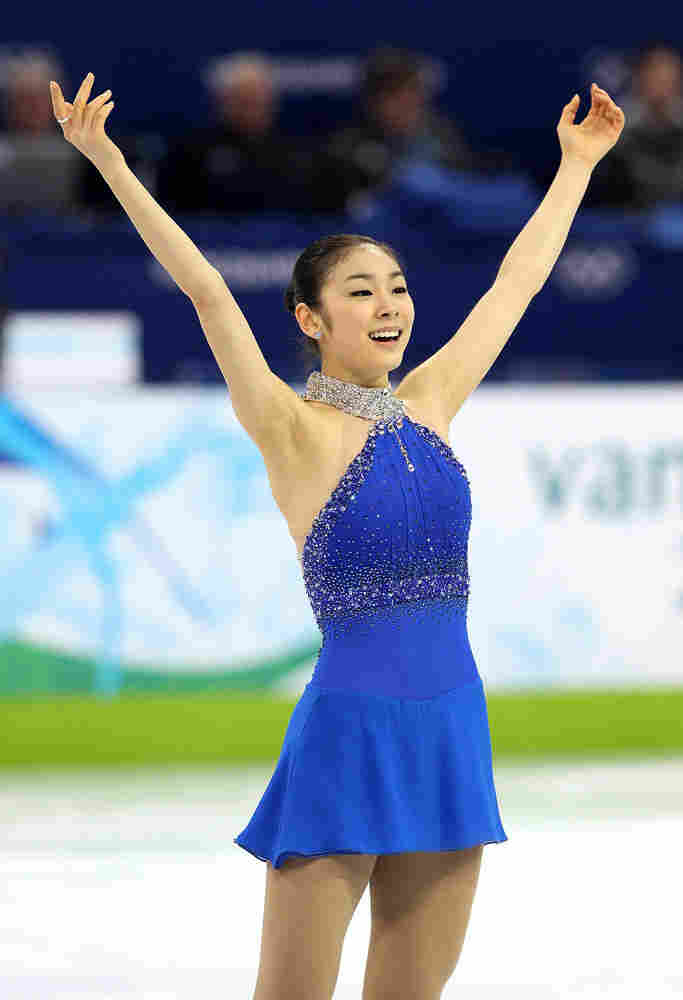 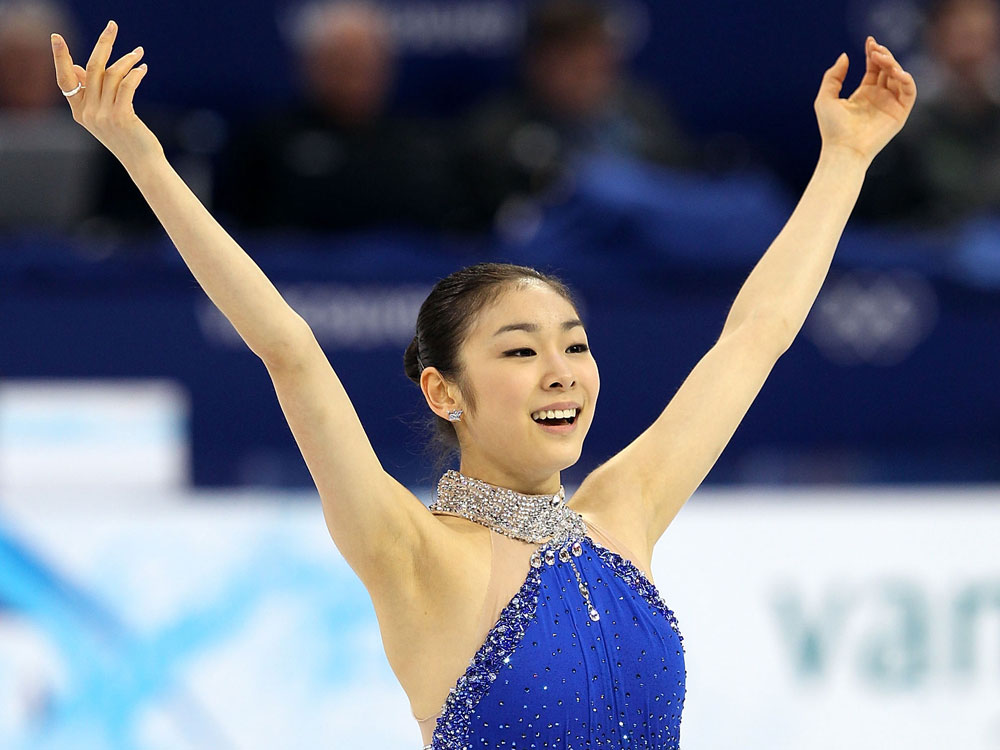 Kim Yu-na of South Korea reacts after her free skate on Day 14 of the 2010 Vancouver Winter Olympics.

South Korean figure skater Kim Yu-na stunned the Vancouver Olympics with a performance likely to be remembered as one of the best of all time and giving her country its first gold in the sport, while the U.S. nabbed its first gold medal in a Nordic event.

Canada also grabbed gold Thursday when the women's hockey team beat the United States 2-0 for a third-straight Olympic title — avenging an earlier loss by the men's squad. But the players' booze and smoke-filled celebration on the ice has raised the ire of some Olympic officials.

Kim, 19, the reigning world champion, shattered her own world record for points. She gasped when her score of 228.56, more than 18 higher than the previous mark, was posted. It resulted in South Korea's first medal at the Winter Olympics in a sport other than speed skating.

"The Queen," as she is known, entered the free-skate with a comfortable lead after Tuesday's short program. Kim's longtime rival, Mao Asada of Japan, tried to stay close with two clean triple axels, the toughest jump in women's skating. But the rest of Asada's performance was marred by nervous mistakes and she skated away with a silver.

Canada's Joannie Rochette won bronze with a courageous performance just four days after her mother died of a heart attack. "I just went out there and did what my mother would have wanted me to do," she said.

Elsewhere on center ice, the Canadian women's hockey team delivered the country's eighth gold medal, the most it has ever won at a Winter Olympics.

Marie-Philip Poulin scored both goals, and goalie Shannon Szabados left the Americans without a single score on 28 shots. Several U.S. players were in tears, including four-time Olympians Angela Ruggiero and Jenny Potter, who was joined on the ice by her two children during the medal presentation. The Canadian crowd raised a chant of "U-S-A!" as the players got their bouquets. 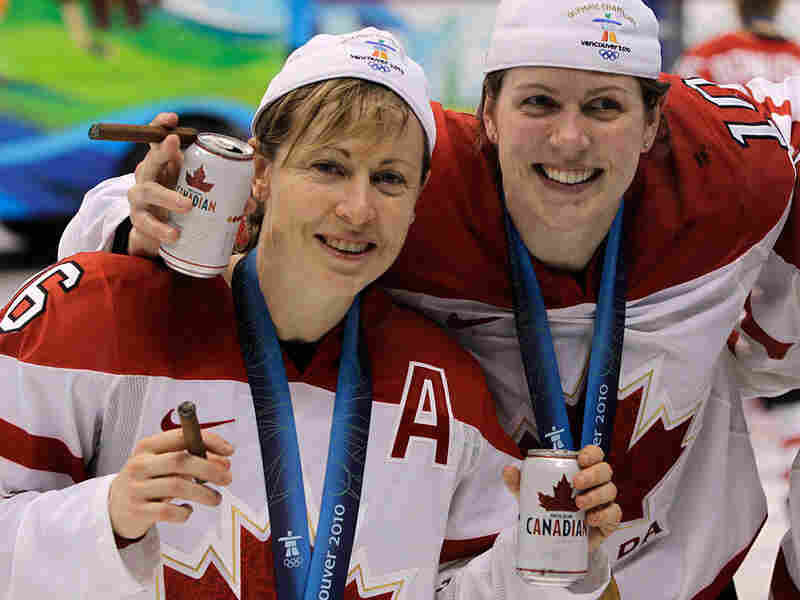 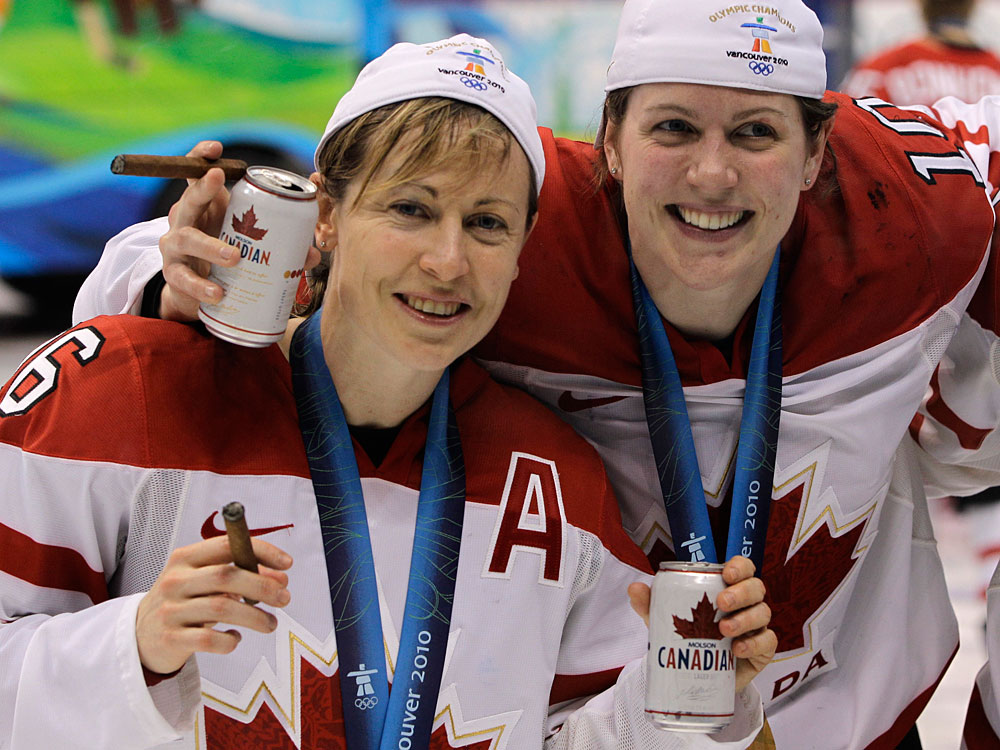 "When you give your whole life to something and you come up short, as a team, it's just awful," Ruggiero said. "It's a little different than playing on the men's side. You really give your life to it. You make lots of sacrifices to win the gold medal."

After the crowds cleared out, 14 players returned to the ice. Photos already cascading through cyberspace show one underage player with a beer. Another poured champagne into the mouth of a third. And yet another player was smoking a cigar — all while still in uniform and with gold medals around their necks.

It was not what the International Olympic Committee wants to see, says Gilbert Felli, the group's executive director of the Olympic Games. He added that it is not a good promotion of sports values and said the IOC would investigate the players' behavior.

A spokesman for the Canadian Olympic Committee says there was no intention to violate Olympic protocol.

Up in the mountains, U.S. racers Billy Demong and Johnny Spillane finished 1-2 in the large hill competition at Nordic combined — a surprising medal haul considering that no Americans had ever medaled in a sport that has been part of the Winter Olympics since 1924.

"I think it has been building over the past five to 10 years," Demong said. "These Olympics are the combination of years of hard work and hard breaks."

A silver medal by Jeret "Speedy" Peterson in men's aerials put the U.S. medal count at 32, with eight golds. The Americans are closing in on their record hauls of 10 gold out of 34 total, both set at the 2002 Salt Lake City Games.

Lindsey Vonn and Apolo Anton Ohno will make their final Olympic appearance Friday, each hoping to add more medals to their Vancouver totals.

Speed skater Ohno has a shot at two more: one in the 500 meters and another in the 5,000 relay. The women's 1,000 meter race is also on the short track schedule.

Vonn, who broke her pinkie after a crash this week, will compete in the slalom.

From NPR's Scott Neuman, Tom Goldman and Howard Berkes, with additional material from The Associated Press

How To Be A Skating Score Nerd: The Futile Search For Understanding Feb. 25, 2010
Joannie Rochette: The Fine Line Between Empathy And Voyeurism Feb. 24, 2010