Accessibility links
Foreign Policy: Paying For Russia's Worst Olympics With only a few more days to go until the end of the games, Russia so on track for its worst Winter Olympics showing in history. Miriam Elder of Foreign Policysays that the embarrassment behind their 13 medals has prompted sharp consequences for Sports Minister Vitaly Mutko. 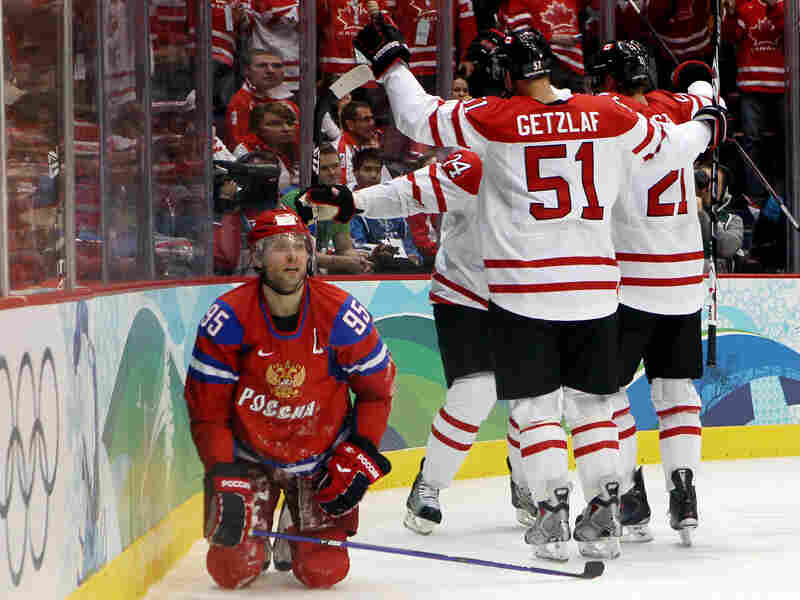 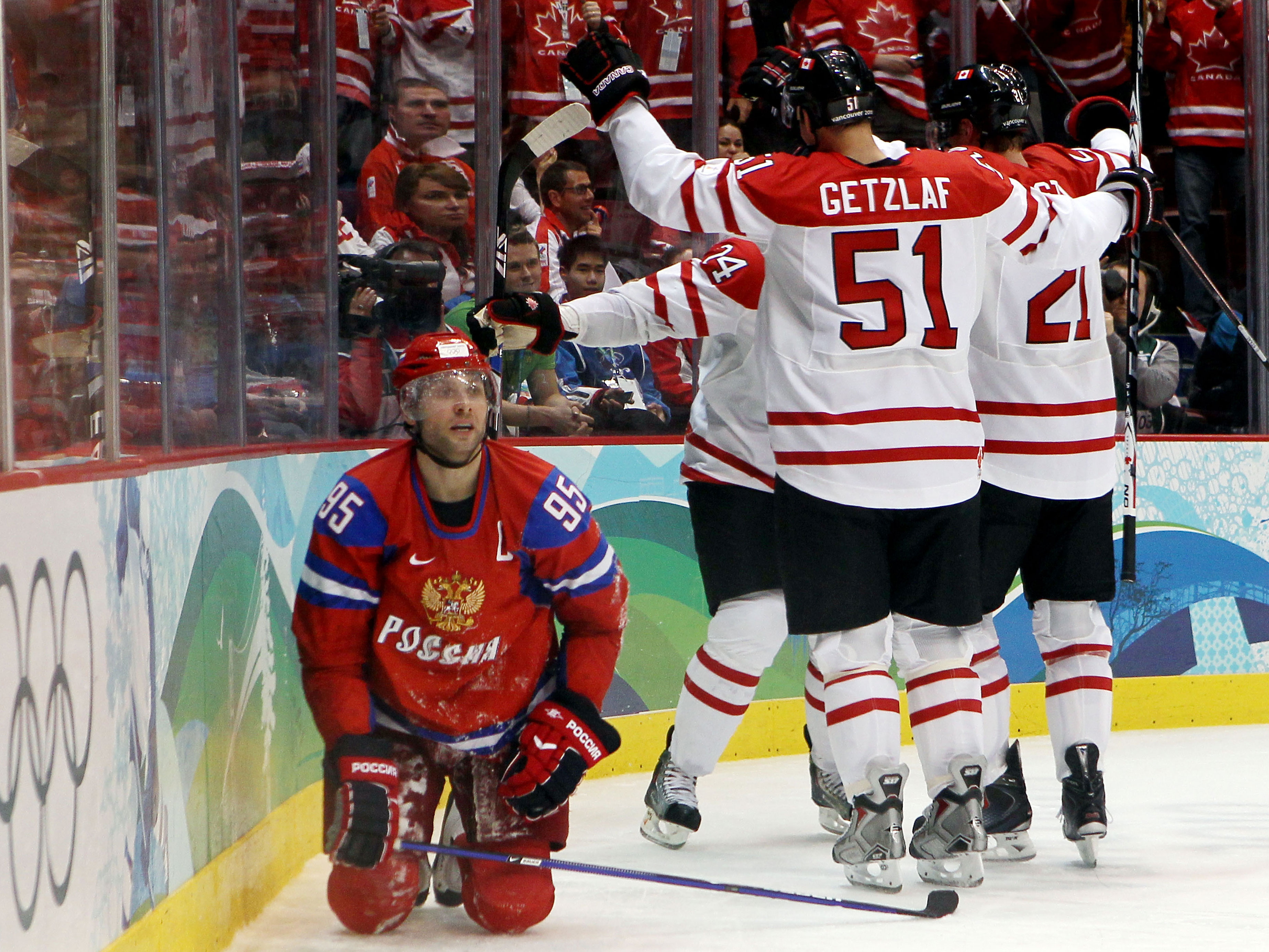 Corey Perry #24 of Canada celebrates with his team after scoring a goal as Alexey Morozov #95 of Russia looks on during the ice hockey men's quarter final game between Russia and Canada on day 13 of the Vancouver 2010 Winter Olympics. (Photo by Bruce Bennett/Getty Images)

There's an old Soviet joke that has Richard Nixon and Nikita Khrushchev running a race around the Kremlin. It's the height of the Cold War and Nixon wins. A Soviet journalist asks, "How do we report that?" A Kremlin official answers, "Say Premier Khrushchev took an honorable second place." And Nixon? "Say that he came second to last."

Russia's dismal showing at the Winter Olympics in Vancouver has proven even harder to spin.

With four days to go until the end of the games, Russia is on track for its worst showing ever in a Winter Olympics. It has only 13 medals to its name — well behind the United States' leading 28 — and just three of those are gold.

Its current standing puts it in fifth place in the medal count. In most countries, that would be respectable. In Russia, a country raised on Soviet-era sporting glory, it's a downright tragedy.

The humiliations keep piling up. For the first time in 12 Olympics, a Russian team failed to take gold — or any medal for that matter — in pairs figure skating. For the first time in the same period, Russia took home no figure skating golds at all. Then there were the events of Wednesday night, when Russia's vaunted hockey team lost 3-7 to Canada. "Olympian Catastrophe," "Nightmare in Vancouver," "The Red Machine Runs into a Maple Tree" read the front-page headlines in Moscow.

The country is in an uproar — when it's not battling a collective depression. The fact that Russia is due to host the next Winter Olympics, in the southern city of Sochi in 2014, has only added insult to injury.

Yet rather than launching a nationwide dialogue on the state of the country's athletics, the immediate instinct has been to reach for official blood.

The Liberal Democrats, a far-right nationalist party that holds seats in the State Duma, launched calls for the sacking of Sports Minister Vitaly Mutko. United Russia, the ruling party headed by Prime Minister Vladimir Putin, didn't seem to think that was a bad idea.

"Anything under fourth place for our team will certainly be a failure, including for those who oversee athletics in our country," said Boris Gryzlov, one of the party's top officials, in a speech. Mutko has been called to address the Duma when he gets back from Canada.

No one has mentioned, however, that those who oversee athletics in Russia often have few sports credentials other than close ties to Putin (who is, after all, a judo master). Mutko, who was appointed sports minister last year, was deputy mayor of the St. Petersburg mayor's administration where Putin got his start in politics in the 1990s.

"In Soviet times, success in sports was one of those symbolic things that showed the population it was ruled by a successful government and a successful political regime," said Alexander Kynev, a political scientist, in an interview." During the past 10 years, when oil prices were high and money was pouring in, we spent it buying expensive trainers and waging PR campaigns. But there were no changes to infrastructure," he said.

Svetlana Zhurova, a United Russia Duma deputy who took gold in speed skating at the 2006 Turin Olympics, disagrees and thinks it's the Russian people who are to blame.

"Many say [our poor performance is the result of] less financing because of the crisis of the 1990s, but that's not it," Zhurova said by telephone from Vancouver. "It's the mentality of our people and our kids."

"Our people don't want to see athletes make something of themselves — they think they can't do anything meaningful because they've just been training all their lives," she said.

Many have rallied behind Evgeny Plushenko, the man with the golden mullet, though likely not for his sportsmanship. One week after he lost the gold to American Evan Lysacek, the champion ice skater continues to insist he will challenge the result and likened Lysacek's style to "dancing" rather than "skating" because he failed to perform a quad jump. Plushenko's trainer has had to deny reports on the skater's own website that his silver medal was presented as "platinum." In the spirit of Soviet spin, Putin tried lifting his spirits by sending a telegram saying "Your silver is worth gold," but even that didn't do the trick.

If you ask Putin's team, it's a question of fate. "Other teams are having more luck," said a spokesman for the prime minister. No decision had been made on punitive actions for Russia's dismal performance, he added.

No matter what the Kremlin decides, it likely won't be as extreme as the measure proposed by an exasperated Vyacheslav Bykov, the Russian hockey coach. When asked whether someone should suffer for the team's crushing loss, he told the media, "Let's put up guillotines on Red Square. Or gallows. We have 35 people in our delegation — let's finish them all off."